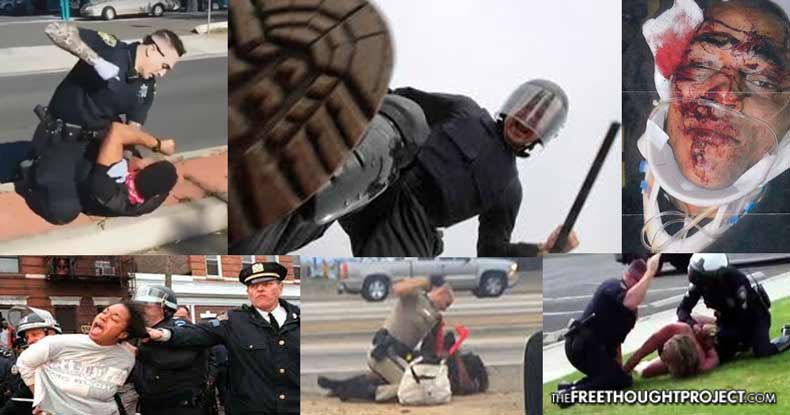 Newark, NJ — A court case was decided this month by an appellate court in New Jersey which affirmed that citizens are allowed to defend themselves against police brutality.

The court’s decision involves the case of Darnell Reed, 33, who was beaten to a bloody pulp by officers during an arrest in 2013 in which he faced multiple charges. A jury found him not guilty on seven of the eight charges, with the only guilty charge being that of “resisting arrest.”

However, the appellate court ruled last week that Reed was denied a fair trial in that instance, as the jury had not been instructed to consider whether or not Reed had that right to defend himself against police brutality.

On April 1, 2013, Reed was targeted by two police officers who claim they saw him holding a brick of heroin. The officers claimed that Reed ran from them and then resisted when they attempted to bring him in.

However, as the court noted, “It is likely that the jury found aspects of the testimony of the State’s witnesses to be less than credible. Given these circumstances, the evidence of guilt can hardly be characterized as overwhelming.”

The two officers were identified in court records as Louis Weber and Manuel Souto. They were dressed in plainclothes and were in an unmarked car when they attempted to apprehend Reed.

As NJ 1015 reports, the cops repeatedly struck Reed’s ribs and threw him to the ground. His face was left bloodied and swollen and his blood covered the ground. The appellate decision says more than 10 of his dreadlocks “were forcibly ripped from his scalp.” Reed had to be hospitalized and still suffers from pain in his rib cage.

To come to their decision, the court referenced the long-standing precedent set in State v. Mulvihill, which notes:

“If in effectuating the arrest or the temporary detention the officers employs excessive and unnecessary force, the citizen may respond or counter with the use of reasonable force to protect himself, and if in doing so the officer is injured no criminal offense has been committed.”

As the court noted, a citizen “loses his privilege of self-defense if he knows that if he submits to the officer, the officer’s excessive use of force will cease.”

However, the court explained, that self-defense instruction to the jury is required even if the defense attorney does not require it.

Viewed most favorably to the defendant, the evidence supported a finding that the officers used unnecessary and excessive force against defendant, thereby providing a rational basis for a self-defense charge. Therefore, the trial court should have given the jury a self-defense charge as part of its resisting arrest instructions. Kelly, supra, 97 N.J. at 200; State v. Simms, 369 N.J. Super. 466, 472-73 (App. Div. 2004). The failure to instruct the jury that legitimate self-defense is a justification for resisting arrest where the facts reasonably could support that defense constitutes plain error. Simms, supra, 369 N.J. Super. at 473.

Because the officers were found to have used excessive force and severely injured Reed, the court noted that Reed would have been justified in defending himself against his abuse.

Therefore, the defendant was entitled to a self-defense charge and its omission from the jury instructions was plain error.

While this case is not held as a precedent, the court’s opinion is not without merit. Self-defense is a natural right; when laws are in place that protect incompetent police by removing one’s ability to protect one’s self, simply because the aggressor has a badge and a uniform, this is a human rights violation.

This ruling is also supported by an Indiana law which allows for citizens to shoot at police officers who unlawfully enter their homes.

In that case, Indiana took action to “recognize the unique character of a citizen’s home and to ensure that a citizen feels secure in his or her own home against unlawful intrusion by another individual or a public servant.”