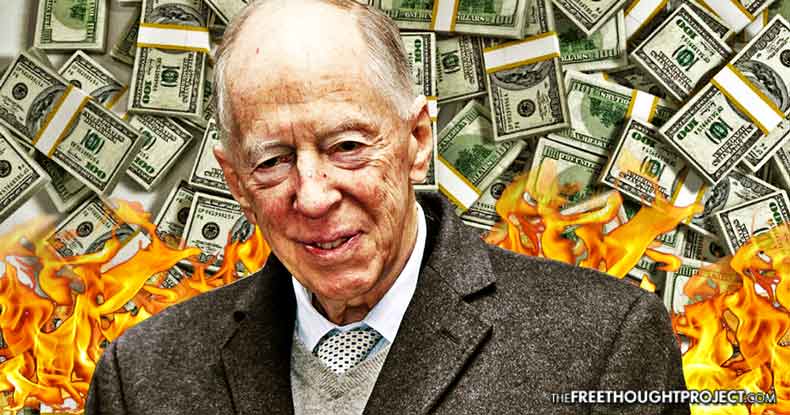 The Economist magazine published an article almost thirty years ago, discussing the prospect of a world currency that should be expected around the year 2018. The 1988 article foreshadows a methodical movement towards a centralized world currency that we have, in many ways, seen play out over the past few decades.

One must also keep in mind that the controlling interest of The Economist is held by the powerful Rothschild family, who regard themselves as the “custodians of The Economist magazine’s legacy.” In essence, the magazine operates as a quasi-propaganda arm for the Rothschild banking empire and related businesses and, is in many ways, meant to prime the pump of public opinion for the globalist agenda to be implemented.

Ready for the Phoenix

THIRTY years from now, Americans, Japanese, Europeans, and people in many other rich countries, and some relatively poor ones will probably be paying for their shopping with the same currency. Prices will be quoted not in dollars, yen or D-marks but in, let’s say, the phoenix. The phoenix will be favoured by companies and shoppers because it will be more convenient than today’s national currencies, which by then will seem a quaint cause of much disruption to economic life in the last twentieth century. –
At the beginning of 1988 this appears an outlandish prediction. Proposals for eventual monetary union proliferated five and ten years ago, but they hardly envisaged the setbacks of 1987. The governments of the big economies tried to move an inch or two towards a more managed system of exchange rates – a logical preliminary, it might seem, to radical monetary reform. For lack of co-operation in their underlying economic policies they bungled it horribly, and provoked the rise in interest rates that brought on the stock market crash of October. These events have chastened exchange-rate reformers. The market crash taught them that the pretence of policy co-operation can be worse than nothing, and that until real co-operation is feasible (i.e., until governments surrender some economic sovereignty) further attempts to peg currencies will flounder.

The biggest change in the world economy since the early 1970’s is that flows of money have replaced trade in goods as the force that drives exchange rates. as a result of the relentless integration of the world’s financial markets, differences in national economic policies can disturb interest rates (or expectations of future interest rates) only slightly, yet still call forth huge transfers of financial assets from one country to another. These transfers swamp the flow of trade revenues in their effect on the demand and supply for different currencies, and hence in their effect on exchange rates. As telecommunications technology continues to advance, these transactions will be cheaper and faster still. With unco-ordinated economic policies, currencies can get only more volatile.

In all these ways national economic boundaries are slowly dissolving. As the trend continues, the appeal of a currency union across at least the main industrial countries will seem irresistible to everybody except foreign-exchange traders and governments. In the phoenix zone, economic adjustment to shifts in relative prices would happen smoothly and automatically, rather as it does today between different regions within large economies (a brief on pages 74-75 explains how.) The absence of all currency risk would spur trade, investment and employment.

The phoenix zone would impose tight constraints on national governments. There would be no such thing, for instance, as a national monetary policy. The world phoenix supply would be fixed by a new central bank, descended perhaps from the IMF. The world inflation rate – and hence, within narrow margins, each national inflation rate- would be in its charge. Each country could use taxes and public spending to offset temporary falls in demand, but it would have to borrow rather than print money to finance its budget deficit. With no recourse to the inflation tax, governments and their creditors would be forced to judge their borrowing and lending plans more carefully than they do today. This means a big loss of economic sovereignty, but the trends that make the phoenix so appealing are taking that sovereignty away in any case. Even in a world of more-or-less floating exchange rates, individual governments have seen their policy independence checked by an unfriendly outside world.

As the next century approaches, the natural forces that are pushing the world towards economic integration will offer governments a broad choice. They can go with the flow, or they can build barricades. Preparing the way for the phoenix will mean fewer pretended agreements on policy and more real ones. It will mean allowing and then actively promoting the private-sector use of an international money alongside existing national monies. That would let people vote with their wallets for the eventual move to full currency union. The phoenix would probably start as a cocktail of national currencies, just as the Special Drawing Right is today. In time, though, its value against national currencies would cease to matter, because people would choose it for its convenience and the stability of its purchasing power.

The alternative – to preserve policymaking autonomy- would involve a new proliferation of truly draconian controls on trade and capital flows. This course offers governments a splendid time. They could manage exchange-rate movements, deploy monetary and fiscal policy without inhibition, and tackle the resulting bursts of inflation with prices and incomes polices. It is a growth-crippling prospect. Pencil in the phoenix for around 2018, and welcome it when it comes.

Only ten years later, in 1998, The Economist was once again engaging the public in an effort to forward the globalist agenda, with an article entitled “One world, one money.”

Very much in line with the 1988 piece, the publication attempts to explain why a much more centralized and controlled system would be beneficial to the global economy, while wholly ignoring the fact that such a centralized global currency would be a massive coup for the international banking cartel, and the Rothschild banking empire’s financial bottom line.

Additionally, it must be noted that the creation of a global currency would give an inordinate amount of geopolitical capital to unelected international bankers, and subsequently take power away from the citizens of each nation and their respective governmental representatives.

Does anyone really want international bankers to have such a vast amount of political power on top of the massive financial influence and sway they already hold in the halls of power?People want more say in their own lives, not having policy dictated to them by international banksters and bureaucrats.

Control over a nation’s money supply is, for all intents and purposes, the lifeblood of a state’s sovereignty – without this independence, the state only exists in name but is subservient to supranational powers whose interests lie outside of domestic and national political/economic concerns.

“Give me control of a nation’s money supply, and I care not who makes its laws,”

Although the Rothschild family now generally keep a very low public profile, they still have significant business operations across a wide spectrum of sectors. While you may not find any one particular Rothschild on the Forbes’ most rich list, the family is estimated to control $1 trillion dollars in assets across the globe, thus having a strong voice across the geopolitical spectrum that many perceive as a hidden hand manipulating events silently from behind a veil of secrecy and silence.

If so, please share this important information about the push for a one world currency and the agenda driving it!

Jay Syrmopoulos is a geopolitical analyst, freethinker, and ardent opponent of authoritarianism. He is currently a graduate student at the University of Denver pursuing a masters in Global Affairs and holds a BA in International Relations. Jay’s writing has been featured on both mainstream and independent media – and has been viewed tens of millions of times. You can follow him on Twitter @SirMetropolis and on Facebook at SirMetropolis. You can support his work at Patreon.