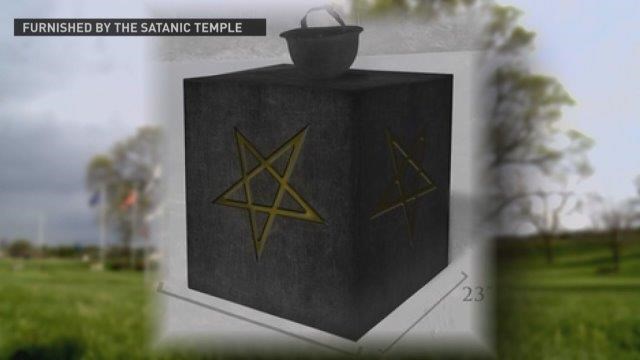 Belle Plaine, Minnesota, is a small city of 6,661 residents in 2010, about 45 miles southwest of Minneapolis.

In the name of “free speech,” the city government has conceded to satanists in their demand to erect a satanic monument in the city’s Veterans Memorial Park.

Liz Sawyer reports for the (Minnesota) Star Tribune that the people of Belle Plaine wanted to honor fallen U.S. veterans with a modest 2-foot steel war memorial called “Joe,” which features a cross.

In January 2017, fearing a lawsuit rooted in the constitutional separation of church and state, Belle Plaine city leaders ordered the cross to be removed.

But the decision to remove the cross proved deeply unpopular in the predominantly Christian city. For nearly a month, more than 100 flag-toting protesters occupied the park each day, often staking their own handmade crosses into the ground in defiance. Almost overnight, small wooden crosses popped up in business windows, on mailboxes and front lawns.

“The residents feel a sense of duty. Our veterans defended us and it’s our duty to defend them.”

That same night, city officials withdrew its cross-removal order with what they thought to be a solution — designating a small area in the park as a “free speech zone” that would accommodate 10 or fewer temporary memorials, as long as they honor veterans.

So the cross was reinstalled on the monument in April.

The city’s reinstatement of the monument’s cross is criticized by:

The Satanic Temple was first in line to test Belle Plaine’s free speech zone with an application to erect a satanic memorial allegedly to honor nonreligious service members — a black cube, inscribed with inverted pentagrams and crowned by an upturned helmet.

Founder Doug Mesner disingenuously claims that the Satanic Temple does not worship Satan, but only seeks equity for nonbelievers, and aims to “encourage reason and empathy, reject tyrannical authority and promote justice”.

City Administrator Mike Votca said the Satanic Temple memorial meets all of the town’s requirements and was swiftly approved: “Nothing is bulletproof, that’s for sure. But I think it’s as fair as it can be, which is really what we’re trying to achieve to eliminate the chance of lawsuits.”

Although Andy Parrish acknowledges that “Everyone understood this could happen” and that the satanic monument is “more annoying than it is offensive,” other Belle Plaine residents accuse groups like Satanic Temple and Freedom From Religion Foundation of preying on small towns that lack the resources to fight back.

Katie Novotny, a vocal cross proponent, said the majority of residents have accepted the idea of a monument that includes satanic symbols because “If you’re truly a Christian, how can you be offended by someone wanting to honor our veterans even though they don’t believe in the same things we believe in?”.

To sign a petition asking Belle Plaine to reverse their approval of the satanic monument, click here.