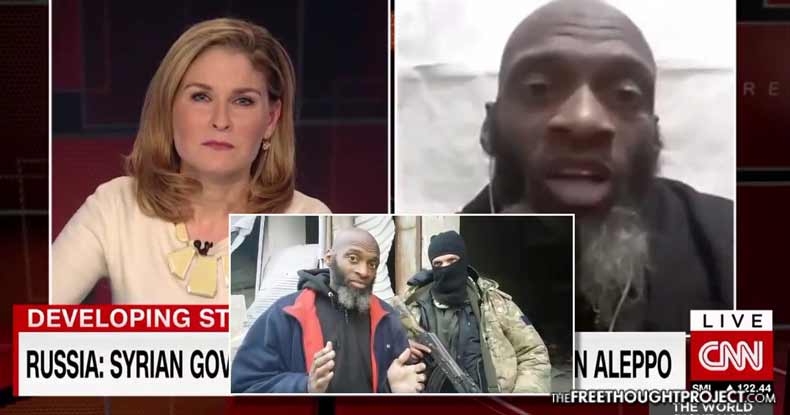 Bilal Abdul Kareem, of On the Ground News, was contracted by CNN to film a documentary called Undercover in Syria. Kareem is a self-proclaimed media activist living in rebel-held Syria and is considered “one of the top English-language propagandists for al-Qaeda’s Syrian affiliate Jabat al-Nusra,” according to an Alternet expose on Abdul Kareem and his connections to terrorism and CNN.

On June 16 Abdul Kareem went public with his intimate connection to CNN, and it’s documentary Undercover in Syria. He relayed his frustration with the network, having essentially whitewashed him out of his credit for a documentary he had a large hand in creating for CNN, which won a prestigious Peabody Award.

Abdul Kareem explained how CNN contracted him and his online news outlet, On the Ground News, to film the award-winning documentary.

“This Undercover in Syria, you can Google it — it won the prestigious Peabody Award, and it won the prestigious Overseas Press Club Award, which are basically the highest awards in journalism for international reporting. Now, [CNN] barely mentioned my name! I’m telling you, somehow CNN must have forgotten that I was the one that filmed it, I guess they forgot that.”

Contrary to Abdul Kareem’s statement that “CNN must have forgotten,” the reality is likely much closer to the fact that they intentionally minimized the credit Abdul Kareem received, due to his connections to terrorism – thus becoming a mere footnote in the Peabody Awards press release.

While the Peabody organization praised CNN host Clarissa Ward for “[going] undercover into northern Syria to document Russian influence on the fighting and to navigate the ongoing devastation,” Abdul Kareem was only given credit in small print, despite him being responsible for filming and providing CNN with the documentary footage of Syria.

CNN President Jeff Zucker delivered a keynote address at an April 17 ceremony where the network had won the Overseas Press Club Award for the Undercover in Syria documentary. In a press release, the network celebrated the access Ward had been granted to Islamist insurgent-held eastern Aleppo, but failed to credit Abdul Kareem for being the facilitator of these events, or even mention his name.

Abdul Kareem took to Facebook to dispute the allegation in a video response. “I am not, nor have I ever been, nor do I need to be a part of al-Qaeda. I don’t have any need for that,” he said.

According to a report from Alternet:

However, one of Abdul Kareem’s closest colleagues has also been accused of membership in Syria’s al-Qaeda franchise. Akif Razaq, an employee of Abdul Kareem’s online media group, On the Ground News, was recently stripped of British citizenship for his alleged involvement with al-Nusra. A notice presented by British authorities to Razaq’s family in Birmingham accused him of being “aligned with an al-Qaeda-aligned group” and declared that he “presents a risk to the national security of the United Kingdom.”

During Abdul Kareem’s Facebook video response to the Al Arabiya report, he was seated beside Razap. Razaq has also co-hosted On the Ground News segments with him.

While Abdul Kareem insisted there was “no proof” of his membership in the Salafi-jihadist organization, rebels inside Syria tell a different story…

Last December, AlterNet’s Grayzone Project exposed Bilal Abdul Kareem’s involvement with some of Syria’s most notorious jihadist figures and his open propagation of their sectarian ideology. Most prominent among the clerics granted a friendly audience by Abdul Kareem was Abdullah al-Muhaysini, the Saudi Arabian hate preacher and warlord praised by Abdul Kareem as “probably the most loved cleric in the Syrian territories today.”

Muhaysini is indeed popular among the Al Qaeda-allied rebels of Syria, and holds considerable sway over the entire region of Idlib. He has appeared in refugee camps to recruit child soldiers, raised millions of dollars for jihadist offensives and granted his blessing to the mass executions of captured Syrian soldiers on the grounds that the captives were kuffar, or blasphemers. The cleric’s goal, like that of ISIS, has been to establish an exclusively Sunni state purged of Shia, Druze and Christian citizens of Syria, and run according to a strict interpretation of Islamic law.

Others, such as Abdullah Abu Azzam, an activist affiliated with the rebel group Kataib Thawar al-Sham, using a pseudonym to protect his identity, due to threat of retaliation from al-Nusra, have come forward to proclaim that Abdul Kareem was not only a propagandist for al-Nusra, but well known as a member of the group.

In an interview with Alternet, done over Whatsapp, Abdullah Abu Azzam said that rebel fighters/jihadis “refer to Abdul Kareem as the “American mujahid” (mujahid is Arabic for jihadist).”

Abu Azzam said that Abdul Kareem had even made a series of YouTube videos for the official account of Jaish al-Fatah, the jihadi coalition led by al-Nusra — al-Qaeda’s affiliate army in Syria. He intimated that Abdul Kareem directly worked with the late public relations director for Jaish al-Fateh, Ammar Abu al-Majid, using the alias, Abu Osama.

Additionally, Abu Azzam claimed that he had knowledge of Abdul Kareem collaborating directly with Salafi cleric Abdul Razzaq al-Mahdi, one of the ideological leaders of the Islamist jihadis in Syria. In fact, Al-Mahdi, one of the most popular guests on Abdul Kareem’s videos, was a co-founder of Syrian al-Qaeda’s most recent rebranding as Hay’at Tahrir al-Sham. He later defected to the competing Salafist militia Ahrar al-Sham.

Alternet attempted to get answers from CNN regarding their hiring of a reputed terrorist by contacting the senior press manager for CNN International, along with CNN’s Middle East press officer and public relations coordinator — requesting comment on Abdul Kareem’s relationship to the network. “We asked for details about Abdul Kareem’s contractual obligations with CNN and whether the network felt his well-documented relationship with al-Qaeda compromised the reporting it carried out in Syria,” according to Alternet.