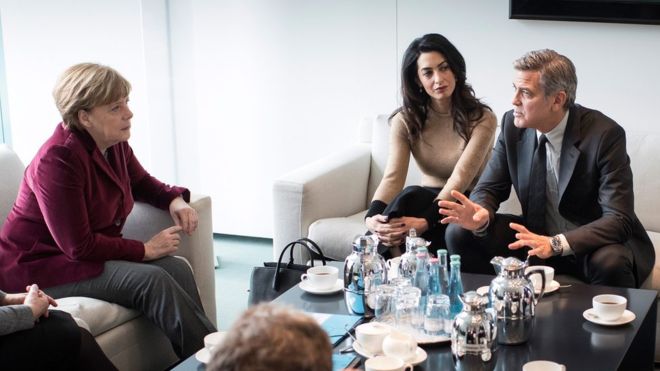 Back in February 2016 George Clooney and his wife Amal met with Angela Merkel “to discuss the ongoing crisis in the Middle East and the political reaction to it in Europe and elsewhere.”

After the meeting, George Clooney declared to the world that he and Amal fully support Merkel’s open-door policy towards “refugees,” telling reporters: “I absolutely agree with her”.

From Daily Mail: He’s made a home for his family in their stunning £20 million property in Sonning-On-Thames, Berkshire. Yet George Clooney is said to be considering relocating from the English countryside to Los Angeles as he fears for the safety of wife Amal and their newborn twins.

Following the birth of Ella and Alexander last month, the doting new dad, 56, has reportedly been increasingly worried about the level of security in their homes, Life&Style reports.

A source told the site that George had received threats in the past, whilst he was concerned that his wife’s work as an international human rights lawyer could make her a target. ‘He doesn’t feel like Amal and the twins are safe living in the English countryside,’ the insider explained. ‘As soon as Amal found out she was pregnant, he hired former Secret Service agents to assess all his properties and make recommendations for improvement.’

They claimed the star’s mansion in Studio City, California was the most secure, as they added: ‘He’s waited so long for this family, he’ll do whatever it takes to keep them safe.’

George wed Amal, 39, in 2014, and bought their sprawling £7.5 million home in the English countryside later that year. They have reportedly spent an additional £12.5 million on the sprawling estate, including building a nanny’s quarters.

As well as their English manor and Studio City pad, the pair also own two villas in Laglio, Italy and a holiday home in the Mexican beach location of Cabo.