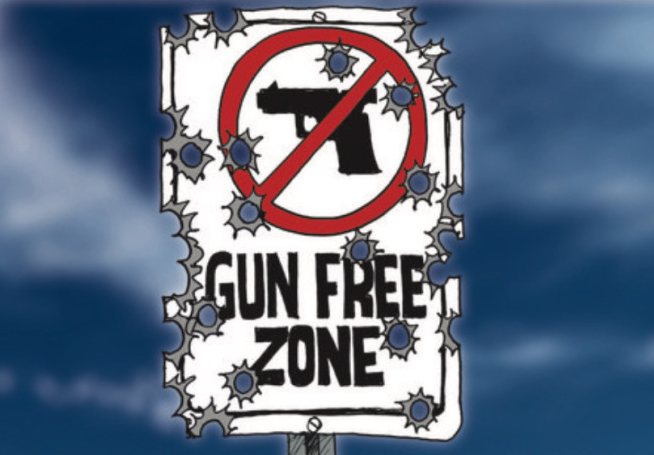 In Ohio, House Representatives have made strides in pushing back against the unconstitutional demands that make victims of us all called “Gun Free Zones.” They have passed a bill that would allows those with concealed carry permits to ignore “Gun Free Zones,” something that we should be doing anyway under the protections of the Second Amendment.

HB 233, referred to as the Decriminalization Effort for Ending Notorious Deaths Act, provides for those who are either in the military or those with concealed carry permits could not be found guilty over violating areas claimed as “Gun Free.”

The measure passed the Ohio House on Thursday with strong Republican support by a vote of 65-31.

The measure had strong Republican support.

What’s most amazing is the fact that it took a 46-page bill to simply say what needs to be said due to all the changes it will make in the current laws.

The proposal’s language protects CHL holders and military members found carrying a weapon in a gun-free zone from arrest and prohibits law enforcement from seizing their guns or ammunition. However, if asked to leave they must comply under threat of a fourth-degree misdemeanor criminal trespass charge, which can result in 30 days in jail and fines of up to $250.

The bill also removes daycares from the list of places that must post gun-free zone signs and modifies posting requirements for airports and government buildings, as well as decriminalizes carrying firearms into a liquor establishment.

The bill is receiving support from both local and national gun owner rights organizations.

However, there was opposition to the bill.

Maureen Washock with the highly questionable and sometimes immoral Moms Demand Action issued a statement saying, “The state representatives that voted for this bill should be ashamed of themselves. This legislation would undermine private property rights by allowing people to bring hidden, loaded handguns onto private property – even if the owner has posted a no-guns-allowed sign.”

Washock and her ilk never address the fact that since 2009, 92 percent of mass shootings have occurred in gun free zones. Additionally, she never responds to Gun owner rights advocate John Lott when he elaborates on the facts.

Since at least 1950, all but two public mass shootings in America have taken place where general citizens are banned from carrying guns. In Europe, there have been no exceptions. Every mass public shooting — and there have been plenty of mass shooting in Europe — has occurred in a gun-free zone. In addition, they have had three of the six worst K–12 school shootings, and Europe experienced by far the worst mass public shooting perpetrated by a single individual (Norway in 2011, which from the shooting alone left 67 people dead and 110 wounded).

Republicans control three of four seats in the Senate. If the bill passes there, it will go to Governor John Kasich’s desk to be signed into law.

While Kasich was endorsed by the NRA in 2014 when he ran for re-election and Kasich has said that he supports the Second Amendment, citizens from Ohio should keep their eyes on him as he has been known to say one thing and do another concerning Obamacare money.

Keep something in mind whether you are in Ohio or any other state, being in a gun free zone is probably the best place to be if you’re looking to get shot.