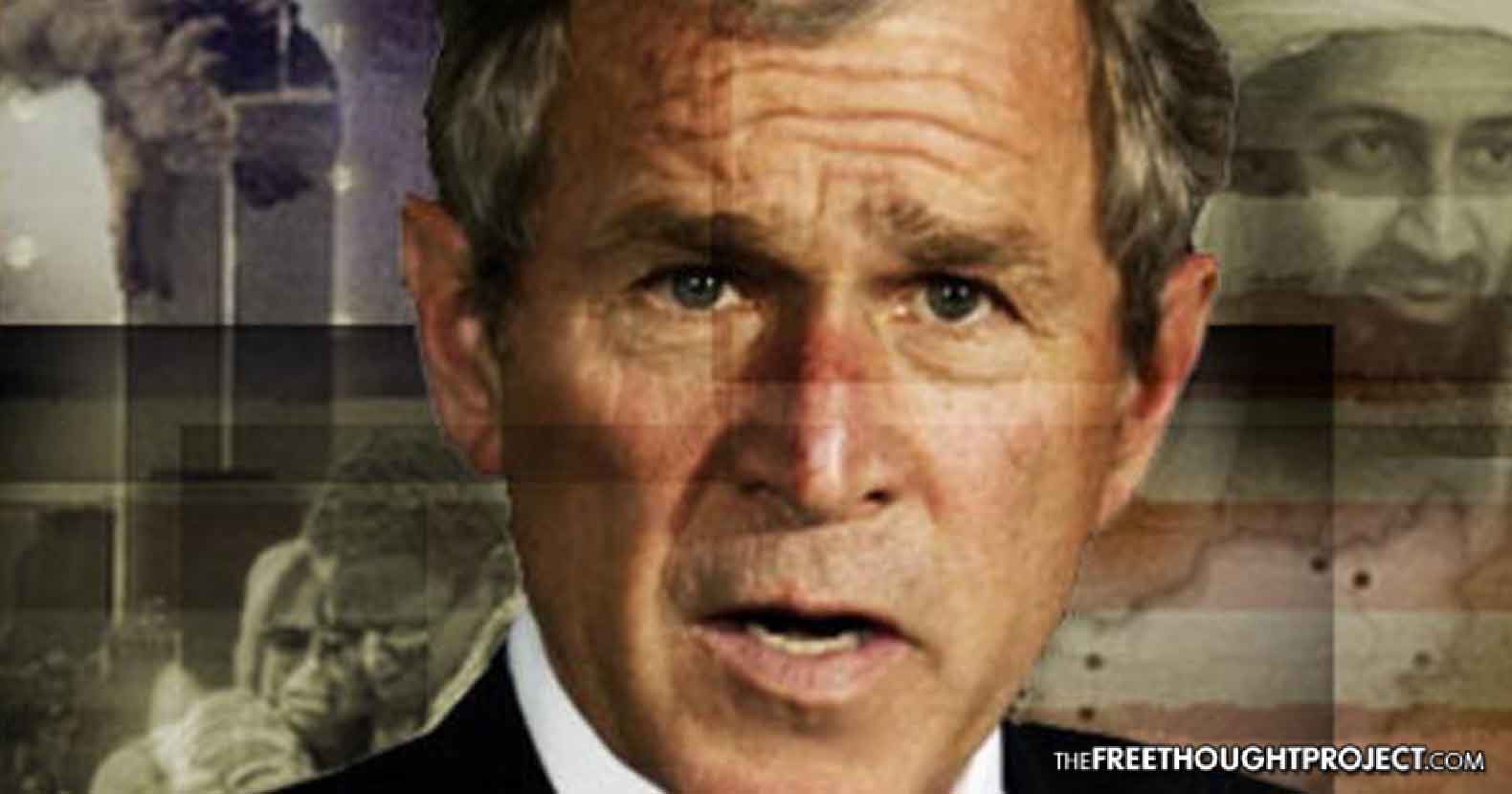 As George W. Bush bathed in extraordinarily high approval ratings following the Sept. 11, 2001 attacks, plans were already being drawn by his war-mongering cabal to use the event to invade Iraq. The few voices of dissent were drowned in an overwhelming, nauseating tide of nationalistic fervor, completely obscuring all sense of reason.

The administration rolled out a propaganda campaign to convince Americans of the need for pre-emptive war in Iraq, creating a rising sense of inevitability—up to the day of “shock and awe.”

By the time enough Americans realized they’d been duped—with the help of mainstream media from The New York Times to Fox News—it was too late. Cheney, Rumsfeld, Wolfowitz and other neocons hailing from the notorious Project for the New American Century (PNAC) had their agenda of military hegemony well underway.

Bush-friendly historians would have you believe the 43rd President made his decision to invade Iraq after careful deliberation and input from many voices. Those of us paying attention already knew this was a sham, but now we have even more proof that Iraq’s fate was sealed the moment Bush was “elected.”

According to Bush’s former ghostwriter, Mickey Herskowitz, Bush had dreams of invading Iraq two years before 9/11 when he was running for president, and wasn’t afraid to let them be known..

Herskowitz was interviewed by Russ Baker, who reported:

“Two years before the September 11 attacks, presidential candidate George W. Bush was already talking privately about the political benefits of attacking Iraq, according to his former ghost writer, who held many conversations with then-Texas Governor Bush in preparation for a planned autobiography.

“He was thinking about invading Iraq in 1999,” said author and journalist Mickey Herskowitz. “It was on his mind. He said to me: ‘One of the keys to being seen as a great leader is to be seen as a commander-in-chief.’ And he said, ‘My father had all this political capital built up when he drove the Iraqis out of Kuwait and he wasted it.’ He said, ‘If I have a chance to invade…if I had that much capital, I’m not going to waste it. I’m going to get everything passed that I want to get passed and I’m going to have a successful presidency.” Herskowitz said that Bush expressed frustration at a lifetime as an underachiever in the shadow of an accomplished father. In aggressive military action, he saw the opportunity to emerge from his father’s shadow. The moment, Herskowitz said, came in the wake of the September 11 attacks. “Suddenly, he’s at 91 percent in the polls, and he’d barely crawled out of the bunker.”

The people surrounding Bush had their own visions of grandiosity. They were reportedly in awe over the public adulation of Margaret Thatcher as she maintained British imperialism in the Western Hemisphere. Dick Cheney and the PNAC gang wanted roses thrown at their own feet for conquering the Middle East.

Invading easily defeatable countries was seen as an avenue to success as an American leader, which, as Baker notes, was the modus operandi in the Reagan White House, where Cheney was deeply involved.

“Start a small war. Pick a country where there is justification you can jump on, go ahead and invade.”

Making war is, of course, a common theme in almost every administration since World War 2 birthed the military-industrial complex.

Bush couldn’t have done it without the help of Dick Cheney, often likened to Darth Vader for the callousness with which he discusses US-wrought death and destruction. Cheney, who cut his teeth in the Reagan era helping to invade sovereign Latin American countries, brought a horde of neocons and military-industrial complex goons to the Bush administration, many from PNAC.

It just so happens that PNAC sent a letter in 1998 to President Bill Clinton, advocating for regime change in Iraq and urging Clinton to take a more hardline stance. The Cheneys always had close ties to the Bush family, and neocons found their man in George Jr.

Bush’s statements in 1999 to Herskowitz weren’t the only indicator of Bush’s obsession about invading Iraq and removing Saddam. That same year, during a presidential primary, Bush said of Saddam’s purported weapons stash, “I’d take ’em out, take out the weapons of mass destruction-I’m surprised he’s still there.”

Just after the 9/11 attacks. PNAC sent a letter to Bush calling for a “a determined effort to remove Saddam Hussein from power in Iraq.” Citing the newly crafted ‘war on terror’ justification—giving the president unheard of powers to carry out unilateral military action around the globe and round up “enemy combatants”—PNAC declared that not invading Iraq would be “an early and perhaps decisive surrender in the war on international terrorism.”

To the already informed, it comes as no surprise that Bush always intended to invade Iraq, and 9/11 provided the perfect excuse. Of course, in the American political-corporate establishment, there is no chance Bush will actually be prosecuted for the massive campaign of lies and deception used to lead America into the full-scale invasion of a sovereign Middle Easter country.

The more important point to remember is that the U.S. can easily be led into wars of aggression–potentially far more dangerous than Iraq–by elected presidents and lawmakers completely willing to deceive the public by capitalizing on fear.

Sowing division among the populace is a primary step to the conquering of public perception. Never underestimate the willingness of desperate “leaders” to provoke or contrive an attack in order to overwhelm the movement of peace and liberty.