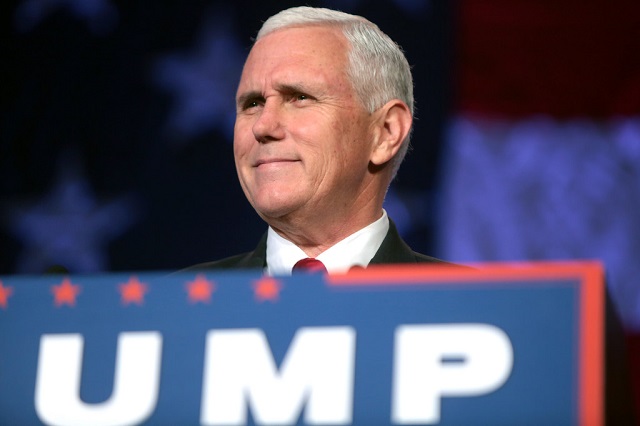 Ever notice how Vice President Mike Pence is never implicated in any of President Donald Trump’s scandals and always comes out looking pure as the driven snow?

With the leaking of Don Jr.’s emails to the New York Times, which they sourced to “three advisers to the White House briefed on the meeting and two others with knowledge of it,” people are finally starting to ask questions about whether or not this establishment Republican cold warrior is leaking to take Trump down so he can become President.

Julian Assange tweeted this article from Business Insider out on Tuesday:

Why does it look like someone close to White House is trying to destroy @DonaldJTrumpJr? https://t.co/wC6N6sxD70

From Business Insider, “Why does it look like somebody close to the White House is trying to destroy Don Jr.?”:

The call is coming from inside the White House — or near it, at least.

A remarkable fact about The New York Times’ Sunday report of the meeting of a Kremlin-linked lawyer and Donald Trump Jr., Jared Kushner, and Paul Manafort is that the story was sourced to “three advisers to the White House briefed on the meeting and two others with knowledge of it.”

Subsequently, The Times obtained Trump Jr.’s email exchange with the publicist Rob Goldstone to set up the meeting. That is the exchange during which Goldstone promised damaging information about Hillary Clinton obtained as “part of Russia and its government’s support for Mr. Trump.” And Trump Jr. responded not by saying, “What Russian effort to support my dad?” but rather, “I love it especially later in the summer.”

The Times cannot have gotten the emails from Goldstone. After all, The Times knew that Trump Jr. had “forwarded the entire email chain to Mr. Kushner’s company work email, and to Mr. Manafort at his Trump campaign email.” Goldstone wasn’t included on that forward, as we can see from Trump Jr.’s publication of the email chain on Twitter after The Times called him for comment about it.

So five people in or around the White House have been spilling highly incriminating information to The Times about Trump Jr.’s meeting, and an email chain that only Kushner, Manafort, and Trump Jr. possessed also made its way to The Times somehow.

He notes this latest scandal came after Trump’s over 2 hour meeting with President Putin.

Pence is an establishment cold warrior who hates Russia and does not want to see relations normalized.

A theory I saw some people floating on Sunday was that Kushner was putting information out to throw his brother-in-law under the bus, getting everyone to think of this as “Don Jr.’s meeting” rather than “Jared’s meeting.” And that was maybe plausible before we learned that Trump Jr. had been told the meeting would be part of a Russian operation to support his father, and before we learned that Trump Jr. forwarded Kushner and Manafort an email saying as much.

Disclosure of this email exchange is a disaster for both Kushner and Trump Jr. It’s hard to imagine why Kushner would have seen any advantage in getting it out.

Of course, the other person who initially had the email chain was Manafort. I don’t know what Manafort’s interests are right now. Manafort doesn’t work at the White House, but given this Politico story from May, it does seem that one might be able to describe him as an adviser to the White House.

It also occurs to me that when candidate Trump was itching to put Chris Christie on the ticket and his offspring were pushing him, for some reason, toward Newt Gingrich, Manafort was the prime mover behind the Mike Pence choice. One report alleged Manafort faked a mechanical problem with Trump’s plane so Trump would be forced to spend a night in Indianapolis, where Pence could pitch himself for the job. The person in the West Wing most plausibly a winner in this episode is Pence, who would stand to become president if Trump were forced from office. Pence, who has an unusually vigorous fund-raising operation for a first-term vice president, has been putting out ice-cold statements about this story.

“The vice president is working hard to advance the president’s agenda every day,” Marc Lotter, his spokesman, said on Tuesday. “He was not aware of the meeting. He is also not focused on stories about the campaign — especially those that pertain to the time before he joined the campaign.”

Pence appears to have made similar leaks back in May while the Flynn scandal was ongoing:

Pence has been kept in the dark about former National Security Adviser Mike Flynn’s alleged wrongdoing, according to a source close to the administration, who cited a potential “pattern” of not informing the vice president and calling it “malpractice or intentional, and either are unacceptable.”

[…]”You never saw him promoting Flynn,” the source asserted.

From CNN, “Pence is a loyal soldier, but news cycle is wearing on him”:

“We certainly knew we needed to be prepared for the unconventional,” but, the source adds, “not to this extent.”

[…]On whether Pence would make any explanatory statements about the meeting between Trump and Russian Ambassador to the US Sergey Kislyak: “I certainly hope not.”

Axios reported Wednesday: “Most elected Republicans in town would privately prefer a President Pence. When push comes to shove, they may not protect Trump. Indeed, their natural impulse will be to throw him overboard.”