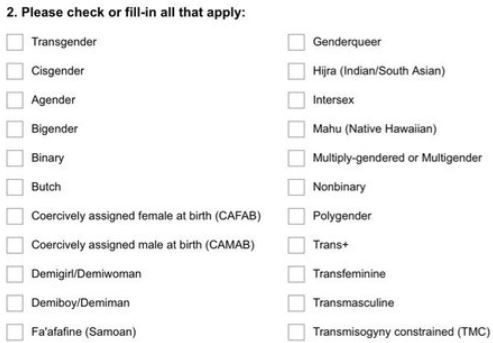 It was their guru Karl Marx who invented class identity politics (called “class consciousness”). Since then, the Left have been “discovering” and politicizing new identities at an increasingly dizzying speed — from race (black, brown) to ethnicity (hyphenated Americans) to religion (Muslims, atheists and the sacrosanct, beyond-criticism Jews) to sexual orientation (LGBT) to gender (feminism) to the latest, trans gender. All of which serves the singular purpose of dividing Americans into separate groups of perpetually-aggrieved victims.

If you think the biologically-fictitious transgender identity is bad, you ain’t seen nothin’ yet.

VIDA’s bizarre list of genders include “agender” (no gender), “bigender” (both male and female), “intersex” (neither male nor female?), “multigender”, “polygender”, and “transmisogyny constrained” (whatever that is).

Truly, liberalism is a mental disorder of a magnitude hitherto underestimated in its pathology and severity.