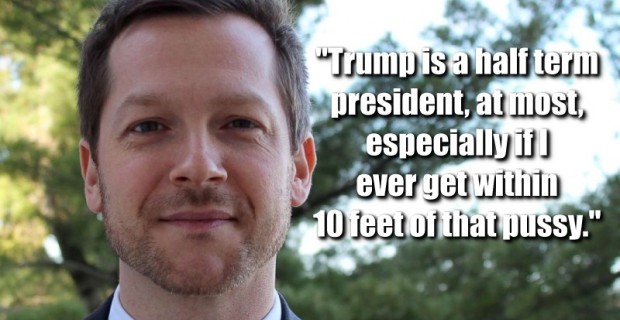 The Secret Service is looking into what some are calling a death threat made by Democratic lawmaker Scott Hamann, who vowed to make Trump a “half term president” if he ever got “within 10 feet” of him.

Hamann posted a crazed Facebook rant in which he declared, “Trump is a half term president, at most, especially if I ever get within 10 feet of that pussy.”

Hamann, who represents a district in South Portland, went on to accuse Trump of being “anti-American,” and an “admitted rapist” who was “installed by the Russians.”

Dave Watson, the resident agent in charge of the U.S. Secret Service field office in Portland, told the Press Herald that his office was receiving calls from the public about Hamann’s Facebook post.

“We are looking into it, but as to whether an investigation has been opened, I can’t comment on that,” Watson said. “But we have been getting messages.”

After a huge backlash, Hamann offered half-hearted apology, stating, “I regret my impulsive decision to post something aggressively sarcastic and inappropriate in a Facebook exchange with a childhood friend.”

“Words cannot even begin to describe the level of revulsion I feel after reading Rep. Scott Hamann’s recent tirade that has come to light,” Kouzounas said in a statement. “Perhaps the most alarming aspect of this tirade is an implied death threat against our president.”

However, Gideon’s spokeswoman said the Democratic representative “was on vacation and unavailable for comment”.

Many see Hamann’s threat as yet another example of how the left is inciting violence against Donald Trump and Republicans in general.

Last month, 66-year-old James T. Hodgkinson targeted Republican lawmakers in an attempted massacre after vowing on Facebook that he would “destroy” Trump and saw him as a “traitor”.

Despite innumerable violent attacks on Trump supporters across the country, the mainstream media has attempted to maintain the narrative that Trump’s rhetoric is responsible for the hatred, with some even going so far as to blame Hodgkinson’s attempted massacre on Trump, despite the fact that the culprit was a Bernie-supporting leftist.