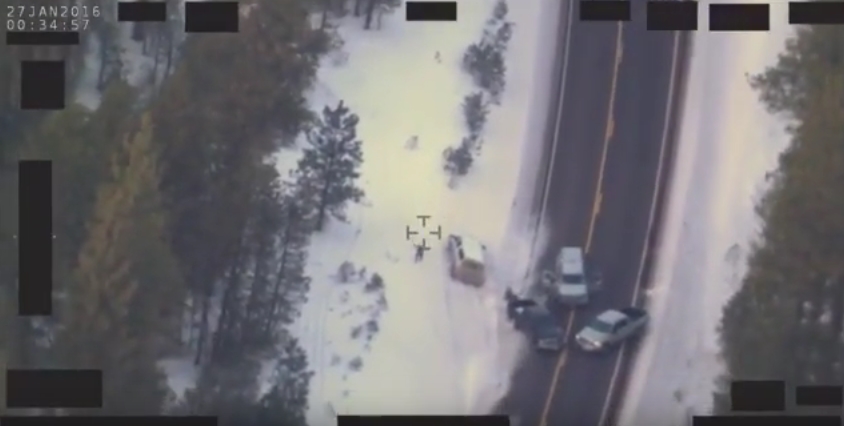 A sheriff has now come forward to back the claims of protesters who were at the Malheur Wildlife Refuge in Oregon in 2015-16, following FBI agent W. Joseph Astarita’s not guilty plea. Those claims were that the FBI misbehaved by engaging in “possible criminal conduct.”

At the end of June, we reported on Astarita’s indictment and subsequent not guilty plea, where he was not even held on bail.

At that time, Deschutes County Sheriff Shane Nelson blasted the FBI Hostage Rescue Team that Astarita was a part of that nearly killed LaVoy Finicum when he exited his truck on January 26, 2016.

Deschutes County Sheriff Shane Nelson had harsh criticism Wednesday for multiple members of the FBI Hostage Rescue Team, saying that their actions during the 41-day siege with supporters of the anti-federal Bundy family had “damaged the integrity of the entire law enforcement profession, which makes me both disappointed and angry.”

His comments came during a press conference after FBI agent W. Joseph Astarita pleaded not guilty to three counts of making false statements and two counts of obstruction of justice in federal court in Portland.

But the sheriff didn’t stop with Mr. Astarita.

He said that he told Justice Department and FBI officials, including now-acting Director Andrew McCabe, over a year ago about “possible criminal conduct by some involved FBI HRT (Hostage Rescue Team) agents.”

“I was disappointed when I recently heard FBI HRT agents associated with this case were not placed on administrative leave after the briefing by our investigators to FBI administration,” said Sheriff Nelson. “Today’s indictment will ensure that the defendant and hopefully any other culpable FBI HRT members will be held accountable through the justice process.”

The US Attorney’s Office in Oregon gave a statement regarding Astarita’s obstruction of justice.

“Specifically, Astarita falsely stated he had not fired his weapon during the attempted arrest of Mr. Finicum when he knew he had, in fact, fired his weapon,” the statement read. “Astarita also knowingly engaged in misleading conduct toward Oregon State Police officers by failing to disclose that he had fired two rounds during the attempted arrest.”

One thing that I did find peculiar, though not surprising, was that U.S. Attorney Billy J. Williams claimed that the charges against Astarita “do not in any way call into question the findings of the major incident team’s investigation of OSP’s use of deadly force. OSP’s actions were justified and necessary in protecting officer safety.”

I disagree. Since Finicum was no threat when he exited the vehicle and was shot at not once, but twice, does anyone not think that he was screaming “Just shoot me” because he wanted suicide by cop? I don’t think so. I think that Finicum really thought they were going to murder him right then and there, and eventually they did kill him.

The fact that Astarita not only attempted to murder Finicum, but then tried to cover up the fact that he shot twice at him and he was released without bail is hypocritical of the state of Oregon since they held the protesters without bail who never took a shot at anyone.

At the time of the shooting, even the FBI didn’t give the whole truth at a press conference, according to the Bundy’s attorney.

Friends and family were angry about that.

Finicum family friend Kelli Stewart indicated, and I agree with her, that Astarita should have been charged with several crimes besides the obstruction charge, including conspiracy and attempted murder.

“He and the other FBI agents literally conspired to impede a federal investigation,” said Ms. Stewart in a Facebook video. “They hid the fact that shots were fired, and here we waited 17 months just for a simple indictment to come down. So while we’re happy that something is happening, it feels a little like the people are being simply pacified.”

“If I fired a weapon at somebody else and lied about it and hid the evidence as he did, just even as a civilian, I’d be facing a lot of charges, and I’d be in handcuffs,” Ms. Stewart added. “Justice has not been served today.”

Finicum’s widow has filed a wrongful death lawsuit even though Oregon has ruled the shooting of her husband justified.

“I believe there’s more that needs to be done; there were other officers involved in the coverup,” said Jeanette Finicum.

As for Sheriff Nelson, he praised US Inspector General Michael Horowitz and his team for “tirelessly searching for the facts in this case.”

“His office will also conduct a thorough administrative review to identify any areas of improvement that will help eliminate any mistakes made by the FBI in the future and increase transparency for federal law enforcement,” said Sheriff Nelson.

There is just no way that Astarita is the only one who should be charged here. Multiple agents were with him and knew about the shooting. No one talked. Several were investigated. Where are the other indictments?

For more on the people who stood at the Malheur Wildlife Refuge for freedom and the rule of law, take a look at this short video and then take the time to view the rest of the videos in the series.