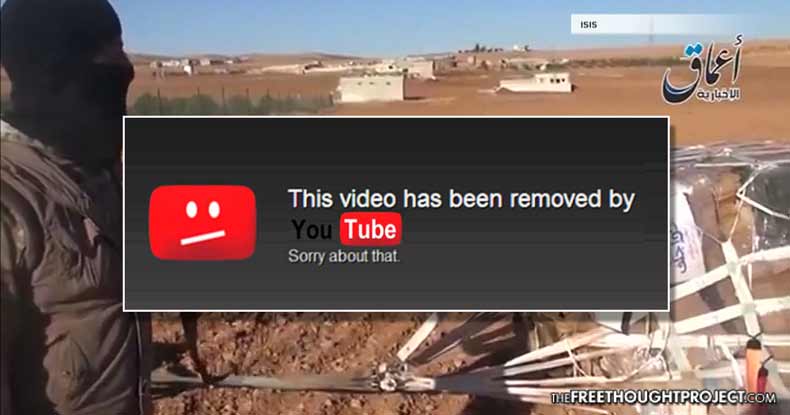 Another YouTube video has been censored on the grounds that it violated the platform’s Community Guidelines—but the removal of this video does not protect viewers from nudity or crude language. Instead, it ‘protects’ viewers from the reality of United States foreign policy.

Alternative geopolitical analyst Mimi Al Laham, who goes by the name “Partisan Girl,” revealed on Twitter that one of her YouTube videos was flagged and removed upon review. “It documented US military airdrops falling into ISIS hands,” She wrote. “Truth is graphic content.”

The notice from YouTube claimed the video was removed because it violated the platform’s Community Guidelines. In addition to the video’s removal, Partisan Girl also received a “strike” or penalty on her account—a YouTube user can receive up to three “strikes.”

The title of the video was “US airdrops weapons into #ISIS hands – #Syria Ayn Al Arab,” and the reason YouTube gave for removing it was that it contained “violent or graphic content,” that was posted in “a shocking, sensational, or disrespectful manner.”

“If a video contains violent or graphic content that appears to be posting in a shocking, sensational, or disrespectful manner, it’s less likely to be allowed on YouTube. We also don’t allow content that’s intended to incite violence or encourage dangerous activities. We review content on a case by case basis and will only make limited exceptions for appropriate educational, documentary, artistic, and scientific contexts, where the purpose of posting is clear.”

The thing is, while a video of the U.S. military dropping weapons right into the hands of ISIS may be shocking to some, it is hardly sensational. In October 2014, the Pentagon admitted that the U.S. airdropped weapons to ISIS that were reportedly intended for Kurdish fighters in Kobani, Syria, and insisted that “the wind” was to blame.

However, this is not the first time the United States—whether intentionally of negligently—has been caught helping the group it claims to be at war with. The most recent case came to light in June when a 2016 audit from the Department of Defense revealed that it could not account for $1 Billion in weapons and equipment.

Patrick Wilcken, Amnesty International’s arms control and human rights researcher, noted that the latest audit is part of a troubling pattern that has been ongoing for years.

“This audit provides a worrying insight into the US Army’s flawed—and potentially dangerous—system for controlling millions of dollars’ worth of arms transfers to a hugely volatile region,” Wilcken said. “It makes for especially sobering reading given the long history of leakage of US arms to multiple armed groups committing atrocities in Iraq, including the armed group calling itself the Islamic State.”

In fact, the U.S. has given ISIS such a surplus of weapons and equipment, that some of those weapons are now being sold on Facebook by Islamic State militants. A report from 2016 revealed that “Jihadis in Syria are using Facebook as a marketplace to buy, sell and barter a wide variety of American-made weapons and munitions ranging from rocket launchers to machine guns.”

In addition to support from Facebook, ISIS has also received ample support from YouTube. The platform has helped the militants by hosting their recruiting videos, while also helping the group by removing videos that reveal who is funding it, such as the one from Partisan Girl.

However, the subject of ISIS is not the only area where YouTube has questionable judgment. As The Free Thought Project has reported, YouTube also hosts thousands of videos with millions of views that are disguised as child-friendly content, while they actually promote violence, sex and pedophilia.