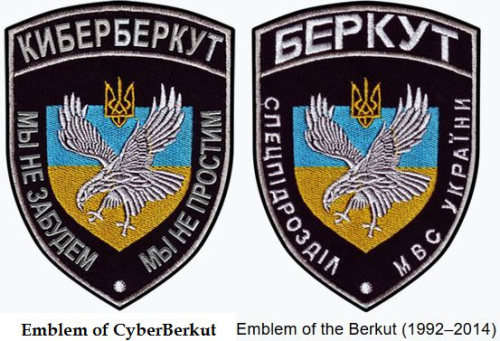 CyberBerkut, founded around 2014, is a Ukrainian nationalist and pro-Russian group of anonymous hacktivists who, as described by Wikipedia, became known for a series of denial-of-service (DDoS) attacks on the pro-West (NATO and the U.S.) Ukrainian government, and on western and Ukrainian corporate websites.

Its name, CyberBerkut or Berkut online, is a reference to Berkut — a special police within Ukraine’s Ministry of Internal Affairs. After the 2014 Ukrainian revolution — in which the Obama State Department was covertly involved — the new pro-West Ukrainian government dissolved Berkut, blaming the special police for most of the nearly 100 civilian deaths. Berkut’s unit in Crimea, which broke away from Ukraine, defected to the Russian Ministry of Internal Affairs and kept its old name.

Indeed, CyberBerkut’s emblem is almost identical to that of Berkut:

In response to CyberBerkut’s hacktivism, the group’s Facebook page is repeatedly blocked, and its website repeatedly disrupted. Indeed, when I tried to assess CyberBerkut’s website this morning, I got the message:

“The site is under attack. Service is temporarily unavailable.”

Yesterday, WikiLeaks sent out a tweet informing us that CyberBerkut just published a batch of emails between Ukraine and Hillary Clinton/Clinton Foundation, with a link to the CyberBerkut webpage.

When you go on the CyberBerkut page, the most intriguing thing comes at the end — an email on January 8, 2017, i.e., after Hillary Clinton had lost the presidential election to Donald Trump, showing the Democrats plotting to manufacture the phony story that Russia had hacked the election.

CyberBerkut claims they were given the email by a “whistleblower” and that the names of the email sender and receiver are blacked out to protect the identity of the whistleblower.

We all agree there is a need to provide technical details on Russian hacking.
____ urges you and _____ to bring up again the issue with _____. It’s quite important, especially as we approach the hearings. If there are no technical details we have to find some by all means. I am sure his guys can do it. We are short of time.

Sent from my iPhone

“Our whistleblowers gave us information that Russia was going to face great provocation. The Americans intend to manufacture false evidence of the Russian security services’ involvement in cyber attacks during the U.S. presidential elections 2016.

We cover the names of the provocation facilitators in order not to expose our sources. It is worth saying, a famous American politician and major financier took part in the plot.”

Is the “famous American politician” Hillary Clinton, and the “major financier” George Soros?