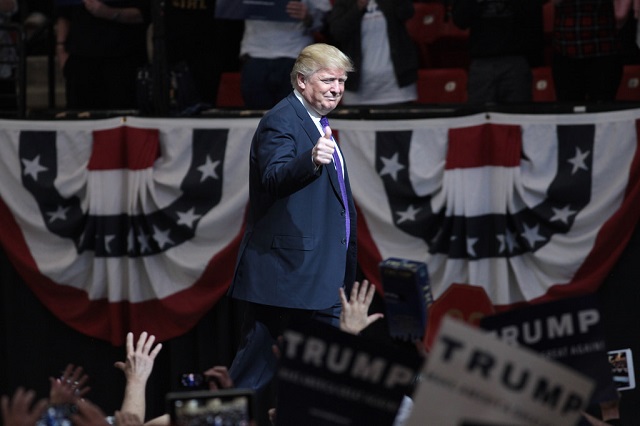 President Trump is reportedly working with aides Stephen Miller, Steve Bannon and GOP Senators Tom Cotton and David Perdue to draw up a plan which would cut the number of legal immigrants allowed into the US by half.

Donald Trump and his aides are quietly working with two conservative senators to dramatically scale back legal immigration — a move that would mark a fulfillment of one of the president’s biggest campaign promises.

Trump plans to get behind a bill being introduced later this summer by GOP Sens. Tom Cotton of Arkansas and David Perdue of Georgia that, if signed into law, would, by 2027, slash in half the number of legal immigrants entering the country each year, according to four people familiar with the conversations. Currently, about 1 million legal immigrants enter the country annually; that number would fall to 500,000 over the next decade.

The senators have been working closely with Stephen Miller, a senior White House official known for his hawkish stance on immigration. The issue is also a central priority for Steve Bannon, the president’s chief strategist, who has several promises to limit immigration scribbled on the walls of his office.

I’d prefer repealing the 1965 immigration act, but this is a good start if it’s combined with telling illegals “you have to go back.” From LifeZette, “Immigration Shocker: Trump Administration May Bail on DACA:

Facing the threat of a lawsuit from Texas and nine other states, the Trump administration indicated Wednesday that it may decline to defend DACA in court, a move that would likely result in the end of the program that granted amnesty to illegal immigrants brought to the U.S. when they were children.

Homeland Security Secretary John Kelly went up to Capitol Hill on Wednesday afternoon to address members of the Congressional Hispanic Caucus, telling them, according to reports, that although he personally supports the Deferred Action for Childhood Arrivals (DACA) program, he can’t promise that the administration will defend it if challenged.

Several members of Congress pressured Kelly in the meeting, and he responded by suggesting they work to pass a law.

Sen. Bob Menendez of New Jersey, a Cuban-American and a Democrat, told reporters after the meeting: “It’s not a pretty picture.”

At issue is the 2012 memorandum signed by President Barack Obama that allowed people brought to the U.S. illegally as children to apply for two-year work permits, and to be granted a reprieve from deportation. Anyone under 30 years of age who came to the U.S. illegally before the age of 16 and before June of 2007 is eligible.

The program was referred to by critics as a blanket amnesty, as it has effectively legalized more than 750,000 people who have been granted DACA status. These people have been able to live and work in the U.S. as though they were legal residents.

The Pew Research Center has estimated that another one million people already in the U.S. may qualify for DACA.

The policy led to a surge at the border in 2014 and 2015, with many families and unaccompanied minors flowing into Texas, Arizona, and New Mexico.

“Logically, it really was the signal that if you get your kids here, we’ll let you stay,” Ira Mehlman of the Federation for American Immigration Reform told LifeZette.

Just as a reminder: mass immigration is entirely about “fundamentally transforming” America.