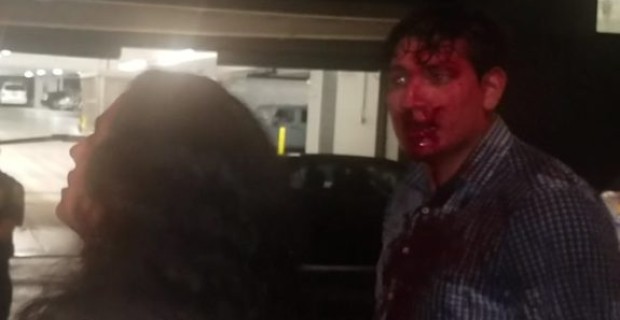 “If this is important, how come we didn’t see it on CNN?” asked ABC rep

Numerous different news networks in New York deliberately refused to report on a man who was attacked and had his face slashed open for supporting President Trump, revealing the deep anti-Trump bias that pervades the mainstream media.

Val was dancing when his red MAGA hat fell off. A woman later identified as Emma Rodriguez stepped on the hat and told Val she hated him and his hat.

When Val pushed Rodriguez away to retrieve the hat, Rodriguez’s boyfriend, Leonardo Heinert, struck Val in the face with a beer bottle before then smashing him with the bottle in the back of the head.

Val, Rodriguez and Heinert were all arrested and subsequently released before Val received 15 stitches to close up the huge gash on his face.

The incident was clearly worthy of news coverage given that the man was deliberately attacked for being a Trump supporter.

However, when Rebel TV reporter Laura Loomer attempted to get press attention for the story, she was completely shunned.

Loomer first contacted ABC News, only to be told that, “this isn’t an important story and that if it was they would have heard about it from the NYPD and the hospital since they have contacts there.”

The ABC representative went on to ask, “If this was important and actually happened how come we didn’t see it on CNN?” – a line that reveals how much of the mainstream media is an echo chamber that just regurgitates whatever the big networks run with.

Loomer also called Fox 5 in an attempt to have them cover the story, only to be asked, “Why is this newsworthy?”

Even the usually pro-Trump New York Post rejected the story, telling Loomer, “We have too much going on. We are going to pass.”

The total inability of reporters and news outlets to see a story in a politically motivated violent attack on a Trump supporter underscores the bias that runs rampant throughout these organizations.

If a Trump supporter had slashed a leftist for wearing the wrong hat, the story would receive nationwide coverage.

The Daily Caller has compiled a list of violent attacks on Trump supporters. Despite there clearly being a sustained violent hate crime wave targeting Trump supporters since well before the election, culminating in anti-Trump gunman James T. Hodgkinson attempting to massacre Republican lawmakers, the media has buried this narrative.