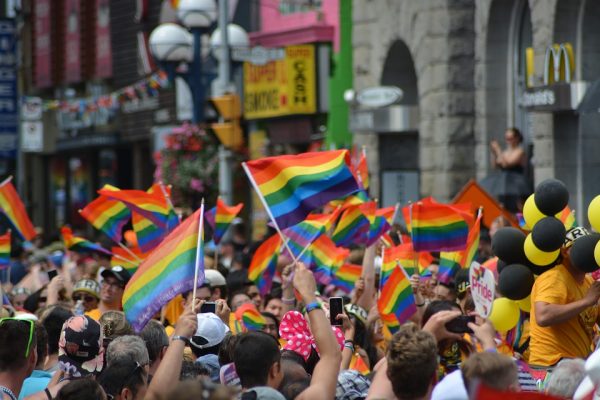 It it okay for naked men to flaunt their completely exposed bodies in front of young children as they march down the street during pride parades? Summer is a time when all sorts of groups hold parades all over America, and even if we disagree with what certain groups have to say they still have a First Amendment right to say it. But nowhere in the U.S. Constitution is there a right to public nudity. Every year completely naked and nearly naked men participate in these parades in cities all over America, and we never hear of anyone getting arrested.

For example, during New York City’s recent annual pride parade many people marched without any clothes on at all…

Hundreds of thousands of people watched marchers in colorful fancy dress – and in some cases no clothes at all – at the Big Apple’s NYC Pride Parade.

Can we just take our clothes off and march down the street nude in New York City any time we want now?

If not, why weren’t people getting arrested?

Of course out on the west coast things are even worse. During the recent parade in San Francisco, an entire organization known as “the Body Freedom Lovers” proudly marched completely naked…

On this 50th anniversary of the Summer of Love we are proud to march nude in the Gay Pride Parade as the Body Freedom Lovers. We proudly celebrate our bodies as well as the spirit of the 60s that brought us profound spiritual awakenings as well as sexual liberation and body freedom. Just as the gay/bisexual/transgender folks fight for their freedom of choice to do what they please with their own bodies so do we join the same fight to do what we please with our bodies. Not only do we have the right to make love to our lovers in any way we want, we also have the right to dress or undress the way we want. We have no reason to be ashamed of our God-given bodies, just as we have no reason to be ashamed of our God-given desires. We all have the right to life, liberty and the pursuit of happiness. That’s why we demand that the government keep its laws off our bodies! We demand the repeal of the nudity ban that criminalizes the human body in its most natural form. The nudity ban is not only unconstitutional – for it violates our freedom of expression, not only does it go against the Declaration of Independence – for it deprives us of liberty in our pursuit of happiness. The nudity ban goes against the most basic common sense and against nature, our very own human nature.

If they want to march around in their own homes completely naked that is one thing. But at these events there are lots and lots of children. In fact, one mother that was interviewed said that she had been bringing her little daughter to the parade since she was a baby…

“We have been bringing our daughter (now 7) annually since she was a baby,” shares S.F. mom Beth Winegarner. “Yes, there is some nudity and leather but there’s little to no overt sexual stuff as there is at, say, Folsom Street Fair. Kids in general aren’t at all fazed by seeing nudity — after all they like to run around and play with as little on as possible, too.”

Since there is “little to no overt sexual stuff” that somehow makes it okay?

The frightening thing is that this is becoming normalized. Up in Canada, the public is actually given tips on how to prepare their children for what they will see during these events. The following comes from LifeSiteNews…

Last year, Radio Canada offered tips on attending “pride” events with small children. The first bit of guidance is chilling: “Be open-minded. Your kids will probably see boobs and penises. There will be bodies of all shapes, sizes and in all states of undress.”

The sage advice continues, “For parents like Ian Duncan, dad to 3-year-old Carson, this is all part of the appeal. ‘We’re not body shamers,’ he says. ‘It all feeds into my son’s emotional intelligence and sexual development. And it’s never too early to think about that.’”

So why not let everyone walk around completely naked all the time?

Of course the truth is that this is harmful for children, and they instinctively know it. Just consider how one young girl responded to seeing naked men at one of the annual pride parades in Toronto…

Naked men marching in Toronto’s Pride parade, showcasing what supporters cheer on as the advancement of “gay rights” and “sexual liberation.” The naked men march past men, women, and yes even children. Everyone is encouraged to celebrate “diversity.”

Oh, but what’s this? A young girl with blond hair in a turquoise teeshirt knows that something is wrong.

She does the most natural thing: She hides her face in her hand to protect herself. She doesn’t want to see the genitals of naked men.

The reason why she covered her eyes was because she knew that she was seeing something that she shouldn’t be seeing.

There is a reason why public nudity has always been against the law, and there is absolutely no reason why anyone needs to march down the street fully undressed.

But this is where our society is going, and that has extremely frightening implications for our future.