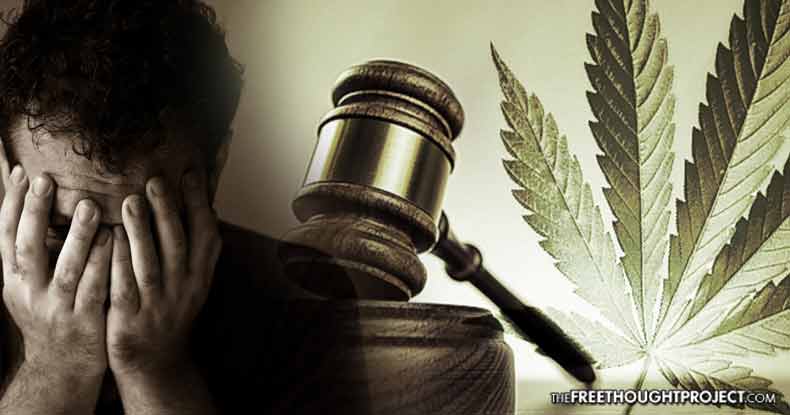 As a father suffering from hepatitis C, Michael Brooks exhausted every pharmaceutical option available to treat the disease and extend his time on Earth with loved ones, before ultimately turning to medical cannabis — a move which, indeed, changed everything.

“It saved my life,” Brooks declared to the State of Tennessee of the THC-intensive oil responsible for vastly improved health, in a hearing discussed at a later point in this article.

As definitive as his statement seemed, not everything came up roses for the devoted dad — despite medical cannabis having facilitated the best health of Brooks’ more than four decades alive.

In fact, two years after his impassioned plea to his state of residence, Brooks languishes on the brink of death, gaunt, pale — and without his kids to treasure the precious remaining last moments of his existence — because government.

Twenty-five years after Michael Brooks contracted hepatitis C — a disease affecting the liver, often without any noticeable symptoms, which can cause serious damage, cirrhosis, cancer, and even death — and, now married, the infection began wreaking havoc with his health.

A multitude of pharmaceuticals having proffered no benefit — instead, adding adverse effects — Brooks and his wife, whom High Times’ Russ Belville did not name and who also suffers from hep C, turned frantically to medical cannabis oil, in the haven known for an explosion in the population of medical refugees: Colorado.

And it worked. Belville explains,

“Within a few heavy treatments of the oil, his viral load was undetectable. Not only had he beaten back hepatitis C, he was in the best health of his life. He had never known how ill he had always been, because he had always been ill. For the first time, he told me, he felt healthy — he felt like what most people take for granted.

“Then, from the highest high of relief and gratitude for his discovery of medical marijuana, he was plunged within a few months into the lowest depths of depression and despair.

“Michael couldn’t stay in Colorado. He returned to Tennessee to raise his family. Having recovered so well with the use of medical marijuana, he and his wife had a second little boy, making him a new father at the age of 48, to go along with their first son who was closing in his second birthday.”

Everything went along swimmingly, it seemed, until the couple decided to seek health assistance from the State of Tennessee for their two boys’ developmental disabilities — acquired through lead poisoning.

That request would be conditional to a urine test — which Michael agreed to — and failed with flying colors, stunning medical staff, who balked when recording highest concentration of THC in a person’s blood they’d ever seen.

‘How did he manage this feat?’ they wondered, their trained, non-legal-state suspicions piqued.

“It’s my medicine,” Brooks plainly told officials two years ago. “That’s why I’m even able to be before you today. It saved my life.”

Although Belville doesn’t elucidate on whether the motivation for Brooks’ candor lay beyond any legal obligation for it, that the desperate father pled with a truth backed by a plethora of government and independent studies — and which undoubtedly improved quality and time spent with his boys — should have been a watershed moment for Tennessee officials.

Embarrassingly for them, it wasn’t.

“Within 24 hours, the Tennessee Department of Children’s Services (DCS) had been contacted. They showed up at Michael’s house and took away his two little boys,” High Times reports.

Let that sink in. Father in ill health discovers the only medicine yet to veritably cure his grave predicament, improving symptoms and ability to parent — and the State rewards him by forcefully fracturing the family and traumatizing two kids, too new to life to comprehend anything other than, ‘Why isn’t daddy here?’

Because Michael’s medicine came from nature — not a pill bottle.

Visits with his own kids required he pass obligatory drug screenings — so, the despondent father quit the cannabis regimen. It took less than five months for an onslaught of symptoms to destroy all progress and leave Michael even worse off than before cannabis treatment.

“Michael could visit his boys for a couple of hours every two weeks, but Tennessee has canceled those visitations for the last three months,” Belville continues. “Michael says DCS told him it was for the good of the children, because every time their visitation with Michael and his wife ends, the boys become distraught and traumatized when they are returned to their foster parents.”

He quite eloquently adds, “Yeah, no shit.”

It would take a vacuous dimwit not to see this situation for the atrocity of logic and human rights it is; yet — due to the inanity of geographical happenstance of residence inside the border of these apparently Disparate States — two toddlers have been ripped from a father who gives so much of a shit about their future, he didn’t bother lying about his Colorado cannabis cure to Tennessee officials, who recoiled and Just Said No, thus, condemning dad to quickened death for outstanding parenting.

In no place but Dante’s treacherous 9th Circle of Hell does this sequence of arduously authoritarian events even make sense — much less, display sterile compassion — particularly when weighed against any possible negative aspects of Michael’s use of cannabis purely for medicinal reasons.

This writer, and undoubtedly countless others, summarily concur with Belville’s redux of this real-life totalitarian Greek tragedy permitted to have happened in this supposedly freedom-cherishing ‘exceptional’ nation in modern times,

“What Tennessee is doing is evil.”

You agree — and want to do something? Contact Tennessee Governor Bill Haslam and, considerately, express your feelings or assessment of the situation concerning Tennessean Michael Brooks and his beloved children, through the contact form, here.

Additionally, “Send one with all the love and kindness you can spare to [email protected]. Let him know there are people out there who care and are fighting every day to end this vicious war on people who use marijuana.”

This is what happens when the cure for your disease isn’t approved in the individual Police State of your residence.