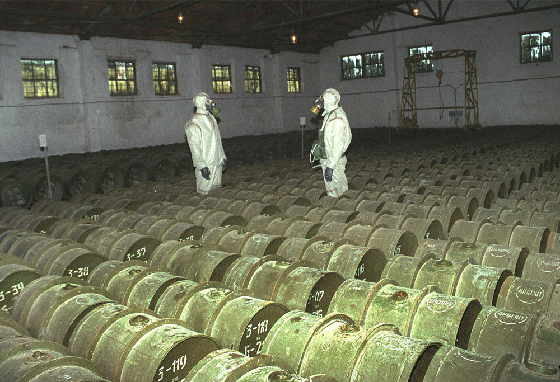 The Pentagon carried out a series of secret chemical and biological weapons tests on American military personnel in the 1960s and 1970s, McClatchy DC reports.

Known as Project 112 and Shipboard Hazard and Defense (SHAD), some 6,000 military personnel were involved in the tests, most from the Army and Navy.

The purpose of the tests, carried out between 1962 and 1974, was to develop a response plan to a chemical attack—using deadly nerve agents such as Sarin and Vx gas, as well as bacteria such as E. Coli—and to identify weaknesses in U.S. warships.

“Veterans were exposed to some of the most extreme and hazardous agents […] and they now suffer from debilitating health care conditions,” said Ken Wiseman, senior vice commander of the Virginia VFW branch, at a press conference on Wednesday.

Exposure to Sarin, the same nerve agent Syrian President Bashar al-Assad stands accused of using on his own people last April, can produce symptoms ranging from difficulty breathing and dimmed vision to coma and death. The Trump administration launched a retaliatory missile strike on the Syrian regime for even being accused of using such an agent.

Information about the tests first surfaced in 2000. At the request of the Department of Veterans Affairs, the Pentagon released some limited data about the nature of the tests, including the locations and the agents used. Since then, the VA has sponsored studies by the National Academies of Sciences, Engineering and Medicine in 2007 and 2016 to look at the tests’ effects.

While they found no significant difference in the health of veterans involved in the tests and those who were not, the authors acknowledged the difficulty of studying this issue.
“Our task was challenging because of the passage of time since the tests, and because many of the documents related to the tests remain classified,” last year’s report said. “Our requests for declassification of additional documents were not approved.”

Until Thursday, a bipartisan group of congressmen including Reps. Mike Thomspon, Don Young and Walter Jones pushed to get the documents about the tests declassified, or to at least receive an explanation why they must remain secret.

“It’s been over 50 years since these tests were conducted and the DOD has yet to provide a complete accounting of what truly happened to our service members,” Thompson said. “Veterans can’t wait any longer.”

Unfortunately, on Thursday House lawmakers shot down the effort, outright preventing a vote on whether or not to disclose details of the chemical tests.

Caroline Boothe, a spokeswoman for the House Rules Committee, the body that decides what gets considered on the House floor, said the committee felt the decision to declassify the documents was better left to White House officials, such as Defense Secretary James Mattis.

“These tests were an ugly part of our history,” Thompson said on the House floor on Thursday. “They put veteran lives at risk. And our veterans have every right to know what it was they were exposed to, how much they were exposed to, we need to think about their safety and their security.”

The disclosure may still have a chance in the senate, however, as a Republican senator from Kansas, Jerry Moran, is also on board the effort.

The chemical tests conducted in the 1960s and 1970s would not constitute the first unethical experiment involving bio-chemical agents. The U.S. government, decades before the tests in question, carried out numerous similar experiments on unsuspecting civilian populations and military personnel alike.