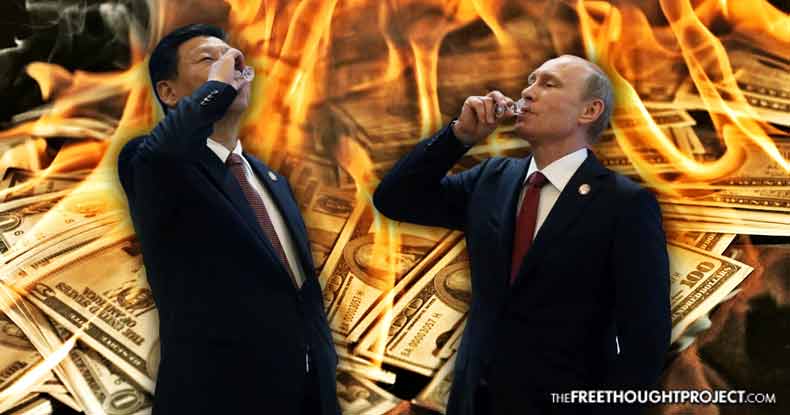 The formation of a BRICS gold marketplace, which could bypass the U.S. Petrodollar in bilateral trade, continues to take shape as Russia’s largest bank, state-owned Sberbank, announced this week that its Swiss subsidiary had begun trading in gold on the Shanghai Gold Exchange.

Russian officials have repeatedly signaled that they plan to conduct transactions with China using gold as a means of marginalizing the power of the dollar in bilateral trade between the geopolitically powerful nations. This latest movement is quite simply the manifestation of a larger geopolitical game afoot between great powers.

According to a report published by Reuters:

Sberbank was granted international membership of the Shanghai exchange in September last year and in July completed a pilot transaction with 200 kg of gold kilobars sold to local financial institutions, the bank said.

Sberbank plans to expand its presence on the Chinese precious metals market and anticipates total delivery of 5-6 tonnes of gold to China in the remaining months of 2017.

Gold bars will be delivered directly to the official importers in China as well as through the exchange, Sberbank said.

Russia’s second-largest bank VTB is also a member of the Shanghai Gold Exchange.

To be clear, there is a revolutionary transformation of the entire global monetary system currently underway, being driven by an almost perfect storm. The implications of this transformation are extremely profound for U.S. policy in the Middle East, which for nearly the past half century has been underpinned by its strategic relationship with Saudi Arabia.

THE RISE & FALL OF THE PETRODOLLAR

The dollar was established as the global reserve currency in 1944 with the Bretton Woods agreement, commonly referred to as the gold standard. The U.S. leveraged itself into this power position by holding the largest reserve of gold in the world. The dollar was pegged at $35 an ounce — and freely exchangeable into gold.

By the 1960s, a surplus of U.S. dollars caused by foreign aid, military spending, and foreign investment threatened this system, as the U.S. did not have enough gold to cover the volume of dollars in worldwide circulation at the rate of $35 per ounce; as a result, the dollar was overvalued.

America temporarily embraced a new paradigm in 1971, as the dollar became a pure fiat currency (decoupled from any physical store of value), until the petrodollar agreement was concluded by President Nixon in 1973.

The quid pro quo was that Saudi Arabia would denominate all oil trades in U.S. dollars, and in return, the U.S. would agree to sell Saudi Arabia military hardware and guarantee the defense of the Kingdom.

A report by the Centre for Research on Globalalization clarifies the implications of these most recent moves by the Russians and the Chinese in an ongoing drive to replace the US petrodollar as the global reserve currency:

Fast forward to March 2017; the Russian Central Bank opened its first overseas office in Beijing as an early step in phasing in a gold-backed standard of trade. This would be done by finalizing the issuance of the first federal loan bonds denominated in Chinese yuan and to allow gold imports from Russia.

The Chinese government wishes to internationalize the yuan, and conduct trade in yuan as it has been doing, and is beginning to increase trade with Russia. They’ve been taking these steps with bilateral trading, native trading systems and so on. However, when Russia and China agreed on their bilateral US$400 billion pipeline deal, China wished to, and did, pay for the pipeline with yuan treasury bonds, and then later for Russian oil in yuan.

This evasion of, and unprecedented breakaway from, the reign of the US dollar monetary system is taking many forms, but one of the most threatening is the Russians trading Chinese yuan for gold. The Russians are already taking Chinese yuan, made from the sales of their oil to China, back to the Shanghai Gold Exchange to then buy gold with yuan-denominated gold futures contracts – basically a barter system or trade.

The Chinese are hoping that by starting to assimilate the yuan futures contract for oil, facilitating the payment of oil in yuan, the hedging of which will be done in Shanghai, it will allow the yuan to be perceived as a primary currency for trading oil. The world’s top importer (China) and exporter (Russia) are taking steps to convert payments into gold. This is known. So, who would be the greatest asset to lure into trading oil for yuan? The Saudis, of course.

All the Chinese need is for the Saudis to sell China oil in exchange for yuan. If the House of Saud decides to pursue that exchange, the Gulf petro-monarchies will follow suit, and then Nigeria, and so on. This will fundamentally threaten the petrodollar.

According to a report by the Russian government media, significant progress has been made in promoting bilateral trade in yuan, between the two nations, as the first step towards an even more aambitiousplan—using gold to make transactions:

One measure under consideration is the joint organization of trade in gold. In recent years, China and Russia have been the world’s most active buyers of the precious metal.

In April, Sberbank expressed interest in financing the direct import of gold to India—also a BRICS member. Make no mistake that a BRICS gold marketplace could be used to bypass the dollar in bilateral trade, and undermine the hegemonic control enjoyed by the US petrodollar as the global reserve currency.

“In 2014 Russia and China signed two mammoth 30-year contracts for Russian gas to China. The contracts specified that the exchange would be done in Renminbi [yuan] and Russian rubles, not in dollars. That was the beginning of an accelerating process of de-dollarization that is underway today,”according to strategic risk consultant F. William Engdahl.

Russia and China are now creating a new paradigm for the world economy and paving the way for a global de-dollarization.

“A Russian-Chinese alternative to the dollar in the form of a gold-backed ruble and gold-backed Renminbi or yuan, could start a snowball exit from the US dollar, and with it, a severe decline in America’s ability to use the reserve dollar role to finance her wars with other peoples’ money,” Engdahl concludes.