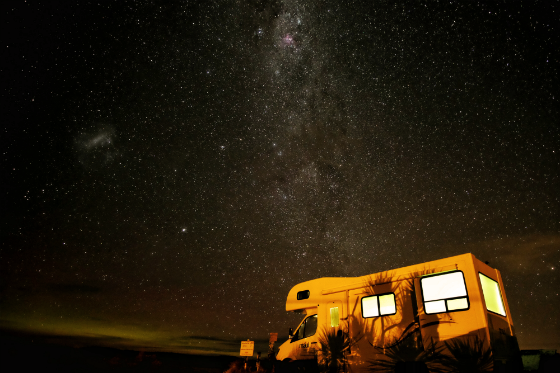 Having spent years without a place to call home besides the streets, Clem Smith experienced what must have been a bittersweet windfall, when his mother bequeathed $214,000 in a will upon her passing — facilitating the purchase of property and stability in the future with the completion of a house he planned to construct.

In the interim, Smith allotted part of that inheritance to stock his new Conifer, Colorado, property with a used car, an older front-end loader, dump truck, shipping container, chicken coop — complete with four hens — and an RV, intended as housing only until construction of the home is complete.

“Of the $214,000 inheritance,” reports local ABC affiliate, Denver7, Smith “spent $125,000 for the property and put the rest into improvements for a power connection, water well, septic drawings, septic engineering and road engineering.”

In her passing, Smith’s mother bestowed the one thing her son hadn’t felt in over six years: security.

This seemingly impossible dream — a physical address at the place where he looked forward to growing old — abruptly metamorphosed into reality.

But it was tragically and avoidably ephemeral.

An irritated neighbor reported the RV, shipping container, and refuse on the property, for which Smith received code violation citations — under the premise those items were being stored on otherwise vacant land, and that others would be allowed to stay and live in the shipping container.

Smith vehemently denies the latter allegation, telling Denver7, “I believe the person that complained came in (the shipping container) and saw a dresser and thought people were going to try to live here.”

That dresser serves as a storage container and workbench, he asserts, used for construction and other planning.

“Jeanie Rossillon, Jefferson County’s director of development and transportation, said that under existing code, the RV is considered an accessory and cannot be parked on the property without a house. Ditto for the shipping container,” Denver7 notes.

To the property owner, it isn’t the time frame, but the fact he’s actively building the home — himself — as quickly as he’s able, and harbors no designs to live in the camper permanently. But the county insists he move the two items off the property — at his now-limited expense — or be fined $500 to $1,000, with potential additional repercussions down the road.

If he leaves with the RV, Smith would have to avail himself of a Walmart parking lot, making a commute — to the property he owns to work on the house — a gas-guzzling arduous affair.

“I don’t think it’s fair,” he opined. “I’ve been on the homeless circuit for several years and everybody at the campgrounds and at Walmart, is hoping to get a piece of property and build their own home.”

All frugality notwithstanding, the inheritance has already dwindled — Smith worries the nitpicky strictures will ultimately force him back onto the streets, despite the dream being palpable.

“It’s also about expectations and balancing everyone’s property rights,” she added, alluding to the unnamed neighbor who reported the violations as well as something vague about hippies in schoolbuses camped on nearby mountains in the 1970s — while failing to elaborate on Smith’s unique predicament — much less, the violation of his property rights.

“I own this property,” Smith, despondent and emotional, told Denver7. “I paid for it in cash. It’s all mine.  I should be able to live on it for a certain amount of time, while I’m surveying, engineering or planning.”

Having his ultimate dream within reach for such a fleeting time — and facing extraordinary callousness from the inflexible State, due only to a neighbor’s upturned nose at the activity Smith undertook on property he owns — has filled the man with anxiety and despair.

Worse, the ludicrous turn of events threatens to rob Smith of the most cherished gift his mother’s estate offered: security.

No state — Colorado, here’s lookin’ at you — can describe itself as compassionate, even one iota, on the issue of homelessness, and then place obstacles this mountainous in the path of those doing their best to overcome the problem.