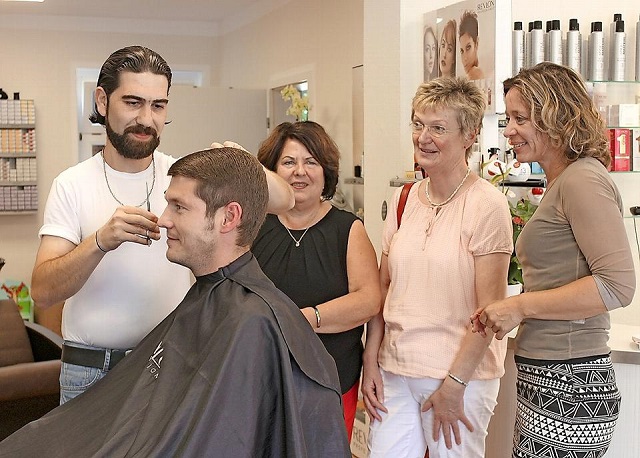 Mohammad Hussain Rashwani was hailed in the media as the “paramount example of successful integration” after he got a job as a hairdresser at a salon in Herzberg, Germany in late 2015.

After a little over a year on the job, he decided to slit his female employer’s throat.

From Lausitzer Rundschau as translated by Gates of Vienna:

“For me there weren’t any signs that I could see”

Herzberg’s master hairdresser talks about what is motivating her these days since the attack by her Syrian employee two weeks ago.

Should she have seen this attack against her coming? She keeps asking herself this question over and over. And she can’t find an answer. “Even today, I do not know what I should think. Until that Wednesday evening, he was an endearing man. I believed up to the very last minute that something good could come of him because I appreciated his professional abilities very much,” Ilona F. says.

The Herzberg woman doesn’t want to talk about the attack itself; her thoughts are much more circling around ‘why’ again and again. “Did I intervene too much? Was I too strong for him? Did we, my husband and I, organize too much for him?” These and other thoughts are constantly crossing her mind. But there weren’t any signs that the Damascus-born Syrian maybe had other plans. His mother, which whom Ilona F. was in contact, had repeatedly written how grateful her son was for the chance that he received and how much he had respected the “she-boss”. “He even assured my husband and me personally of this.”

Yet still, something had to have happened to him that made him commit this terrible bloody deed. “For me, there were no signs that something like this could happen,” the 64-year-old says, looking back. But, she admits, he had changed considerably in the past few months. Ilona F. explains: “We had invested a lot of time in him after our spectacular beginnings, and we had helped him in every way possible. We had plans. He is an outstanding hairdresser. The customers were super-happy with his work. Until the very last minute I had believed that things were going to work.”

Even then changes started to set in. He, a Muslim who until now did not seem in any way a devout believer, had began to talk about Allah more and more. This certainly got on her nerves for over time. He also quit visiting the hairdresser and her husband at home. Before the changes he came by almost every day. They had talked about everything, professional and private. But he had begun to neglect his study of the German language more and more. “He kept assuring me that he wanted to learn the language, but later. More and more he said later this, later that, when we talked about his future,” the businesswoman recounts.

And then there were also problems in the salon. Mohammad H. came to work too late more often; he didn’t take time very seriously. He became very reluctant to drive to work at Schönewalde, where his boss owned a second hair salon. And during the week the attack took place, he outright refused to go.

After a disagreement in the Herzberg salon, when a customer was unhappy with the work of the Syrian hairdresser, she had given him notice that they had to talk. “I knew it couldn’t go on like this. But immediately the question arose in my mind, what would become of him if I were to throw him out. After all, I still believed in him.”

That this by now was a fatal mistake is something the Herzberg woman is only slowly beginning to realize. “That I could have been so wrong in my judgment of another person,” she shakes her head. “Actually, I feel really sorry for him.”

But she is increasingly pleased at how much sympathy has been pouring in over the past two weeks from “almost complete strangers that I didn’t even know.” Among them even Syrians. They brought her flowers and in a letter had apologized for the attack that their countryman had committed and they distanced themselves from it [translator’s note: according to her, they distanced themselves from the deed, but not from the attacker, at least that’s how I read this].

“I don’t hate Syrians,” Ilona F. says. “Integration could have worked, especially considering all the support he received.” As far as health is concerned, she’s still mending, she says. “It’s all still just too much trouble for me right now,” she says and hopes for greater peace.

Indeed, things have gotten a lot more peaceful in Europe since opening the floodgates. Perhaps if we just hope it all works out it will.