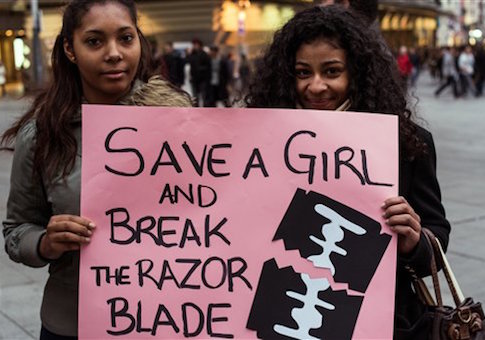 Female genital mutilation is nothing like circumcision. It is a barbaric act committed against little girls who are a part of Islamic communities.

The law was both written and passed following the widely circulated story of several girls in Minnesota and Michigan receiving the procedure from a doctor in Detroit. The central government claims that, according to their investigation, female genital mutilation is being pushed by an India-based Muslim sect called Dawoodi Bohra.

The practice, also known as female circumcision or cutting, is a federal crime punishable by five years in prison. But the new Michigan laws — which also give prosecutors and victims more time to pursue such cases — create harsher penalties for procedures that have been condemned by the United Nation but are common for girls in some parts of Asia, Africa and the Middle East.

Michigan is the 26th state to officially ban the practice in the U.S. The state laws take effect in October.

The new laws apply to parents or others who knowingly facilitate genital mutilation, including by transporting girls to another state for the procedure. Defendants in such cases will not be able to defend themselves in court by saying it is a custom or ritual.

Under the laws, the statute of limitations for criminal charges to be filed will be 10 years or by the alleged victim’s 21st birthday, whichever is later. Victims will be able to sue for damages until their 28th birthday, which is longer than the previous two-year window after the discovery of harm.

The state Department of Health and Human Services will develop an educational and outreach program targeting specific populations, including girls who may be at risk. Teachers, physicians and police also will receive information.

“Those who commit these horrendous crimes should be held accountable for their actions, and these bills stiffen the penalties for offenders while providing additional support to victims,” Gov. Rick Snyder said in a statement. “This legislation is an important step toward eliminating this despicable practice in Michigan while empowering victims to find healing and justice.”

One of the bill’s sponsors, State Senator Tonya Schuitmaker (R-Lawton) said, “This barbaric procedure has no accepted health benefits and is only performed to exercise control over young women. We owe it to our girls to give law enforcement and prosecutors every available tool to bring the perpetrators to justice.”

Still, a Facebook page promotes FGM as a good thing.

Before I hear anyone say that this is not justified by Islamic law, take a look at this:

“Circumcision is obligatory (for every male and female) (by cutting off the piece of skin on the glans of the penis of the male, but circumcision of the female is by cutting out the bazr ‘clitoris’ [this is called khufaadh ‘female circumcision’]).” — ‘Umdat al-Salik e4.3, translated by Mark Durie, The Third Choice, p. 64

In June, it was reported that up to 100 girls may have had their genitals cut in Michigan.

Sadly, some college students are falling prey to Islamic propaganda regarding FGM. Several Columbia University students not only support FGM, but also want Planned Parenthood to fund it.

If you want to see what female genital mutilation is really all about, I suggest this excellent piece by Daniel Greenfield titled Female Genital Mutilation Exposed in Little Palestine.