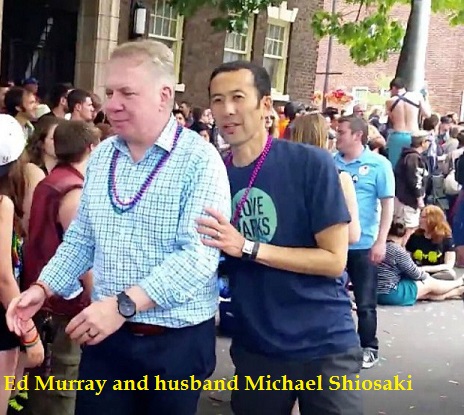 In April, Dr. Eowyn reported that homosexual Seattle Mayor Ed Murray was accused of having sexually molested a 15-year-old boy in the 1980s. At the time, Murray would have been in his early 30s.

“Lewis Kamb and Jim Brunner report for Seattle Times that on April 6, 2017, a 46-year-old man with the initials D.H., a resident of Kent, Washington, filed a lawsuit in King County Superior Court, claiming that Ed Murray had “raped and molested him” over several years, beginning in 1986 when the man was a 15-year-old crack-cocaine addicted high-school dropout. Murray gave the teen payments of $10 to $20.

Two other men, Jeff Simpson and Lloyd Anderson, had accused Murray of abusing them in the 1980s when Simpson was 13 and Anderson was 16 years old. Both men had known Murray when they were growing up in a Portland center for troubled children.”

Now news comes out that the mayor, who is not seeking re-election this year, was investigated by Oregon Child Protective Services (CPS) in 1984. The CPS determined that Murray should never again be a foster parent.

From MyNorthwest.com (via the Seattle Times) reports that a child welfare investigator in Oregon concluded in 1984 that Seattle Mayor Ed Murray sexually abused his foster son, The Seattle Times reports.

Mayor Murray has publicly denied the allegations and made it a point that prosecutors in Oregon decided not to charge him years ago.

Simpson is one of four men who have accused the mayor of abuse when they were teenagers. Most recently, Delvonn Heckard, dropped a lawsuit against Murray, but promised to refile when the mayor has completed his term. Lloyd Anderson and Lavon Jones also allege the mayor sexually abused them.

Mayor Murray dropped out of the race for re-election, claiming Heckard’s lawsuit would be too distracting for the city. But he believes the withdrawal of Heckard’s case vindicates him.

As for Simpson, the Times reports that the Multnomah County prosecutor withdrew a criminal case against Murray not because they thought Simspon was lying, but because of his “troubled personality.”

Both Murray and Simpson appeared to be surprised that the CPS records still exist.  The Times reports that upon hearing the news, Simpson responded: “Wow, wow. Thank you, Jesus.”

In an interview with the Times, Murray and his attorney questioned why Oregon officials would have held on to the CPS records without notifying the mayor. Murray pointed out that a criminal case was withdrawn before a jury could vote to indict him.

“Other than the salacious nature of it, I don’t see what the story is,” Murray told the Times. “The system vindicated me. They withdrew the case.”

The CPS records also show that child-welfare officials decided that Ed Murray should never again be a foster parent.