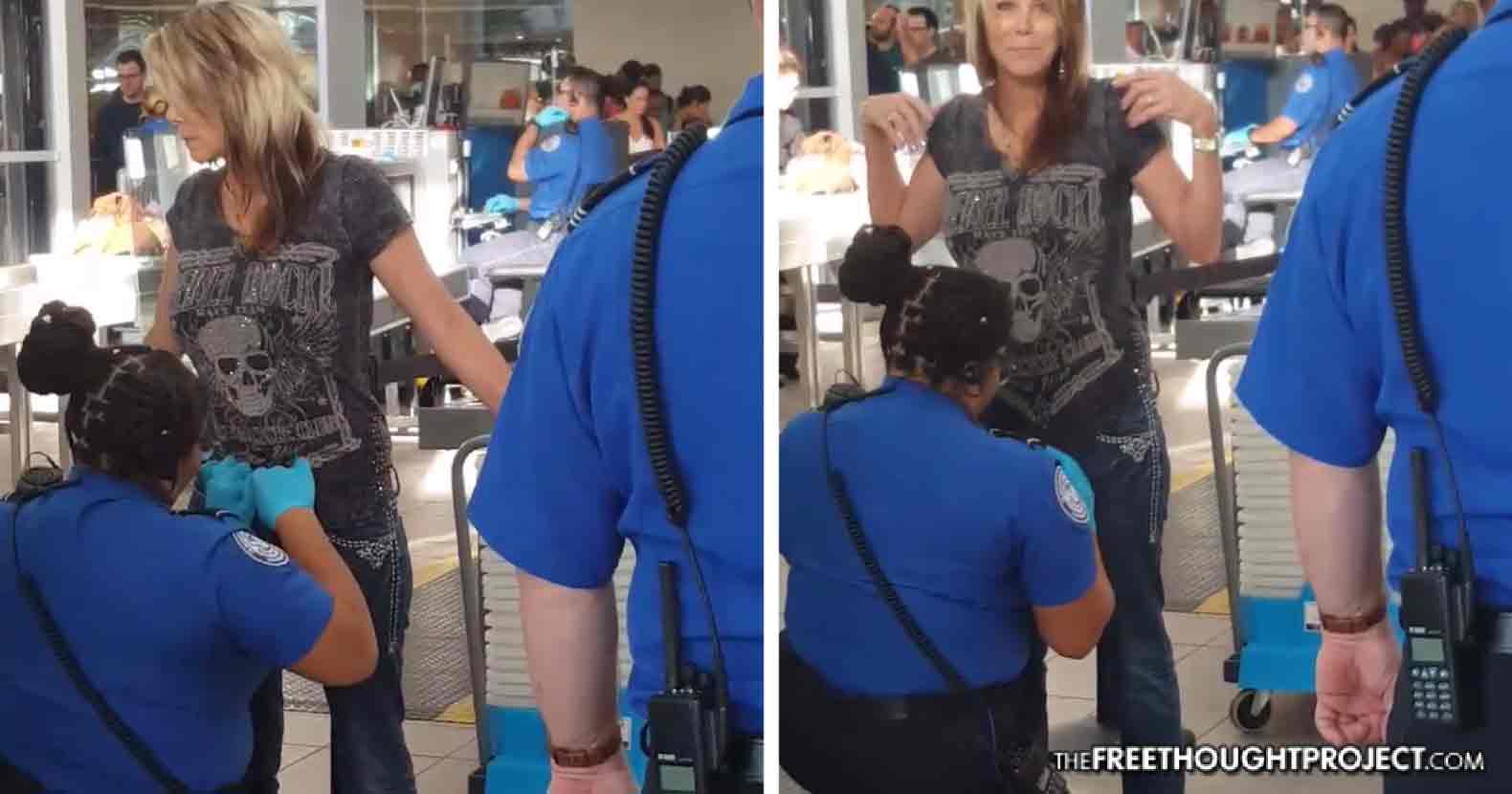 The TSA — one of America’s most corrupt and incompetent agencies whose ostensible job is fighting terrorism — is apparently so unsatisfied with the mere ability to strip search babies, remove colostomy bags, beat up blind cancer patients, and fondle your genitalia, that they announced a more invasive physical pat-down earlier this year. The pat-downs, which TSA warned would probably prompt assault complaints with the police department because of their invasive nature, are now apparently being implemented.

A video uploaded to Facebook by John Longo has caused a firestorm of debate as well as serve to expose the tyrannical and intrusive nature of these new TSA pat downs.

After his wife was selected for ‘special screening’ — after TSA apparently missed the watch and bracelet on her wrists — Longo pulled out his camera and began recording.

“Yeah, we’re gonna miss my plane because the agent wants to feel up my wife,” he said as another TSA agent confronted him and attempted to block the video with his body.

In the video, the female TSA agent is seen feeling literally every single inch of Mrs. Longo’s body. Nothing was off limits. Her breasts, her vagina, all of it was fair game to the agent.

This groping and feeling up was all done in the name of keeping Americans safe. And, according to many who commented on the post, it is entirely justified.

According to study after study of TSA effectiveness tests, they are horrible at stopping potential terror attacks. In fact, an internal investigation of the TSA revealed security failures at dozens of the nation’s busiest airports, where undercover investigators were able to smuggle mock explosives or banned weapons through checkpoints in 95 percent of trials, according to a bombshell investigative report by ABC.

But their lack of effectiveness still has people trying to justify their own molestation. In one disgusting comment, a Facebook user said he would allow his children to undergo ‘anything’ the TSA wanted to do to keep them safe.

Even a Facebook user claiming to be an aviation security trainer called out the invasive search in the comments, yet most Americans remain oblivious.

As a(n) aviation security trainer, that was absolutely excessive fondling! That was not a pat down but a lesson how to caress and feel up a woman. I was looking out for the kiss. I give them a F minus! Yeech!

The TSA, who’s never stopped a terror attack and is unable to stop 95 percent of the tests against its tactics, gropes and molests children and adults alike — who unquestioningly accept it. Americans are being conditioned for a police state and they have no idea.

As the Free Thought Project has pointed out countless times, the TSA has been caught in a myriad of criminal activity — including everything from massive drug trafficking conspiracies to brutal beat downs. Granting this already despicable group of cronies the ability to further dehumanize Americans for the facade of safety is nothing short of irresponsible and tyrannical — and, as this video shows, disgusting.

To the average American who buys into the ‘terrorists hate our freedom’ propaganda, this move by the TSA to grant them the legal ability to grope themselves and their children has been mostly accepted.

The video above is only one of many illustrations of this disgusting and tyrannical practice. Earlier this year, TFTP brought you the video of Jennifer Williamson and her son Aaron who were traveling through the DFW airport when they were targeted by power-tripping TSA agents and police.

Apparently, Williamson’s young son, who has Sensory Processing Disorder (SPD), was deemed a threat by ‘security’ and pulled off to the side for extra screening. Scared for her and her son’s safety, Williamson filmed the interaction. The result is nothing short of infuriating.

Sadly, the groping, molestation, and tyranny all exist because most Americans say nothing when the state implements it. Those who remain silent in the face of injustice are complicit.