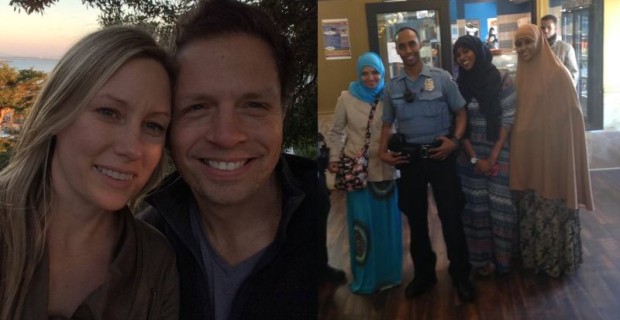 After a Somali police officer in Minneapolis shot dead 40-year-old Australian Justine Damond in what appears to be a senseless murder, the Washington Post’s primary concern was to fret about “Islamophobia” and a “backlash” against the Somali community.

Yoga teacher Damond was gunned down by Somali-American police officer Mohamed Noor after she called the police to report a crime on Saturday night near her upscale Minneapolis home.

Details about the shooting are scarce because both officers involved in the incident claim they did not have their body cameras recording at the time.

Damond, who was set to marry her American fiance Don Damond next month, was in her pajamas talking to Noor’s colleague on the driver side of the police vehicle before Noor leaned over from the passenger side and shot Damond multiple times.

Noor was already under investigation for ‘violently’ forcing a woman to hospital and two other complaints had been made about him. He was previously celebrated as a poster child of multiculturalism after becoming the first Somali to join the Minnesota police force.

She called 911 to report an incident. Police came. They shot and killed her. pic.twitter.com/1cvdudjmOB

In an article entitled After Minneapolis officer in police shooting is named, Somali community braces for backlash, the Washington Post’s Katie Mettler prevaricates on issues of “Islamophobia and innuendo about terrorism” that the Somali community will face as a result of the shooting.

The Washington Post's first concern after a woman was executed by a cop is to worry about "Islamophobia" & Somali's hurt feelings. pic.twitter.com/GeWryPjEdT

Despite being under numerous different investigations, the Post pushes the narrative that Noor was a “role model” for multiculturalism and Muslim integration.

The tone of the piece is similar to those we see after every single terror attack in Europe, where worries about hurt feelings are placed above concerns about people literally being blown up by Islamic terrorists.

The primary concern here should be to immediately suspend Noor while an investigation into the shooting takes place, not mean tweets and criticism of Islam on social media.

The very fact that the Washington Post would choose to highlight this front and center illustrates how hysteria over political correctness is clouding rationality and preventing society from tackling the root causes of violence.