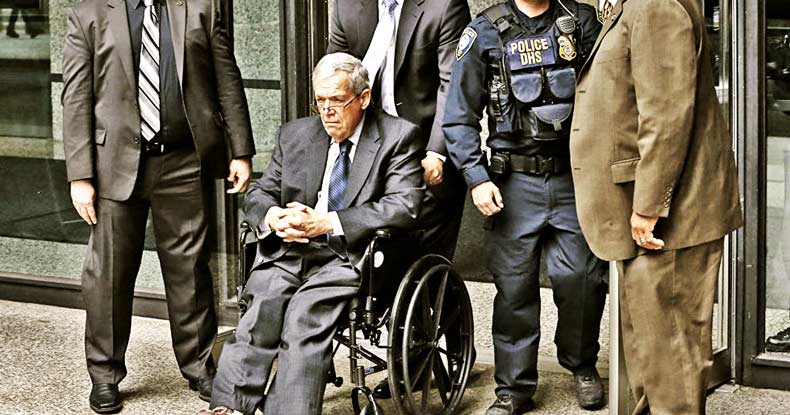 In April of last year, Dennis Hastert, former Speaker of the House and admitted child rapist, was sentenced to 15 months in prison after he was caught paying his victims to keep quiet. However, he was just released on Tuesday — two months before finishing his already insultingly lenient sentence.

Hastert was sentenced, not for raping children, but for illegally structuring bank transactions in an effort to cover up his sexual abuse of young boys.

According to the Chicago Sun Times, Hastert, 75, is now under the supervision of a residential re-entry management field office based in Chicago, according to Bureau of Prisons online records. That means he is likely at a halfway house in the region monitored by that office, or he is on home confinement.

When asked why he was let out early, the Bureau of Prisons did not reply, according to the Times.

Hastert was an admitted serial child rapist, yet because he is a well-connected politician and former Speaker of the House, this vile man’s victims will receive no justice.

In spite of the fact that the judge called Hastert a “serial child molester,” when he was sentenced, Hastert was never convicted of his crimes against children — only lying to cover it up.

As the Times notes, the feds hit Hastert in May 2015 with a blockbuster indictment that accused him of illegally structuring bank withdrawals and lying to the FBI. He pleaded guilty to the structuring and acknowledged the lying in October 2015. Then, during his sentencing hearing in April 2016, he admitted to the judge that he sexually abused children in the 1970s while he was a wrestling coach at Yorkville High School.

After being exposed for bribing his victims to stay silent about his crimes against them, this admitted child rapist had the audacity to sue his them for being caught.

Because one of the boys he raped broke his silence, in spite of the $1.7 million in hush money Hastert gave him, this pedophile politician demanded his money back.

When the victim, known only as ‘Individial A’, broke his silence, Hastert’s child rapes were exposed — resulting in the subsequent prosecution — for which he is now getting off early.

Individual A did not go public with this information — he merely spoke to the FBI after the transactions were uncovered by investigators. The victim’s attorney, Kristi Browne told NBC that it was Hastert who was at fault.

“Mr. Hastert has decided that rather than live up to his promise to compensate his victim for his molestation and resulting injury, he will ask his victim to pay him,” she said in a statement.

On top of these high-profile victim cases, another victim came forward just two months ago.

In that case, an Illinois resident known as “Richard Doe” says former Speaker of the U.S. House of Representatives, Dennis Hastert is the teacher who raped him, and he can no longer stay silent.

Because the crime is sexual in nature, Richard’s true identity is being withheld. Richard says the crime happened when he was in elementary school. Because it occurred years ago, the criminal statute of limitations — like the other cases — has expired so he is seeking compensation in civil court.

Hastert, who happens to have a long and friendly past with none other than the Podesta family, will now be a relatively free man after only serving 13 months in a low-security medical facility for admitting to the rape of multiple children. In the land of the free, this will be referred to as ‘justice.’