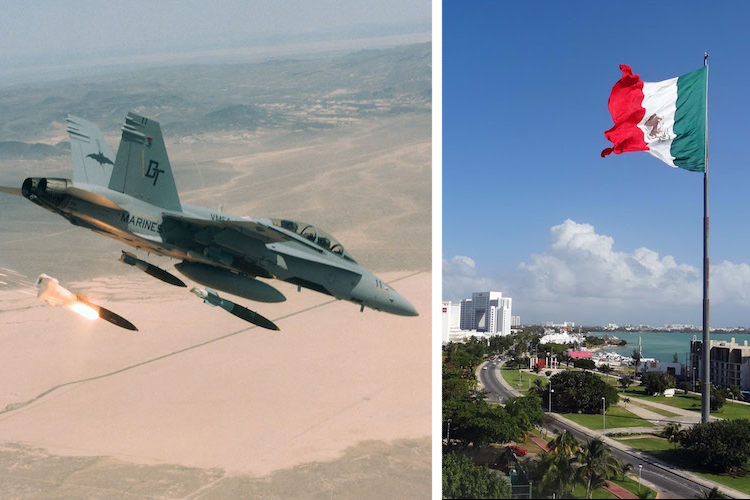 Imagine how many lives we can save of those 500,000 Americans predicted to die because of Mexican opioids and meth. War with Mexico doesn’t sound so crazy anymore, does it? ~Matt Mayer

To a hammer, every problem looks like a nail, and in the face of a deadly opioid epidemic, geopolitical think-tankers are now recommending a full-scale military invasion of Mexico.

Writing as a columnist for U.S. News and World Report, Matt Mayer recently penned a piece entitled, ‘To Solve the Opioid Crisis, Go to War: Is it so crazy to consider using military force against Mexican drug cartels?’ His argument is that by declaring war on Mexico’s drug cartels we can prevent the deaths of an estimated 500,000 Americans who are forecasted to die of opioid overdoses in coming years.

We will spend tens of billions of dollars on addiction treatment, overdose responses, law enforcement activities, criminal justice processes and the ancillary costs associated with caring for the children of those who die from overdoses. Regardless of how much we spend, if we cannot substantially reduce or stop the flow of opioids and other death drugs across our southern border (and to a lesser extent through our mail system via China), we will continue to see tens of thousands of Americans die each year due to opioid and meth overdoses, with enormous damage to their families and communities. ~Matt Mayer

Previously, Mayer was an official at the U.S. Department of Homeland Security, and is a member of the Heritage Foundation, a conservative think-tank devoted to advocating the interests of the war industries. His train of thought on Mexico is to be expected from the think-tank culture which subtly manipulates American foreign policy in favor of the financial interests aligned with the manufacture and sale of war materials, ie. the military industrial complex.

This unfortunate reality raises a very uncomfortable question: Do we need to go to war with Mexico to ultimately win the war against opioids and other death drugs? By “go to war,” I mean a formal declaration of war by Congress against Mexico in which we use the full force of our military might to destroy the cartels, the poppy fields and all elements of the drug trade. Ideally, as our fight is not with the Mexican government, its military or its people, which try to weaken the cartels, we would try to partner with those entities against the cartels, much as we partnered with the South Vietnamese government and military against the Vietcong and the North Vietnamese Army.

Interestingly, Mayer cites the American strategy in Vietnam as an example of how this policy might look, yet he omits the fact that the U.S. lost the Vietnam war after a prolonged tragedy which killed millions of Vietnamese people and tens of thousands of Americans. Hardly a success story.

Mayer’s argument serves as a perfect example of simplistic Orwellian military propaganda, primarily because it intentionally frames a complex issue in the most basic terms, while deliberately omitting critical details regarding the opioid crisis.

Yes, Mexico’s cartels are a big part of the problem, but China is also involved in shipping opioids into America. More importantly, though, most of the blame for this crisis rests on the American pharmaceutical companies and doctors who have been conspiring to hook Americans on painkillers. The addiction model for opioids now begins with a prescription and ends with street drugs.

Declaring war on the sovereign nation of Mexico would kill hundreds of thousands of people, further destabilize our neighbor, and cause a mass exodus of refugees throughout North and Central America. This would be so much like fighting ISIS in Syria, a devastating affair that has destroyed an entire civilization.

Furthermore, Mayer omits the fact that the cartels exist because of the American war on drugs, a policy that created the black market which is now dominated by the cartels. And nothing in Mayer’s argument gives homage to the fact that drug addiction is a social health issue, and the fact that the war on supply will not address demand.

This line of thinking frightening, and is the definition of Orwell’s doublespeak. Turning a drug crisis problem into an international war problem is the most extreme form of insanity, so yes, to answer the question in his subtitle, it is crazy to use military force against Mexico’s drug cartels.

We’ve already seen how cannabis legalization has completely transformed an unhealthy black market into a thriving public market in states where it has been legalized, but the think tanks will come up with any bit of insanity to fill their coffers with money and with the blood of war’s dead.

Isaac Davis is a staff writer for WakingTimes.com. He is an outspoken advocate of liberty, self-ownership, and of a voluntary society. He is an avid reader of history and passionate about becoming self-sufficient to break free of the control matrix.

This article (Think Tanks Want Solve the Opioid Crisis With a Military Invasion of Mexico) was originally created and published by Waking Times and is published here under a Creative Commons license with attribution to Isaac Davis and WakingTimes.com. It may be re-posted freely with proper attribution, author bio, and this copyright statement.