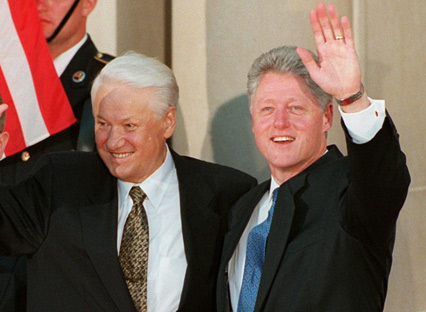 Press outlets are now reminding us that President Bill Clinton interfered in the 1996 Russia election that brought Boris Yeltsin to power for a second term.

This is by way of saying, “Well, if Putin helped Trump win the 2017 election, so what? The US did the same thing in Russia.”

That’s an interesting but not terribly strong argument. However, there is another piece to the 1996 Clinton op, and it is explosive and quite relevant.

Let’s start here, with the 1996 leak of a document detailing a meeting between Bill Clinton and Boris Yeltsin. Sean Guillory, writing at jacobinmag.com, states:

“According to a White House memo leaked to the Washington Times in March 1996, Clinton and Yeltsin had agreed to support each other in their respective reelection bids.”

Bill Clinton asked the president of Russia to interfere in a US presidential election.

The Washington Post (2/26/96) reports on “…a memo written by Deputy Secretary of State Strobe Talbott, according to White House press secretary Michael McCurry. It [the memo] recounted talks between Clinton and Yeltsin earlier this month when both leaders attended an anti-terrorism summit in Egypt.”

“The memo, as quoted in the [Washington] Times, said Clinton pledged to work with Yeltsin to maintain ‘positive’ relations with the United States as both men seek reelection this year. One way to do this, the memo quoted Clinton as saying, is for Yeltsin to stop restricting poultry imports. Clinton said ‘this is a big issue, especially since 40 percent of U.S. poultry is produced in Arkansas,’ the memo said.”

We had a US president, Bill Clinton, specifying HOW the Russian president could help him win a second term as US president.

The Associated Press reports, on March 28, 1996: “Citing a classified memo, the Washington Times reported yesterday that Clinton had promised Yeltsin to back his re-election bid by formulating “positive” policies toward Russia…On a matter important to his political supporters in Arkansas, Clinton asked Yeltsin to stop restricting poultry imports. ‘This is a big issue, especially since 40 percent of U.S. poultry is produced in Arkansas,’ Clinton said, according to the memo…On Monday, Vice President Al Gore announced Russia was lifting the ban, which was imposed because of the suspicion that U.S. chickens are not inspected sufficiently for salmonella, which causes illness.”

Clinton promises to back Yeltsin in his effort to win the presidency of Russia.

In return, BECAUSE IT IS IMPORTANT TO CLINTON’S POLITICAL SUPPORTERS, Clinton asks Yeltsin to lift Russia’s ban on importing chickens, particularly since 40% of US poultry is produced in Arkansas, Clinton’s home state. And lo and behold, Yeltsin does comply with Clinton’s request for help in winning the 1996 US presidential election. Yeltsin lifts the ban on importing US poultry.

Both presidents agree to interfere in each other’s election.

And it gets worse. The major chicken producer in Arkansas is Tyson. The Fiscal Times reports, on 2/2/16: “…consider a largely forgotten financial scandal that directly involved Hillary Clinton during 1978 and 1979.”

“Under the guidance of an attorney representing Tyson Foods, Hillary Clinton made a $98,540 profit from a $1,000 initial investment in less than one year trading commodity futures. While $98,540 may not seem like much money relative to the Clinton family’s wealth today, it exceeded Bill and Hillary’s combined annual income at the time.”

“…Clinton’s initial trading also had a serious irregularity…her $1,000 initial investment was well below the $12,000 deposit required by the Chicago Mercantile Exchange for the first trades she executed. So not only did Hillary make an extraordinary profit for a novice investor, she did so without following the rules applied to less well-connected traders.”

There is much more to say about the relationship between Tyson Chicken and the Clintons, but we’ll leave it there for now.

So there is a precedent of Russia interfering in a US presidential election (by stark invitation)—and nothing happened to the US president, Bill Clinton, who asked for the interference. Nothing.

Clinton was, of course, upset when the memo of his meeting with Yeltsin was leaked. But here is how he spun his objection:

Washington Post, 2/28/96: “[Clinton Press Secretary] McCurry said Clinton and [National Security Advisor] Lake considered the leak to be far more sensitive than the typical anonymous disclosure that is commonplace in Washington journalism. ‘The president feels like he ought to be able to sit down with the president of Russia and have a private conversation,’ McCurry said.”

Clinton and Yeltsin agreeing to interfere in each other’s presidential election was ignored, as if it were of no concern. The big issue was the leak of the memo. Private and highly felonious deals between two superpower chiefs of state? No problem.

To repeat: this 1996 memo-scandal of enormous proportions didn’t make a dent in Bill Clinton’s second term in office. After a brief press blast, and a round of “I’m shocked” within the Beltway, the roar died and vanished.

If a comparable memo were unearthed from the Trump team today, impeachment proceedings will begin in a matter of hours, and the press would be booking seats for the firing squad.

Soros-paid street soldiers would lift Barack Obama up on their shoulders, break down barriers at the White House, and carry him into the Oval Office.

We need to revisit the old saying, “It’s not the conspiracy (that hurts a political criminal), it’s the cover-up (of the crime).”

There needs to be an addendum. “It’s not the conspiracy, it’s the coverage.” Meaning press coverage.