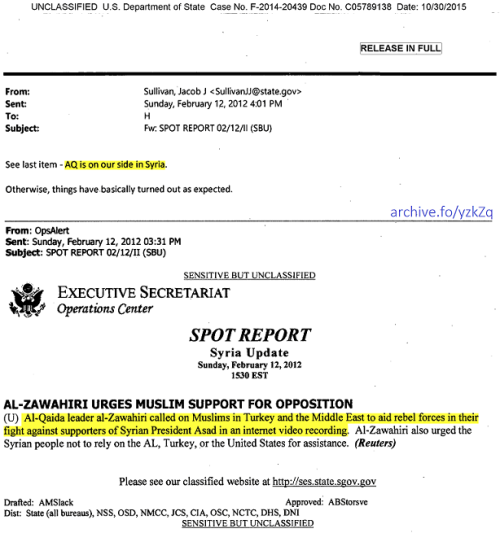 The United States is supposed to be fighting Muslim jihadists like ISIS/Islamic State and Al Qaeda.

Under Obama, however, the CIA has been arming and training so-called rebels in Syria who, we are told, are “moderates,” but in reality are jihadists. See:

Note: Jacob Sullivan, 40, had worked under Secretary of State Hillary Clinton as the State Department’s Director of Policy Planning from Feb. 4, 2011 to Feb. 15, 2013. (Hillary Clinton was Secretary of State from Jan. 21, 2009 to Feb. 1, 2013.) Sullivan was senior policy adviser to Hillary’s failed 2016 presidential campaign. If Hillary had won the election, Sullivan would be a contender for the position of National Security Advisor.

Below is Sullivan’s email:

The Washington Post reports, July 19, 2017, that “President Trump has decided to end the CIA’s covert program to arm and train moderate Syrian rebels battling the government of Bashar al-Assad.”

But this being the anti-Trump Washington Post, the paper snidely calls President Trump’s decision “a move long sought by Russia,” as if Trump does not have a mind of his own.

“The program [of arming Syrian “rebels”] was a central plank of a policy begun by the Obama administration in 2013 to put pressure on Assad to step aside, but even its backers have questioned its efficacy since Russia deployed forces in Syria two years later.

Officials said the phasing out of the secret program reflects Trump’s interest in finding ways to work with Russia, which saw the anti-Assad program as an assault on its interests. The shuttering of the program is also an acknowledgment of Washington’s limited leverage and desire to remove Assad from power. […]

Officials said Trump made the decision to scrap the CIA program nearly a month ago, after an Oval Office meeting with CIA Director Mike Pompeo and national security adviser H.R. McMaster ahead of a July 7 meeting in Germany with Russian President Vladimir Putin.

Spokesmen for the National Security Council and the CIA declined to comment.

After the Trump-Putin meeting, the United States and Russia announced an agreement to back a new cease-fire in southwest Syria, along the Jordanian border, where many of the CIA-backed rebels have long operated. Trump described the limited cease-fire deal as one of the benefits of a constructive working relationship with Moscow. […]

The decision on the CIA-backed rebels will be welcomed by Moscow, which focused its firepower on those fighters after it intervened in Syria in 2015. […]

With the end of the CIA program, U.S. involvement in Syria now consists of a vigorous air campaign against the Islamic State and a Pentagon-run train-and-equip program in support of the largely Kurdish rebel force that is advancing on Islamic State strongholds in Raqqa and along the Euphrates River valley.”

Father Daniel Maes, a Flemish priest who had lived in Syria since 2010, will certainly welcome President Trump’s ending of Obama’s insane policy of arming Syrian jihadists.

According to 79-year-old Fr. Maes, the western media’s coverage of the Syrian war is based on lies. The problem is not Syrian President Bashar al-Assad, who does not persecute Christians. Rather, the problem is U.S.-NATO politicians who support ISIS and Al Nusra (the name of Al Qaeda in Syria) in their quest to topple the Syrian government. As Fr. Maes puts it,

“Christians in Syria suffer from the fact that their fellow-Christians in the West forsake them. They simply do not understand. The real terrorist leaders are in the West and Saudi Arabia. Without Putin, Syria would have ceased to exist.”

“In 2009, Qatar asked Bashar al-Assad to permit running a pipeline through Syria to the Mediterranean. Assad said, ‘We are not going to do that because we are already working on such a pipeline with Russia and Iran.’ Then the war began. Not in 2011.

We must not forget: Homs [a city in western Syria] is an important location for the passage of the pipeline. It’s no coincidence that the violence started right there, and that Qatar’s TV station Al Jazeera was on top of it.

For the West, it is unacceptable that Syria is still one of the few countries with a central bank that is truly independent and that the country had no state debt and thus did not need to be ‘saved’.

And the Turks. They just want to revive the Ottoman empire. It’s scandalous what they did in Aleppo. The city of Aleppo was the industrial heart of Syria. The Turks dismantled all of the factories in a few days and took them to Turkey.

Israel is also a very important motor behind the conflict. The Zionists want a pure Jewish state from the Nile to the Euphrates. They want to chop up Syria into a group of small, weak states, fighting each other. Likewise the old Roman motto: Divide et empera. Divide and rule.

The Israelis are bombarding Syria, they treat injured terrorists and they deliver weapons.

I think Zionism is as bad for Judaism as ISIS is for Islam. But let’s not say that out loud, for many Protestants might take you for the devil.”

While acknowledging that the Russians are aiding Assad partly out of self-interest, Fr. Maes nevertheless points out that:

“Putin is a true Christian, wanting to defend Christianity. And he also wants a multipolar world order, in which no country dominates the rest. It annoys Putin that the Americans do not play by international rules. They overthrew the Ukrainian government, and then had the nerve to say that the Russians responded so aggressively. Syria is a sovereign country. That is what Putin emphasises. He also says: ‘We are not there for the protection of Assad, but for the protection of the Syrian statehood.’ Russia doesn’t want another failed state, like Iraq and Libya. And let’s not forget: The Russian military is the only foreign army in Syria with the consent of the Syrian government. What are other countries doing there? The Americans? The French? The Saudis? They have no right to be there. They are working on the destruction of Syria.”

In ending the CIA’s arming of Syrian jihadists, President Trump will also reduce the outflow of Syrian “refugees” into Europe and America.