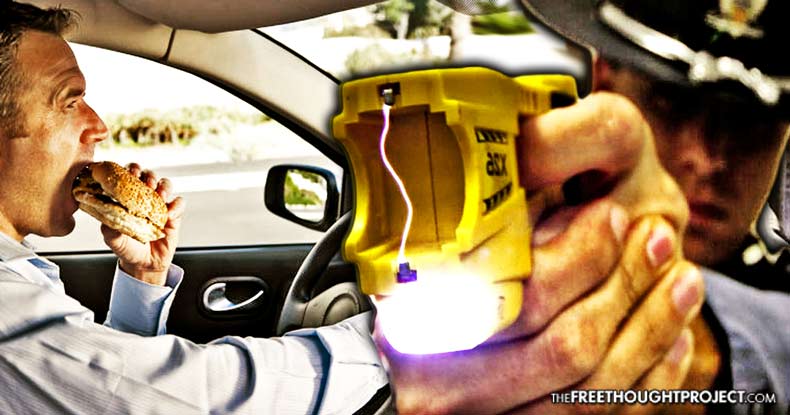 The implementation of the Driving Under the Influence of Electronics Act was expedited from January 2019 to July 23 after Washington Governor Jay Inslee signed a partial-veto, and insisted that “public safety is better served by implementing this bill this year.”

“When you are driving with a cell phone, you are a more dangerous driver than if you are driving drunk with a .08 blood alcohol level,” Inslee said during a press conference. “There’s hardly anything we’ve done in the last several years at the state Capitol to save more lives than this distracted driving law.”

Statistics from the Washington Traffic Safety Commission found that 171 of 568 road deaths in 2015 were “blamed on some form of driver distraction, not necessarily electronics.”

Although both texting and holding a cellphone to your ear while driving are already banned in Washington, the new regulations will outlaw composing or reading any message, taking pictures, and ultimately holding a phone for any reason other than calling 911—even when sitting at a stoplight.

Penalties under the new DUI-E law will include a $136 fee for first-time offenders, a $234 fee for second-time offenders, and a $99 fee for “grooming, smoking, eating or reading while behind the wheel.”

While the fines might not seem outrageous at first glance, Toni Matous, an agent with Magnolia Insurance Agency Inc. in Seattle, told Q13Fox that insurance companies were some of the top lobbyists for the new distracted driving law—and that is not by mistake.

“The $136 ticket you get is going to be nothing compared to the insurance consequences,” Matous said, noting that tickets under the DUI-E law will count as primary offenses that will be added to drivers’ records.

Matous called the law the “new drunk driving,” and said that in the case of a family with a teenaged driver, if that driver receives a DUI-E ticket, it will affect the entire family by making their insurance skyrocket by up to thousands of dollars each year.

In order to cover the costs of implementing the new law, the state’s law enforcement agencies have spent $400,000 to add “6,000 patrol hours aimed at driver distraction.” While distracted driving offenses resulted in over 5,400 citations in Washington in April 2016, numbers are predicted to increase drastically with all of the new infractions that police will have the opportunity to cite.

While this new law in Washington may seem bizarre based on the fact that it makes things such as eating and smoking while driving illegal, it is not the first time a law has been introduced to fine Americans for being distracted. In May 2016, a Democratic assemblywoman from New Jersey introduced a bill to sentence individuals to up to 15 days in jail for the heinous crime of texting and walking.

Washington’s DUI-E law could set a precedent for future laws in other states, but it also allows for an abuse of power by police. It takes away the accountability that makes officers look for a legitimate infraction before pulling a car over, and it gives officers the ability to make their quotas by simply alleging that a driver was looking at an electronic device, even when their vehicle is not moving. As a result, the drivers pay a high price, and both the police state and the insurance companies who lobbied for the new law make a profit.