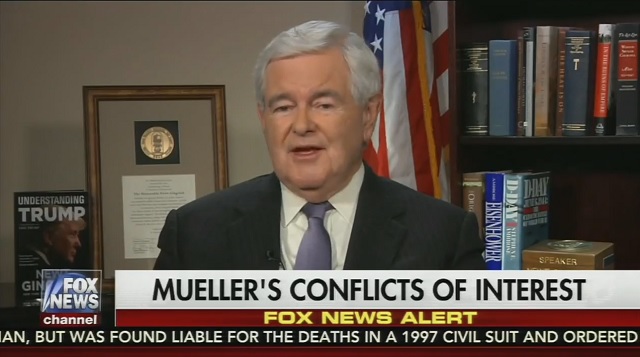 “The Mueller investigation has so many conflicts of interest, it’s almost an absurdity,” Gingrich said. “The law firm that he came from, gave 99.81% of its donations to Hillary Clinton last year.”

“The people that he’s been hiring are all anti-Trump lawyers. It’s hard to understand why he would assemble such a team unless it was a deliberate effort to go after the president and the president’s team. I don’t understand why the House and Senate Judiciary Committees aren’t investigating a lot of this stuff,” Newt said.

He continued: “The point you made about leaks is a perfectly good example. The leaks have to be coming from inside Mueller’s team. So who’s leaking? Why is nothing being done about it? Why are people not being fired? I think it’s very reasonable to say that this is a very dangerous witch hunt that Mueller keeps expanding because he can’t find anything in the original charge. ”

“He’s not going to find anything about Trump and Russia, and yet he’s hired all these guys who have given up their very expensive law services to come out and try to get somebody. And they’re going to eventually find somebody to prosecute because there are too many lawyers being paid too much money for them to go home having accomplished nothing.”