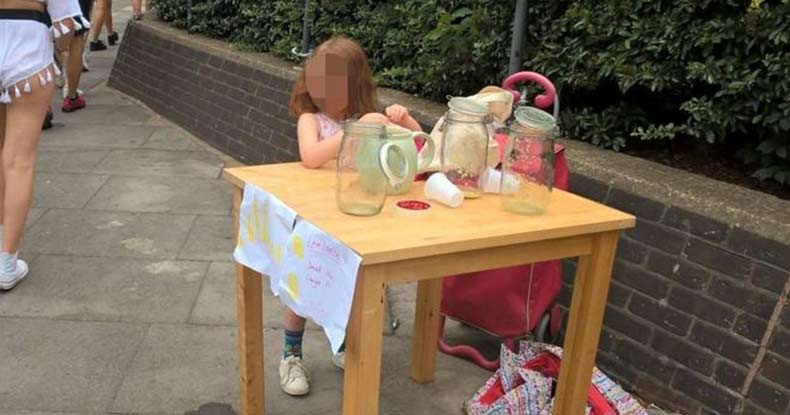 Common sense, among those who work inside the state, is a rare commodity. Agents of the state, like those who work in law enforcement, often become so blinded to reality by ‘just doing my job’ they throw logic and reason to the wayside, choosing authority and force instead. Nothing highlights this blind order following quite like police tormenting a five-year-old girl and issuing her a citation for the crime of selling lemonade without a permit.

“She just wanted to put a smile on people’s faces. She was really proud of herself,” Andre Spicer, the father of the five-year-old girl who all of the sudden found herself on the receiving end of the police state over the weekend.

Spicer told the BBC that his daughter set up a table and was selling lemonade in Mile End, east London, while thousands of music fans were on their way to the Lovebox Festival over the weekend.

She was in a prime spot and was making money, that is, until the coppers showed up.

Exactly how many police officers did it take to shut down a five-year-old’s lemonade stand?

As Spicer explains, “but after a small time trading, four enforcement officers walked over from the other side of the road.

“I was quite shocked. I thought that they would just tell us to pack up and go home.”

Instead of telling the five-year-old that she should not be selling lemonade without a permit — which would have been atrocious enough — these hero cops protected society by issuing her a fine for £150 (nearly $200 USD).

“But they turned on their mobile camera and began reading from a big script explaining that she did not have a trading license,” Spicer explained.

At this point, the girl became horrified at the four large officers standing over her, telling her she’d broken the law.

The sheer lack of humanity a person has to have to issue a $200 ticket to a five-year-old girl for selling squeezed lemons mixed with water to willing patrons is disturbing, to say the least.

All hope in humanity is not lost, however. Once Spicer spoke out about the ridiculous fine his daughter received, the city council eventually heard about it.

As BBC reported, a council spokesman said, “We are very sorry that this has happened. We expect our enforcement officers to show common sense and to use their powers sensibly. This clearly did not happen.”

Luckily, for the Spicer family, positive publicity is more valuable than the $200 fine to the city, so they chose to take the high road.

“The fine will be canceled immediately and we have contacted Mr. Spicer and his daughter to apologize,” the council spokesman said.

However, you can rest assured that if Spicer had not spoken out about this fine and, instead, simply chose not to pay it, a warrant would’ve been issued and force would’ve been escalated – for lemonade.

As NBC reports, in his column for The Telegraph, Spicer, a professor at the Cass School of Business at London’s City University, lamented all the rules, regulations and monitoring of children that goes on now — often stifling creativity, entrepreneurial spirit and the confidence gained by giving children a little independence.

“I think the wider issue here is a question about encouraging children to have a go at things, whether it’s starting a small business or putting on a play or whatever they want to do,” Spicer told ITV. “Children are under a lot of pressure these days and are often not encouraged to take risks.”

It’s turning out to be a hard and fast lesson in how government requirements on business – many of which play no role in protecting people or the environment – put a heavy, unnecessary burden on aspiring entrepreneurs like Spicer’s little girl’s lemonade stand. Revenue collection is often the only driver of government permits and licenses and this collection is enforced with police force.

Bearing down on the age-old tradition of youngsters setting up lemonade stands demonstrates how obsessed the State has become in “regulating” small business.

It appears that Spicer’s daughter made it through the gauntlet, with the help of publicity and social media. Others are not so fortunate, though.