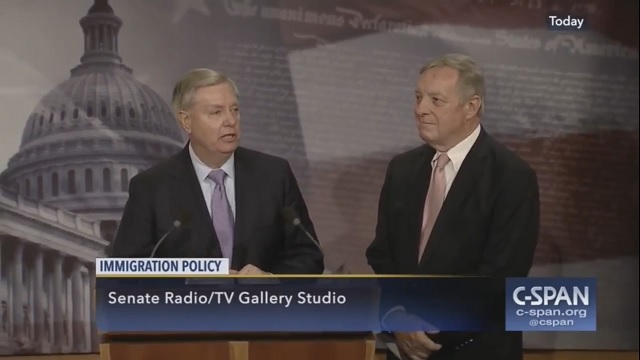 Republican Senator Lindsey Graham of South Carolina said Thursday that he does not want South Carolina residents who oppose giving citizenship to illegal immigrants to vote for him.

WASHINGTON — Sen. Lindsey Graham (R-S.C.) urged President Trump to support a revived DREAM Act and said at the “snap of his fingers” Trump could convince the Republican Party to unite behind providing a pathway to citizenship for all undocumented immigrants.

…Graham believes “most Republicans have zero problem” granting a pathway to citizenship for students who were brought to the U.S. illegally.

“To the people who object to this, I don’t want you to vote for me because I cannot serve you well. I just don’t see the upside of telling these kids they have to go back and live in the shadows or send them back to a country they have no idea about the country. If you send them back to their native country, some of them have never been there as anything other than a baby,” he said.

“So I just think most Americans would support President Trump if we could work out a plan to deal with these kids and secure the border. I think most Republicans would. So what have I done? I’ve stopped letting 30 percent of the people who are mad about immigration determine how I behave. To those who feel like you should deport these kids, boy, I couldn’t disagree with you more,” he added.

You heard the man. Do not give him your vote if you do not want to give citizenship to tens of millions of illegal immigrants, almost all of whom will vote Democrat and eliminate the chance anyone like Trump could ever get elected again.