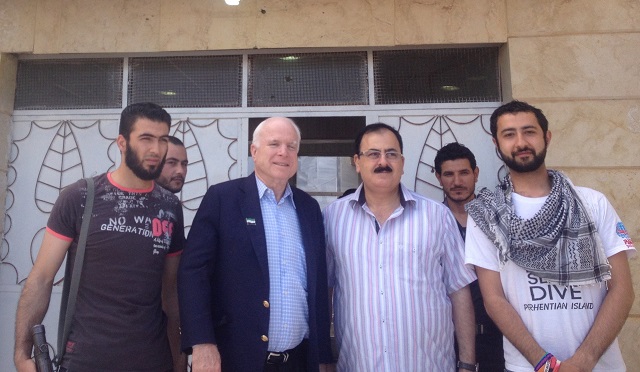 Brain cancer has not stopped John McCain from pursuing his number one passion in life: arming rebel terrorists.

McCain, or perhaps someone on his staff who is now controlling him à la “Weekend at Bernie’s,” took the time to tweet out an attack on President Trump Thursday afternoon for ending a CIA program which helped arm and train ISIS-aligned rebel terrorists in Syria seeking to overthrow the government of Syrian President Bashar al-Assad.

Here’s the statement he linked to on his website:

Washington, D.C. ­– U.S. Senator John McCain (R-AZ), Chairman of the Armed Services Committee, released the following statement today on reports that the administration is ending a program to assist the Syrian opposition:

“If these reports are true, the administration is playing right into the hands of Vladimir Putin. Making any concession to Russia, absent a broader strategy for Syria, is irresponsible and short-sighted. The administration has yet to articulate its vision for Syria beyond the defeat of ISIL, let alone a comprehensive approach to the Middle East. A key pillar of American strategy must be the removal of Assad from power as part of an end to the brutal conflict in Syria, which has fueled ISIL’s growth through its cruelty, extended malign Iranian influence, and undermined broader regional stability. Six months into this administration, there is still no new strategy for victory in Afghanistan either. It is now mid-July, when the administration promised to deliver that strategy to Congress, and we are still waiting.”

There is a “broader strategy,” it’s the one Trump outlined when he ran for president — the one everyone voted for. Let Assad stay in power and focus on defeating ISIS in collaboration with Russia. The administration has said they’ll look at taking Assad out of power after the war is over and ISIS is defeated.

All that said, it’s nice to see brain cancer has not stopped John McCain from doing what he loves.