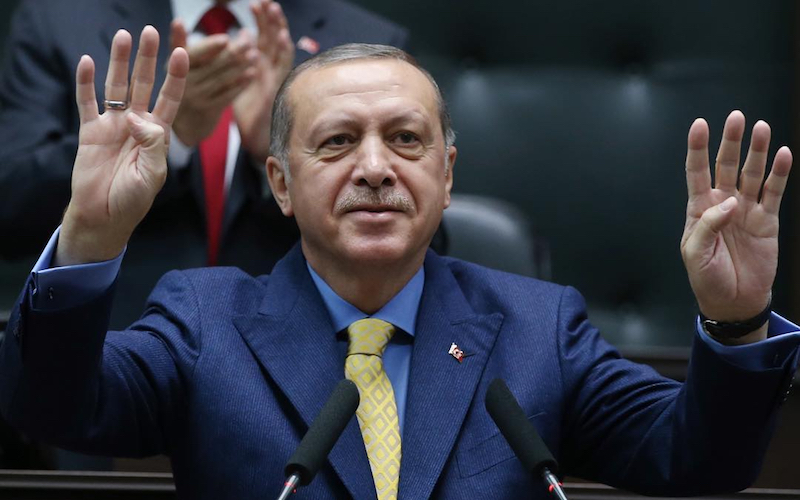 It is highly unusual for a NATO ally to reveal details of a U.S. military deployment during active operations in a war zone, but this is exactly what happened when Turkey spilled the beans on the U.S. revealing all their military locations in Syria.

The United States is not carrying out the wishes of NATO ally Turkey, which claims that U.S. support for the Kurdish rebels is contrary to Turkey’s national security. The U.S. is also operating without the permission of the Assad regime in Syria.

But the latest display of Turkish anger at U.S. policy in Syria divulging secret locations of 10 U.S. military bases and outposts in northern Syria where the U.S. is leading an operation to destroy ISIS in Raqa has gone too far. The list published by the Anadolu news agency pin-points all U.S. presence from one end to the other of the Kurdish self-administration region—a distance of more than 200 miles. It included disclosing the types of U.S military operations housing artillery batteries with high maneuverability, multi-barrel rocket launchers, various mobile equipment for intelligence, and armored vehicles for general patrols and security. The Anadolu news agency even listed the number of U.S. troops in several locations and in two instances stipulated the presence of French special forces including the number of U.S. Special Forces troops stationed at two of the outposts.

The West is living a deception when it comes to Turkey. While western media admits that Turkey’s democracy under Erdogan is dying they, also trumpet that such “brutal crackdown can’t last”.

So lets consider some facts. Today Turkey’s definition of terrorism is written contrary to any dictionary; a friend of Turkey is considered “non-terrorist” while all who disagree with Turkey’s policies are identified as “terrorist”. So terrorism is now defined as “anyone who defies Erdogan”.

Think about this for a minute. To Erdogan, the whole earth revolves around him and any opposition to this megalomaniac they are now ‘terrorist’. Terrorism is not defined when one blows up civilians but when one hurts Erdogan’s ego.

And just this weekend ceremonies marking the anniversary of 15 July in which Erdogan whipped up public support for punishing coup plotters with the death penalty and talked about “ripping the heads” off so-called traitors.

Yet the media is always hopeful that Erdogan’s iron-fist rule will soon come to an end. Media outlets got really excited when Turkey’s largest opposition party, the CHP, marched 280-mile walk from Ankara to Istanbul, calling it a “Justice March.”

Many even inflated the numbers where some claimed ‘one million’ marched to oppose Erdogan while others claimed ‘hundreds of thousands’ and others claimed it was ’40 thousand’. Reality was that the numbers were less than ten thousand. But when one views the pro-Erdogan July 15th rally it was nothing like anyone has seen, not even during Nazi Germany.

Over a decade ago the media thought that for Turkish democracy to flourish, there needed to be an emergence of a force strong enough to curb the power of the military. Erdoğan seemed, to western liberal observers, to be the answer.

And instead of pleasing the West, Erdoğan then initiated his non-secular policies in 2007 and in 2010, a constitutional referendum gave Erdoğan’s government more control over the judicial system. Since then we said that Erdogan is fulfilling Daniel and is changing “set laws” and prosecutors began prosecuting secular high-ranking officers in the military while Erdogan began to slowly change the constitution to extend his presidency permanently which spells out ‘Caliphate’.

And this idea is not far-fetched. In 2015 Abdurrahman Dilipak, a deep operative for the National Intelligence Organization (MİT), posing as a writer, stated in speech given to AKP members in Toronto, that by switching to an executive presidency from a parliamentary democracy, Mr. Erdoğan would assume the title of caliph.

And Erdoğan’s statements going back to 2014 he has aspired to become the next caliphate. A Caliph is a prophet ordained by Allah to provide just governance over all of Islam. The caliphate was abolished by the secularization of Turkey 99 years ago and one more year will commemorate a century with the Islamic world having no Caliph. Will Erdogan announce himself as Caliph next year remains to be seen.

Erdogan belongs to Naqshbandi order, a major Sunni Sufi order. In late October 2014, Erdoğan stated it was his “grand design to recreate the Ottoman caliphate with the help of the Sunni jihadist army.”

“Erdoğan used the image of the caliphate and traditional Islamic values to gain popularity in the Middle East, expecting to gain it all over the world,” observed Ali Vyacheslav Polosin, Deputy Director of the Fund for Support of Islamic Culture, Science and Education.

Mr. Polosin explained: “After Erdoğan became president he started positioning himself in image ads not only as the president of the Turkish Republic, but as a reader of the Quran, as though he radiates some nur, light. It is more an image of a caliph, a ruler of true believers, than the president of a republic, especially considering that Turkey has very great experience in this aspect. So the claims are not that groundless.”

At 94, Kadir Mısıroğlu, who has worked with Erdoğan since the 1980s, has been staunchly anti-secularist – his opinions dating back to the founder and first President of the Turkish Republic, Kemal Atatürk – claiming that Turkey’s incursions into Syria and Iraq will empower Mr. Erdoğan to resurrect the Ottoman Empire and declare the caliphate.

“In Saudi Arabia, Kuwait, other countries, the persona of Erdoğan is popular among Muslims and even ruling elites. That is why Turkey has its own game here,” opined Mujtaba Rahman, Europe practice head at Eurasia Group, and Julian Emanuel, in a Eurasia Risk 2015 analysis. A 2006 Gallup survey of Muslims living in Egypt, Morocco, Indonesia and Pakistan, two-thirds of respondents said they supported the goal of “unifying all Islamic countries” into a new caliphate.

While the media avoids stating the obvious, that the ’emperor has no clothes,’ pretty soon the whole world will recognize it when Erdogan puts on the Caliphate Diadem.

And this is exactly what Erdogan revealed when his victory was complete, the first thing Erdogan did was rush to the tomb of Selim I and unveiled the diadem (silk turban) which was positioned on the grave to signify the Ottoman resurrection from the dead.

Walid Shoebat is a former member of the Muslim Brotherhood who converted to Christianity, and author of the book, God’s War on Terror.