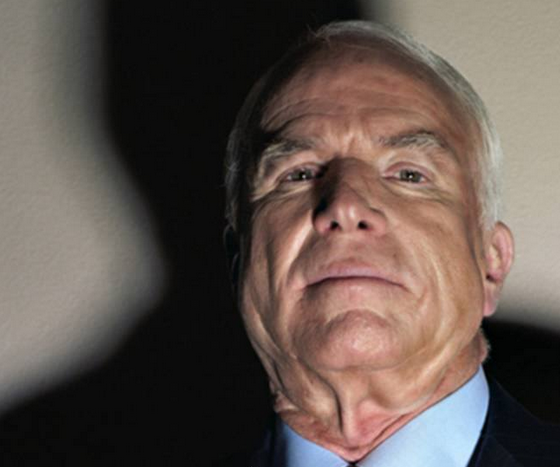 Or look at it another way: It’s God giving these three men one last chance to repent, before they must answer for their sins.

Nominally a Republican, McCain is a never-Trumper who gave the FBI the wholly fake “Russian prostitute golden shower” dossier on Trump, and actually said US leadership was stronger under Obama, when surveys found the military during the Obama administration to be plagued with low morale.

A warmonger (“neo-Con”) who has never met a war he doesn’t promote, McCain met with Syrian jihadists while going postal on Syrian Christians. He is loathed by military veterans for making political capital as a “war hero” when he “sang like a canary” to the VietCong and made a ‘Tokyo Rose’ propaganda recording. More unforgivable still are his tireless efforts to suppress information on America’s still-missing POWs.

On Wednesday, July 19, 2017, the Mayo Clinic in Phoenix said in a statement that McCain has the most common but aggressive type of brain cancer called glioblastoma. Without treatment, survival is typically 3 months; with maximum treatment, the cancer usually recurs, with fewer than 3% to 5% of patients surviving longer than five years.

Despite that, not only has McCain refused to resign, he also trashed President Trump’s decision to end the Obama administration’s irrational and counter-productive policy of the CIA arming and training Syrian jihadists.

F. Lee Bailey was one of O.J. Simpson’s four defense lawyers in Simpson’s trial for the 1994 murder of Nicole Simpson and Ron Goldman. (On Thursday, July 20, 2017, O.J. was given parole for his 2007 robbery of sports memorabilia and will be released from a Nevada prison this October.)

A famous criminal defense attorney, the 83-year-old Bailey is now flat broke, reduced to living with a hairstylist.

Last year, Bailey filed for bankruptcy after a string of scandals inside and outside the courtroom left him disbarred and shamed, including an accusation that he misappropriated funds from his defense of an alleged drug dealer.

Bailey’s lawyer pal, Alan Dershowitz — a friend of convicted millionaire pedophile Jeffrey Epstein who frequently flew in the latter’s private plane to Epstein’s pedo-island, as well as provided legal assistance to the pedophile — blames “the vindictive way” Bailey’s been treated on his defense of Simpson.

Bailey continues to insist that a Los Angeles jury had reached the correct verdict in acquitting Simpson of the murders. (SFGate)

The 80-year-old actor/comedian, accused by many women of rape and sexual assault, recently got off the hook when his trial for the 2004 sexual assault of Andrea Constand ended in a mistrial on June 17.

Not only has the prosecutor vowed to re-try Cosby, the National Enquirer reports that according to a source “close to Cosby,” the actor has senile dementia. The source says:

“Bill is showing signs of dementia. Some of his reasoning skills seem impaired. He’s been terribly forgetful and his normal behavior has changed. He’s doing strange things, like cutting a sandwich and eating it with a fork — and it’s not because of his vision. The problem is getting him to remember his lines, his own words. At some point, if his wife doesn’t step in — and right now that doesn’t seem like a real possibility — he’s going to need a caretaker, someone who is adept at handling a patient with dementia.”

Even Cosby’s attorney, Brian McMonagle is taken aback by his client’s impaired functioning.