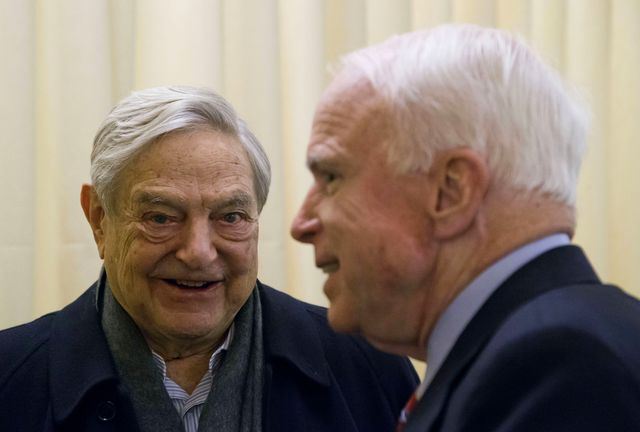 Sen. John McCain (RINO-AZ) has an eponymous foundation, the McCain Institute for International Leadership, that is less known and much smaller in scale, but rivals the Clinton Foundation in corruption.

Note: Don’t confuse the McCain Institute with either:

The Institute describes itself as a tax-exempt non-profit and “non-partisan do-tank dedicated to advancing character-driven global leadership based on security, economic opportunity, freedom and human dignity – in the United States and around the world.”

Reporting for The Daily Caller on June 19, 2017, Richard Pollock writes that the Institute began with $9 million left over from McCain’s failed 2008 presidential campaign, and has become a huge operation, featuring upwards of 80 people including dozens of full time staff and board members. Associated with Arizona State University, the McCain Institute has assets valued at $8.1 million.

So who exactly are McCain Institute donors?

A WikiLeaks tweet says the McCain Institute is funded by the Saudis:

The WikiLeaks tweet is corroborated by a Bloomberg report in 2016 on a $1 million Saudi Arabian donation to the institute, a contribution the McCain group has refused to explain publicly. (See “McCain cuts off questions about Saudi donation“)

Baxter Dmitry of YourNewsWire observes that the secretive $1 million donation from Saudi Arabia “looks suspiciously like a Clinton Foundation style pay-for-play ‘donation’” and explains why Sen. McCain has “certain ‘viewpoints’ about the Middle East, and keeps making secret trips to Syria.” Saudi Arabia, as well as Israel, are adamantly opposed to Syria’s Assad government and seek its overthrow by “rebels” who include Al Qaeda jihidasts.

More than that, according to the censored 28 pages of the 9/11 Commission’s report, the Saudi government was involved in the 9/11 attack. John F Lehman, a Republican member of the 9/11 commission, said:

“There was an awful lot of participation by Saudi individuals in supporting the hijackers, and some of those people worked in the Saudi government. Our report should never have been read as an exoneration of Saudi Arabia.”

The involvement of the Rothschilds goes beyond Lynn being an institute trustee.

John McCain has been accused of accepting improper campaign donations from the Rothschilds. U.S. political campaigns are forbidden from accepting contributions from foreign nationals.

According to the nonpartisan citizens’ watchdog group Judicial Watch (via The Guardian), in 2008 John McCain violated election laws by accepting campaign contributions from two non-U.S. nationals.

At issue is a fundraising luncheon held in March at London’s Spencer House during McCain’s swing through the United Kingdom. An invitation to the event lists Lord Rothschild and Nathaniel Rothschild as hosts, and indicates the event was made possible with their “kind permission”. Tickets to the luncheon cost $1,000 to $2,300.

Judicial Watch president Tom Fitton said: “The question is whether or not the Rothschilds paid for the event, the venue, the catering, or any other related costs.”

According to Richard Pollock of The Daily Caller, the McCain Institute has also “accepted contributions of as much as $100,000 from billionaire liberal activist-funder George Soros” and from Teneo, a for-profit “global strategies” company founded by a Clinton crony named Doug Band, who was Bill Clinton’s “bag man”. As Pollock puts it, “Teneo has long helped enrich [Bill] Clinton through lucrative speaking and business deals.”

Pollock says McCain and Soros became friends after the senator was exposed as a member of the “Keating Five” in the savings and loan (S&L) industry scandal that erupted during George H.W. Bush’s administration. As the S&L bank chairman, Charles Keating had paid $1.3 million to bribe five members of Congress, including McCain, to interfere with government regulators on behalf of the savings bank.

The experience so scarred McCain that he became a vigorous advocate of campaign finance reform and in the process reportedly became friends with Soros.

According to Pollock, the McCain Institute has also taken at least $100,000 in “donations” from OCP, S.A., a Moroccan state-owned phosphate company operating in Western Sahara which repeatedly has been accused of worker abuse and exploitation.

Morocco seized Western Sahara in 1975 and has since occupied the region by force in defiance of U.N. resolutions and legal declarations by other international bodies. Human rights groups, including the Robert F. Kennedy Center for Justice, say Morocco’s state-owned companies, including OCP, subject its workforce to gruesome conditions while exploiting Western Sahara’s natural resources, especially phosphate, Morocco’s “white gold” that is used to make fertilizer. The Western Sahara holds half of the world’s phosphate reserves.

The King of Morocco was also a major donor to the Clinton Foundation. Hillary Clinton personally accepted $12 million from the King in return for holding a CGI (the Clinton Foundation’s Clinton Global Initiative) regional meeting in Morocco. OCP, the Moroccan state-owned phosphate company that “donated” $100,000 to the McCain Institute, was a major sponsor of the CGI meeting, and Bill Clinton was the featured speaker.

McCain has lavished effusive praise on the King of Morocco, saying in 2011, that the country was a “positive example to governments across the Middle East and North Africa.”

Pollock reports that the McCain Institute has also accepted at least $100,000 from the pro-Iranian Pivotal Foundation, founded by Francis Najafi who owns the private equity and real estate firm Pivotal Group.

The Pivotal Foundation has in the last three years given $205,000 to the National Iranian-American Council (NIAC), which has been a vocal advocate for the Iranian nuclear deal the Obama administration negotiated. The NIAC describes itself as “a nonpartisan, nonprofit organization dedicated to strengthening the voice of Iranian Americans and promoting greater understanding between the American and Iranian people.” In other words, the NIAC act as Iran’s lobbyists in Washington, although it has neither registered as a lobbyist with Congress, nor filed as a foreign agent under the Foreign Agents Registration Act.

Indeed, NIAC President Trita Parsi has long been a lobbyist for Iran:

Pollock says the McCain Institute did not respond to requests for the dollar amounts of its high donors, when the donations were made and if there were strings attached to the contributions, claiming it did not have any of the information.

For his part, Sen. McCain professed he has no involvement with his own institute that is named after him, saying “I’m proud that the institute is named after me, but I have nothing to do with it” — which stretches credulity.

The institute’s donations from governments like Saudi Arabia and Morocco raise legitimate questions of pay-for-play. They also contradict McCain’s vision of human rights and national security.

How the McCain Institute spends its millions also raises questions.

The only problem is every penny of the $2.5 million went to the Arizona State University Foundation that “does not appear to have anything whatsoever to do with human trafficking.”