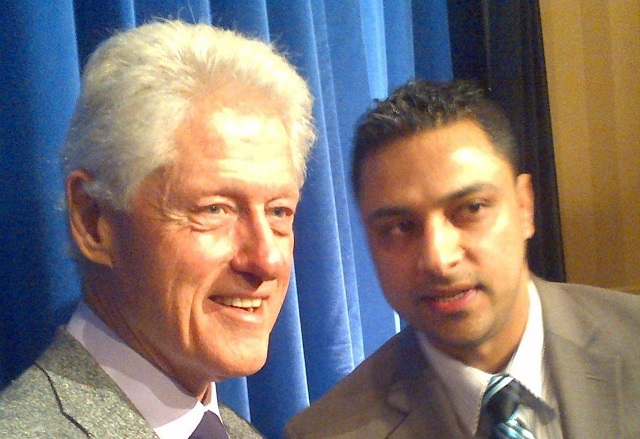 Pakistani foreign national Imran Awan, who was hired by Debbie Wasserman Schultz and other Democrats to be their IT guy, is currently under criminal investigation and reportedly is suspected of blackmailing many of them, among a host of other crimes.

The Daily Caller reported Sunday night that the FBI recovered a host of smashed hard drives and other computer equipment from his home.

FBI agents seized smashed computer hard drives from the home of Florida Democratic Rep. Debbie Wasserman Schultz’s information technology (IT) administrator, according to an individual who was interviewed by Bureau investigators in the case and a high level congressional source.

Pakistani-born Imran Awan, long-time right-hand IT aide to the former Democratic National Committee (DNC) Chairwoman, has since desperately tried to get the hard drives back, the individual told The Daily Caller News Foundation’s Investigative Group.

The congressional source, speaking on condition of anonymity because of the sensitivity of the probe, confirmed that the FBI has joined what Politicopreviously described as a Capitol Police criminal probe into “serious, potentially illegal, violations on the House IT network” by Imran and three of his relatives, who had access to the emails and files of the more than two dozen House Democrats who employed them on a part-time basis.

Awan’s younger brothers, Abid and Jamal, his wife, Hina Alvi, and Rao Abbas, Imran’s best friend, are also under investigation. There have been no arrests in the case.

…Shortly after the criminal probe was revealed in February, Imran abruptly moved out of his longtime home on Hawkshead Drive in Lorton, Va., and listed it for rent on a website that connects landlords with military families.

One of new tenants — a Marine Corps veteran married to a female Navy Officer — said he found “wireless routers, hard drives that look like they tried to destroy, laptops, [and] a lot of brand new expensive toner.”

The tenants called the Naval Criminal Investigative Service, and not long after, FBI agents arrived together with the Capitol Police to interview them and confiscate the equipment. The Marine spoke on condition of anonymity because of concerns for his wife’s naval career, saying she doesn’t want to be associated with a national security incident.

“It was in the garage. They recycled cabinets and lined them along the walls. They left in a huge hurry,” the Marine said. “It looks like government-issued equipment. We turned that stuff over.”

Wasserman Schultz resigned as DNC chief in July 2016 after the committee’s IT system was hacked. She has since refused to fire Imran despite learning that he is a target of a criminal investigation.

The Marine said Imran wanted the hard drives back so desperately that he threatened to sue the renter for stealing them.

“It was unbelievable. I don’t know where they get off thinking they’re going to sue us for items we have no obligation to hold onto,” he said.

Imran came to the house for the items “three to four times,” but the Marine wouldn’t let him enter.

“Their lawyer contacted us today via email and said we owed $350 in late charges and the items he left in the house,” the Marine said.

The Marine heard about the House investigation on the radio, and by that time, he had noticed other bizarre signs of desperation from his landlord.

“When we first moved in, a mailman came with certified mail from the House of Representatives. We were trying to be nice and signed for it. They lost their shit, saying ‘why did you sign for it, this is illegal!’ It was certified from the [Chief Administrative Officer of the House],” he said.

This story literally has everything. Mystery, intrigue, foreign nationals spying, political corruption, blackmail and more. Think of all the dirt this guy could have on these Democrats!

Seth Rich, who really hacked the DNC, the manufacturing of this fake Russia narrative, the conspiracy to take down Bernie Sanders and hand the nomination to Hillary Clinton, more emails showing how Hillary Clinton cheated during the debates, the list goes on and on.

This story is a thousand times more interesting than fake conspiracies about Russia. If the media were to focus on it, it would captivate the mind of the entire nation. Instead, they’re completely ignoring it and just hoping it goes away.