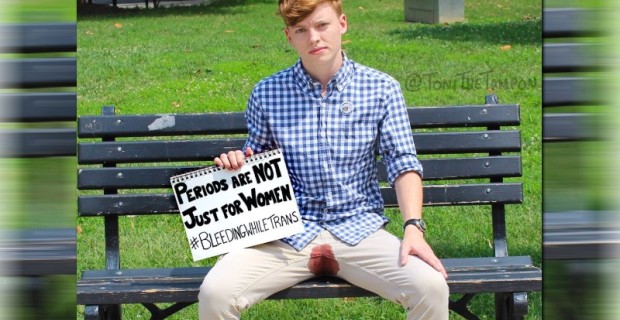 An absurd joke that started off as a 4chan troll – the depiction of women openly displaying their period-stained pants in the name of social justice – has actually been adopted for real by the left.

“Free-bleeding,” the practice of avoiding feminine hygiene products because they are an oppressive tool of the “patriarchy” and part of male “period-shaming,” began life as a hoax created by members of the notorious 4chan message board back in 2014.

4chan pranksters attempted to troll feminists by convincing them that displaying their period-sodden pants was making a stand for women’s liberation.

Over the course of the next 12 months, numerous progressives fell for it completely, embracing the sight of blood-soaked crotches as a social justice cause.

Fast forward to last week, when “transgender artist” Cass Clemmer, a biological female, posted a picture of him/herself wearing blood-stained pants while holding a sign that read, “Periods are not just for women. #BleedingWhileTrans.”

The Huffington Post celebrated the image by declaring it to be a “powerful attempt to broaden the cultural understanding of the different types of people who experience menstruation.”

According to HuffPo, the photo proves that “women aren’t the only ones who get periods.”

Given that this photo shows a woman having a period, it kind of proves that women are the only ones who can have periods @HuffPost pic.twitter.com/WCkz3ZO4Vd

Given the fact that the individual in the photo is a woman and that there are only two genders (reference; science), yes it does prove exactly that.

The photo was also lauded by numerous other leftist publications like the Independent, Mashable, and Allure.

The phenomenon is akin Poe’s law in reverse.

Poe’s law states that “it is impossible to create a parody of extreme views so obviously exaggerated that it cannot be mistaken by some readers or viewers as a sincere expression of the parodied views.”

Only this time around, the left has actually embraced the parody and turned it into a genuine claim that women, and transgender biological males who identify as women, are oppressed because society thinks period stains are disgusting.

Oh yeah, and there are only two genders. That’s science. Deal with it.