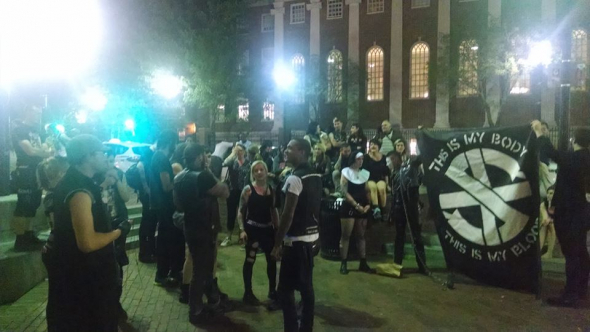 It is no surprise that the LGBT brags about demons or the devil, because homosexuality is a vile sin. However, according to a recent statement from a major Satanist group, they have confirmed that a large number of their members are in fact LGBT:

The co-founder of the Satanic Temple said that he would “not be surprised” if over half of the group’s members identify as LGBTQ because of its “radically-inclusive space.”

“We don’t have strict separations or definitions of our gay membership, our trans membership, or anybody else,” Lucien Greaves said in an article for Vice published on Monday.

Still, Greaves offered that “he wouldn’t be surprised if more than half identify as such.”

Vice described the Satanic Temple as a “platform for LGBTQ members to celebrate their identities,” and suggested that they are drawn by the “radically-inclusive space for people who identify in all sorts of ways.”

Greaves explained in previous interviews that the Satanic Temple’s members do not believe in Satan and God as literal beings, but view Satan as a “metaphorical construct” of rebellion.

As Ash Astaroth, who is now the director of the Temple’s headquarters in Salem, Massachusetts, said in the Vice article:

Previous polls have shown a strong link between LGBT and non-religious identification, as well as heavy support from atheists and agnostics for LGBT concerns.

A 2014 Pew Forum survey found that 94 percent of both atheists and agnostics said that homosexuality should be accepted by society, which was more than any other group in America.

A separate 2013 Pew poll found that LGBT adults are less religious than the general public, with nearly half, or 48 percent, stating that they have no religious affiliation. What is more, three-in-ten LGBT adults said that they have been made to feel unwelcome in a place of worship.

The Satanic Temple found itself in the center of controversy earlier in July following mass Christian protests in Belle Plaine, Minnesota, over a planned Satanic monument meant to honor veterans.

Over a hundred Christians came out for a prayer-filled rally at Veteran’s Memorial Park, holding signs such as “Satan takes souls to hell for eternity.”

Local Roman Catholic clergy also spoke out against the monument, which was planned as a 23-inch by 23-inch black steel cube inscribed with inverted pentagrams.

“Sometimes these things which are evil can really, maybe, wake some people up. We really have to take our faith seriously and live it,” said Fr. Brian Lynch, pastor of Our Lady of the Prairie parish.

“It feels like it’s being imposed on us from the outside,” Lynch added.

The Belle Plaine City Council later decided to eliminate the Free Speech Zone at the park that would have hosted the Satanic monument and other religious monuments. A statue of a soldier kneeling before a Christian cross and grave was subsequently removed. (source)

People get angry at us because we have a hatred of the LGBT, and the reason is right here. We love God, and the LGBT overwhelmingly hates God. They show this through their actions. If you want to love God, then as Jesus said, you will keep God’s commandments. Therefore, to love God is to love what God loves and to hate what God hates. The LGBT hates God, so they love what God hates and hate what God loves. That is why we say what we say, and to that we have the backing of the words of men and women who, for their love of God, have written for centuries about this and explained this very fact that until recent times was obvious- if you want to love as God loves, you need to hate as God hates:

This is why God hates sin- because it is perverted and perverting, distorting not only the object or behavior but also the person who participates in it. It is why sin is so serious an offense against God, because if as Christians the purpose of our existence, as the Baltimore Catechism so wonderfully states is to know, love, and serve God, and to be content with Him in this life and eternally happy with Him in the next, it is incumbent for our salvation that we root out all that does not reflect God in us and become as much like Him as we can with each action. Indeed, God wants this not only because it brings Him honor, but more importantly because of His love for us, since if God created us a certain way for a certain end, which must be love, than the only way we can truly love God and ultimately be happy with ourselves and Him is to become the men we were created to be. Sin distorts and destroys that perfection, and it sets up obstacles to salvation that if not managed and removed can cast a man into hell.

This hatred is a holy hatred that runs from God’s grace because it is a hatred of sin. That said, you will almost never hear Christians today talk about hatred at all as holy because they have been so taught that all hatred is evil. Now most hatred is truly unrighteous- a perversion of God’s love- and as such that is correctly called evil. But to say that all hatred is evil is an evil is because it is an indirect rejection of God’s love and even an affront to it because it gives a metaphysical equivalency to hatred with good- if nothing can be hated, then all must be called good or at least, morally neutral- and this is simply not true. Good exists, and evil exists, and evil is to be hated as good is to be loved. Indeed, if Christians do not hate, they place their souls in a state of potential danger, for they will inevitably call evil good and good evil. (source)

How much simpler can this be made? The reason that God destroyed Sodom and Gomorrah was because they hated God and refused to repent. Therefore, by rejecting the mercy of God, they by necessity chose His justice, and it is a fearful thing to fall into the hands of the living God, in whose eyes we are nothing.

God is Love, and as such, He is Mercy and Justice. There is no other standard because He IS THE standard.

We do not want the justice of God to fall upon society simply for the fact that as Jesus says in the Bible, He makes the rain to fall on the good and on the evil, so will God’s justice fall over all people regardless of who invites it. If one looks at this as a sickness, then in God’s eyes and per the words of the saints the LGBT is a festering wound that is poisoning society and sucking the life out of it because as the demon worshippers themselves admit, they are overwhelmingly pro-LGBT and filled with LGBT supporters.

There is a reason why the LGBT are obsessed with demons and the ghoulish- because they worship them. The LGBT loves the devil and all of his evil. These people WORSHIP EVERYTHING THAT IS FOUL AND DISGUSTING IN THIS WORLD. If that is not enough to give you pause to think, I do not know what else would.

Yet this is what the LGBT wants to forcibly pour into your soul.

Anybody who calls himself a “Christian” while supporting the LGBT is either a fool who does not know what his own religion teaches, or is a liar and a deceiver attempting to serve two masters, and as Jesus Himself said, no man can have two masters because he will hate one and love the other.

The choice is clear- it is Christ or the devil.