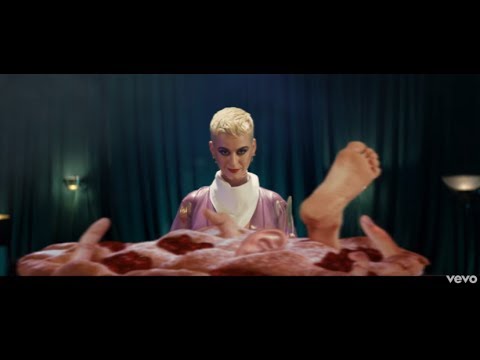 The devil likes nothing more than to strip us, whom God made in His own image, of our humanity. And there’s nothing more dehumanizing of oneself and the other than to commit cannibalism — the ingestion of humans by humans.

And yet, cannibalism has become a meme — an idea, behavior, style, or usage that spreads from person to person within a culture — in contemporary America’s sick culture.

More than 4 months ago in my post, “What’s behind pop culture’s enthrallment with cannibalism?,” I listed some of the signs:

Add to the above list pop singer and Hillary Clinton acolyte Katy Perry (real name: Katheryn Hudson), 32 — she who openly testified that she had sold her soul to the Devil. (Note in the video below the interviewer’s upside-down cross earrings.)

The music video of Perry’s latest single, “Bon Appétit,” released in April 2017, is a macabre step-by-step cooking recipe featuring the singer as the main course. The video ends with Perry about to dine from a plate full of human body parts.

Blogger Truthearth draws our attention to Katy Perry’s live performance of “Bon Appétit” on Saturday Night Live, when she assumed the “Arch of Hysteria” — the pose that cannibal serial killer Jeffrey Dahmer had put one of his victims.

Dahmer’s sick pose was reproduced by the late French-American “artist” Louise Bourgeois (1911-2010) as “The Arch of Hysteria” — a sculpture owned by Tony and Heather Podesta, which they displayed in their Falls Church home.

Before it burned down in a hellish inferno last December, the “Ghost Ship” warehouse in Oakland, California, had held an evening performance “art” event in which the “artist” assumed the Arch of Hysteria pose (see “Oakland warehouse fire: Satan’s Hell House“).