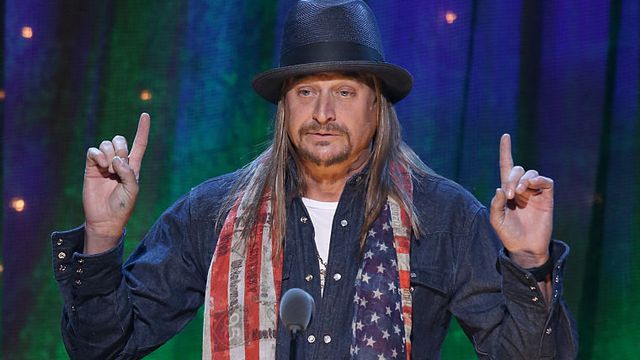 Is Michigan ready for Senator Kid Rock? (Actually, his real name is Robert Ritchie, but wouldn’t it just be better if we all called him Senator Rock?)

If there are Michiganders who aren’t yet prepared for the eventuality of Senator Kid Rock… they better get used to it soon.

New polling firm Delphi Analytics just released its first poll of the possible upcoming Michigan Senate race and it has some very worrisome information for Democrat incumbent Debbie Stabenow (D-MI). The poll finds that while a plurality of Michiganders aren’t sure who they’ll support in the upcoming Senate race, Kid Rock is currently leading among those who know which way they’ll vote.

To gauge Ritchie’s chances in a hypothetical general election matchup, Delphi Analytica conducted a poll from July 14-18 of 668 Michigan residents. Of respondents who stated a preference between Debbie Stabenow and Robert Ritchie, 54% stated they would vote for Ritchie while 46% said they would vote for Debbie Stabenow. These results could indicate that Ritchie is a popular figure in Michigan, Debbie Stabenow is unpopular, or some combination of concurrent trends. The relatively large, 44%, number of undecided respondents may be due to the early stages of the campaign.

Many pundits still believe that Kid Rock is likely just showing off in an attempt to gin up publicity for his music career, but the musician himself says he’s serious.

I have had a ton of emails and texts asking me if this website is real… https://t.co/RRVgISDFeq The answer is an absolute YES. pic.twitter.com/uYCUg6mjW1

However, you don’t just have to take Kid Rock’s word for it. The musician has long been an advocate for Michigan’s industries and people. He has started several small business in the Detroit area and he has poured millions of his own dollars back into the local economy. When he speaks with media about the ongoing business renaissance that is currently taking place under Michigan’s GOP leadership, he beams with pride and he encourages entrepreneurship and innovation.

Long before Kid Rock announced the possibility that he might run for political office he was already acting like he was seriously considering one day holding office. See his charitable efforts in Michigan dating back more than a decade – here, here, and here.

Kid Rock hasn’t had much musical success lately and the announcement coincides with new music he’s released. Politico reminds its readers “that theory doesn’t appear consistent with the man himself.” The article continued:

Ritchie, who already boasts a huge and devoted following, has sold tens of millions of albums and amassed what he calls “fuck you money”—enough of it, in fact, that he has given seven-figure sums to charity and capped ticket prices to his concerts at $20 to make them accessible to working-class fans. Meanwhile, he’s earned a reputation in his native southeast Michigan as someone who is earnest when it comes to civic involvement, helping local businesses and headlining major philanthropic events. When Mitt Romney asked for his endorsement ahead of the pivotal Michigan primary in 2012, Ritchie invited him to his Metro Detroit home and peppered him with a list of policy questions, sleeping on the decision before informing Romney the next day he would support him. The two forged an unexpected bond: Romney adopted the patriotic rock anthem “Born Free” as his official campaign song, and Ritchie later praised the former Massachusetts governor as “the most decent motherfucker I’ve ever met in my life.”

He even has D.C. politicians already considering what might happen if Kid Rock runs for office:

.@SenFranken on the prospect of Kid Rock vs. Debbie Stabenow for US Senate in Michigan. #CNNsotu https://t.co/bGApXxxk3K

When Debbie Stabenow (D-MI) was first elected to the Senate from Michigan the state looked far different than it does now. Michigan used to be a solidly blue state that the Democrat Party could rely on from election to election. However, as Democrat policies destroyed the state’s economy and ruined it’s long history of manufacturing excellence the voters in Michigan began turning to the GOP. Fortunately, the GOP’s conservative policies have reignited the state’s economic engine and Michigan is back on the upswing and the voters have been rewarding the GOP with their votes. In fact, the GOP now holds strong majorities in Michigan’s House and Senate, and the Governor is also a Republican. In 2016, Michigan narrowly voted for President Donald Trump and was the last straw in ending Hillary Clinton’s hopes for the White House.

The point is… Debbie Stabenow may be facing an uphill battle no matter which GOP candidate she faces, but Kid Rock could prove to be an almost insurmountable foe.

He’s already started hammering Stabenow for being a tool for the Leftist Democrat establishment.

Dinner time at my house. What do you think Schumer is spoon-feeding Stabenow tonight? pic.twitter.com/gomKgqBV2l

I'm the living proof
With the gift of gab
From the city of truth. pic.twitter.com/G1q4wIZ2jg

To learn more about Kid Rock’s campaign for the Senate visit his campaign website – http://www.kidrockforsenate.com/