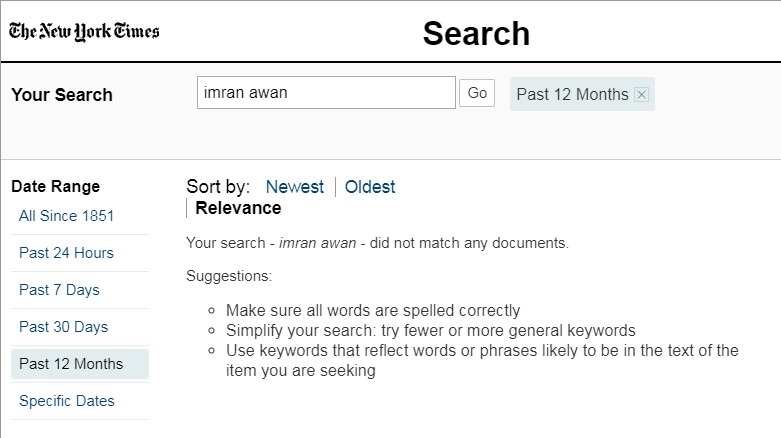 The FBI’s arrest of Debbie Wasserman Schultz’s IT aide Imran Awan as he attempted to flee the country for Pakistan was one of the biggest stories on the internet yesterday, but NBC, CBS, and NBC completely ignored it.

Awan was caught attempting to flee the US on Monday night and transfer around $300,000 to two individuals in Pakistan after an investigation by The Daily Caller found the FBI seized a host of smashed up hard drives from his home.

The story was picked up by Fox News, Politico, The Hill, The New York Post and several others.

From NewsBusters, “Networks Cover Up Wasserman Schultz’s Shady IT Staffer Being Arrested, Fired”:

Late Tuesday afternoon, it was announced that Democratic Congresswoman Debbie Wasserman Schultz (Fl.) had fired shady I.T. staffer Imran Awan after being arrested trying to flee the country amid a criminal investigation. And yet the “big three” networks ignored this piece of breaking news.

[…] we have a shady I.T. staffer and his family running a firm that possibly compromised the e-mails and files for a number of key congressional Democrats. To the casual observer, that would probably strike them as disturbing.

If that wasn’t enough, The Daily Caller’s intrepid work revealed that, among other bombshells, Awan and his brother “secretly took” $100,000 of Iraqi money, “owned money to Hezbollah-connected fugitive,” fetched $4 million from Democrats, and had access to DNC e-mails.

Despite all this, ABC, CBS, and NBC haven’t shown interest in this story, according to a Nexis search of Imran Awan and Wasserman Schultz.

Instead, ABC’s World News Tonight covered a brawl between a Delta Airlines pilot and flight attendant. Really earth shattering news, ABC. On CBS, interim anchor Anthony Mason gave a news brief to a rare Andy Warhol painting that could be worth millions being discovered inside a storage unit belonging to rock star Alice Cooper.

NBC Nightly News decided to pass on this Democratic scandal to instead push a Harvard Business School study that proved money could indeed buy happiness.

As NewsBusters notes, Fox News did cover the story. A search for “Imran Awan” shows they’ve never even mentioned his name once in a single article.

The Washington Post felt the story only merited one paragraph towards the very bottom of a huge “super article” covering the news of the day.