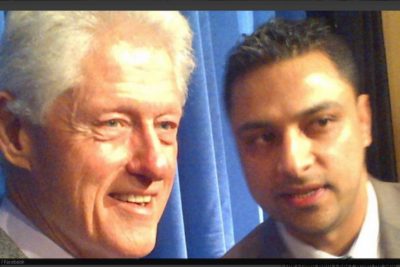 After engaging in numerous security violations over the years, former DNC chair Debbie Wasserman Schultz admitted to it, which then led to an investigation into her information technology (IT). Following the FBI seizing several smashed hard drives from his home, Imran Awan was arrested while he tried to flee the country to Qatar and then Pakistan after wiring $283,000 from the Congressional Federal Credit Union to that country. Now, House Minority Leader Nancy Pelosi (D) and both Bill and Hillary Clinton are coming into the mix of the Muslim IT spy scandal.

The Daily Caller reports, “Chris Gowen, Imran Awan’s lawyer, is a long-time campaigner for former President Bill Clinton and former Secretary of State Hillary Clinton and a member of an attorney team that brought a fraudulent lawsuit against energy giant Chevron.”

Apparently, the Democrats have paid at least $4 million since 2009 into this Muslim IT spy ring called the Awan group.

Imran Awan had been under investigation for stealing classified intel, potentially blackmailing house members and various other data breaches.

Among those in political office who employed the services of the Awans are at least 23 current and former Democrats in Congress. Here’s the list:

Of course, you probably recognize many of these names as the usual suspects when it comes to corruption and treason in the Democrat Party.

Following Awan’s arrest this week, Wikileaks’s Julian Assange pointed out the link between Awan and Nancy Pelosi by pointing to a May 2016 email. Here’s the text.

Pelosi is doing s closed door meeting. No staff or anyone allowed. Kaitlyn come to Rayburn room and get her iPad for Imran. Thanks.

Tracie and Kate I will call Kate. Conf in Tracie

Note that Awan had access to Pelosi’s iPad, as well.

What all do these treasonous Democrats know and how are they aiding these Muslim spies? Who knows. They could just be completely ignorant and in it for political gain or money or power… or they could know exactly what they are doing.

Either way, it looks as if this IT scandal goes all the way to the top in the DNC.

Instead of the media parroting the fake news narrative about Russian collusion, they should be reporting on this story as it is not only documented, but has great ramifications for national security. We can safely say the mainstream media are colluding with the enemies of America. They are not the press. They are the propaganda machine.