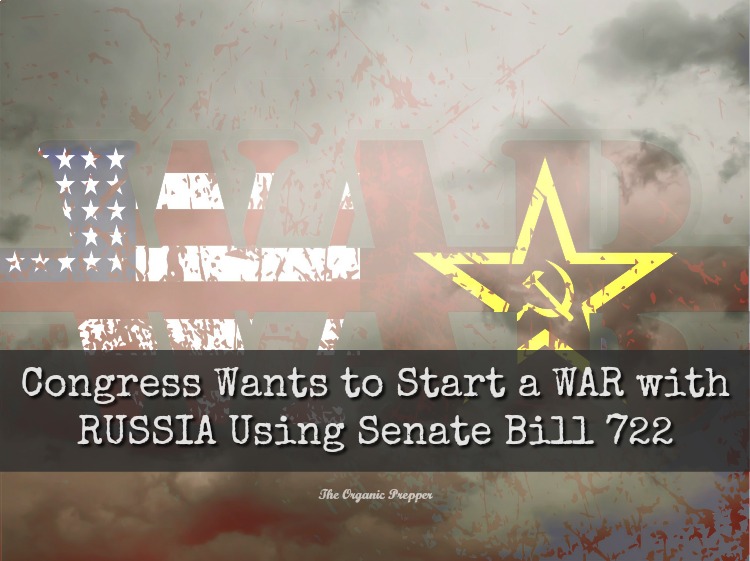 Would the new bill that the Senate has quietly passed actually remove executive powers from the President and start a war with Russia?

Our US Congress is filled with criminals, liars, people with serious health problems that could impair their judgment, and lifers with all the signs of advancing dementia, and yet these people are making decisions that could mean the difference between life and death for the rest of us while completely circumventing the checks and balances put in place by the Constitution.

A bill called “Countering Iran’s Destabilizing Activities Act of 2017” is, unsurprisingly, inaccurately named. (Aren’t all of the most powerful bills? I mean, the Patriot Act was anything but patriotic.)

Really, it’s all about Russia and disabling the Executive Branch.

80% of the bill has absolutely nothing to do with Iran, but instead, focuses on Russia. It removes many executive powers from the President and gives them to Congress. In effect, it ties Trump’s hands with regard to foreign policy by forcing him to abide by Executive Orders signed by Obama. If enacted, this would completely destroy our relationship with Russia.

The bill would enforce sanctions on Russia from executive orders that were signed by President Obama in 2017.

It is the sense of Congress that the Secretary of the Treasury and the Secretary of State should continue to implement Executive Order 13382 (50 U.S.C. 1701 note; relating to blocking property of weapons of mass destruction delivery system proliferators and their supporters). (source)

Also see Section 211 for all of the details of the sanctions this bill (remember, this is all about Iran) would impose on Russia, including the mandatory imposition of a number of President Obama’s Executive orders (section 222), cybersanctions against Russia cannot be waived by the President without permission from Congress (section 224c), and sanctions against anyone who supplies goods, services, technology, or information that benefits the Russian infrastructure (sections 232-233). These sanctions would destroy Russia’s railways, oil, and mining sectors and cause economic havoc within the country. They’d destroy any company in the world that supported Russia’s state-owned energy interests in any way.

Here’s a video by Anonymous with more information.

The bill was passed in the Senate by a vote of 98-2. Senator Rand Paul (R-KY) and Senator Bernie Sanders (I- VT) were the only dissenting votes.

Do you honestly think Russian President Vladimir Putin will just sit there and watch the economic destruction of his country without retaliation?

War with Russia is not the way we want to go. In my World War 3 series, I speculated about an offshore conflict and a mainland conflict, as well as the shortages and other effects that we’d facedue to such a catastrophe.

If you aren’t yet prepped, this new legislation should light a fire under any sensible person.

Our Congress is desperate for war with Russia.

Many of our members of Congress have been adamant about war with Russia, despite the fact that Trump and Putin have worked affably with one another thus far.  As I wrote shortly after the election:

As we all learned in General Smedley Butler’s classic, War Is a Racket, politicians love war. War makes lots of money for the military-industrial complex, and in turn, many politicians leave office with their bank accounts filled with blood money.

Several politicians have voiced their strong disapproval of the improved relations between Trump and Putin, vowing to “rein in” the potential for an agreement. If Trump continues on this current peaceful route, Congress seems to be indicating they’ll act on their own.

Unbelievable, right? Here are a few choice quotes from an article on The Hill. Note that they came from both Democrats and Republicans.

Sen. Lindsey Graham (R-S.C.) plans to be “a bit of a hard ass…We cannot sit on the sidelines as a party and let allegations against a foreign government interfering in our election process go unanswered because it may have been beneficial to our case for the moment.”

…Sen. John McCain (R-Ariz.):  “We should place as much faith in such statements as any other made by a former KGB agent who has plunged his country into tyranny, murdered his political opponents, invaded his neighbors, threatened America’s allies and attempted to undermine America’s elections.”

…Rep. Adam Schiff (D-Calif.): “I am deeply concerned about his [Michael Flynn’s] views on Russia, which over the last 12 months have demonstrated the same fondness for the autocratic and belligerent Kremlin which animate President-elect Trump’s praise of Vladimir Putin.”

Sen. Ben Cardin (D-Md.): “There are Democrats and Republicans that are, I think most members of Congress, that are very concerned about Russia’s activities and how we try to reconcile that with statements that Donald Trump made during the course of his campaign.”

One has to wonder whether there’s a distinct money trail in there some place. (source)

The key there? “If Trump continues on this current peaceful route, Congress seems to be indicating they’ll act on their own.”