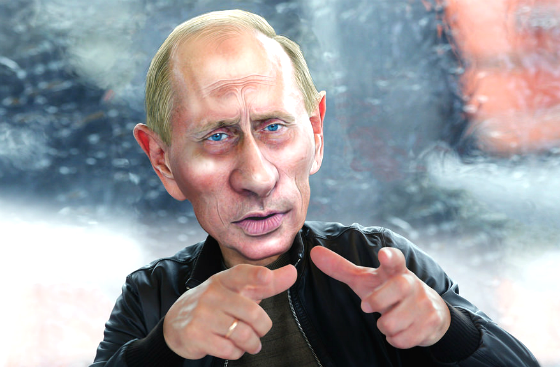 Considering the return of the Red Scare of late, that the man worth an estimated $200 billion might be deleted from the world’s wealthiest shortlist, perhaps makes sense — because he’s no other than the President of Russia and hauntingly keen investor, himself, Vladimir Putin.

Bezos’ stunning empire, including a $600 million deal between Amazon and the CIA in 2013 — notably, the same year the Amazon founder and CEO purchased the Washington Post — certainly impresses as a personal fortune, by just about any measure.

But Putin’s doubles it.

“I believe he is worth $200 billion,” Bill Browder, CEO of Hermitage Capital Management, told the U.S. Senate Judiciary Committee, reportsNewsweek.

“And Browder should know,” the report continues. “The financier, whose company was once the largest portfolio investor in Russia, famously retained Russian lawyer Sergei Magnitsky to investigate corruption, and in 2008 the lawyer uncovered a $230 million tax fraud that implicated Russian officials in a cover up. Russian authorities jailed Magnitsky shortly after the discovery and he died in prison a year later.”

Tales of corruption in Russian politics — whether true, embellished, or fabricated — allege Putin’s fortune might have been amassed entirely legally, but Browder insists the geopolitical-chess grandmaster garnered the bulk of the rumored fortune in a covert business deal with plutocrats among Russia’s upper echelons in the early 2000s.

“Putin was originally fighting with the oligarchs when he first came to power,” Browder testified, which, as Newsweek points out, alluded also to the 2003 imprisonment of one of Russia’s richest men, Mikhail Khodorkovsky. “When you go on trial in Moscow there’s a 99.7 percent conviction rate so they put you in a cage because there’s no presumption of innocence.

“Now imagine you’re the 17th richest man in Russia and you see the richest guy, far smarter, far more powerful than you, sitting in a cage, what is your reaction to that? You don’t want to sit in a cage.”

Eyeing the distinct possibility of future prison time, oligarchs turned to Putin for reprieve, asking, as Browder elaborated for Senator Sheldon Whitehouse, “What do we have to do to not sit in that cage?”

In response to what was seen by the U.S. to be the deadly endeavor to keep corruption under wraps, the U.S. passed the Magnitsky Act in 2012 — imposing sanctions against the officials perceived responsible — in what observers surmise imparted a direct blow to Putin, as “they hold his money for him.”

“The purpose of the Putin regime has been to commit terrible crimes in order to get that money, and he doesn’t want to lose that money by having it frozen,” Browder posited. “So he is personally at risk of the Magnitsky Act.”

Browder believes significant portions of the Russian president’s fortune rests in American banks, where it will languish without the repeal of the Magnitsky Act, an obstacle he theorizes explains that push by Russian attorney, Natalia Veselnitskaya — who met with Donald Trump, Jr., during the elder’s bid for the presidency.

As Voice of America reports,

“Browder testified that Kremlin-linked Natalia Veselnitskaya was the ‘family lawyer’ for the Russian family that owns Prevezon Holdings Ltd., the target of a $230 million fraud and money-laundering case that Magnitsky had exposed.

Whether or not Putin’s moves two decades ago reaped the storied rewards Browder claims may never be truly known — like any other politician, it’s suspected the leader of the ‘other’ world power nation might engage in creative record-keeping to secret a portion of the stash.

With sizable monies effectively locked in American banks, the cagey leader’s fortune still manages to surpass the riches ferreted away by Bezos and Gates — an accomplishment, these days, of mixed acclaim.