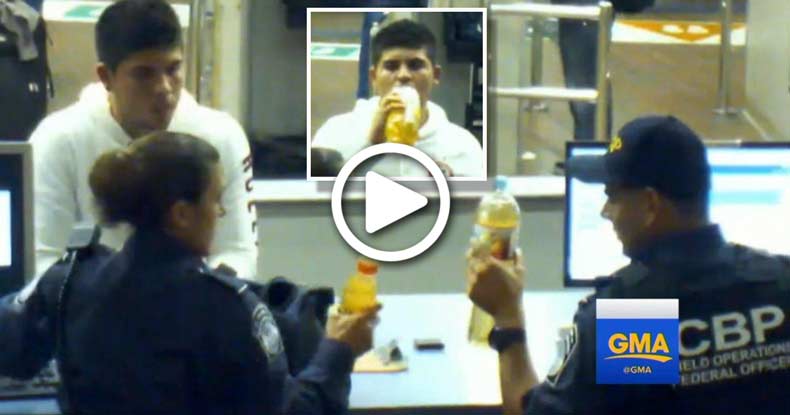 The video was obtained this week by ABC and it entirely contradicts the agents’ statements claiming the boy drank the meth on his own.

The boy, 16-year-old Cruz Velazquez, died within two hours of drinking the concentrated liquid meth. However, the two officers, Valerie Baird and Adrian Perallon, who enticed him to drink it remain on the job today and never faced disciplinary action.

According to ABC, a former head of internal affairs at U.S. Customs and Border Protection, James Tomsheck, told ABC News the two officers violated agency protocols by allowing the young man to drink from the bottle, and that he was told at the time they would be punished.

“If they truly suspected there was a controlled substance in the bottle,” Tomsheck said, “they should’ve conducted a field test.”

However, there was no field test. Instead, the officers used a human teenager as their lab rat and it cost him his life.

“Drug smuggling is wrong and is a crime, but this teenage boy did not deserve a death sentence,” Rep. Zoe Lofgren, the ranking member on the House Subcommittee on Immigration and Border Security told ABC News. “For CBP officers to inflict a summary death sentence is not only immoral but also illegal.”

“In order for CBP officers to prevent smuggling, ensure public safety, and do their difficult job at the border properly, CBP must have the appropriate protocols in place and officers must follow them,” Thompson told ABC News. “While there is no excuse for attempting to bring illicit substances into the country, it is absolutely clear from the video that there were numerous failures in judgement and procedure that led to the senseless death of a 16-year-old boy. CBP must ensure that such a tragedy never occurs again.”

After the teen’s death, an ‘investigation’ was conducted which cleared the officers of any wrongdoing. Both officers denied telling Velasquez to drink the meth and the official report called it an ‘accident.’

“What you see, I think, is a basic lack of compassion and decency toward a 16-year-old boy,” said Gene Iredale, the San Diego-based attorney who represented the Velazquez family. “Almost a delight that you would see in children who just pull the wings off flies slowly, a smile when he’s being asked to drink something and being put in this position.”

“They know what’s going on. This is a game in which he is being played with,” Iredale told ABC.

In the still image from the video below, we can see the officers encourage the teen to drink the meth. 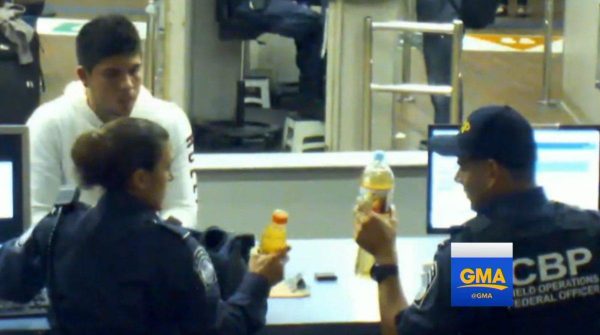 Once he drinks it, the officers laugh and encourage him to drink more. 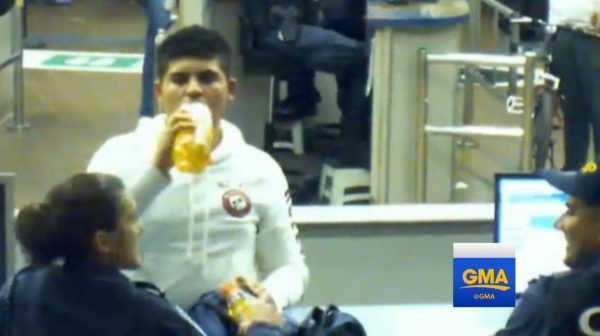 In total, the teen swallowed four sips from the bottle of meth — enough to send him into cardiac arrest and stop his heart. Minutes later, he began sweating and screaming in Spanish about “the chemicals” in the solution. “My heart! My heart!” he yelled, records showed. Officers waited more than thirty minutes before contacting EMTs. Two hours later, he would be pronounced dead.

Sadly, no one will be held responsible for his death — except for the U.S. taxpayer that is.

In March, taxpayers paid for the criminal negligence of the officers and the Velazquez family received $1 million to settle a lawsuit. The border patrol issued no apology, no admission of wrongdoing, and both officers testified that they never received so much as a slap on the wrist for their conduct.

“How can the government allow that? It’s like, ‘OK you can kill someone,’” Reyna Velazquez, Cruz’s sister, told ABC News. “They took him as a fool, as who cares. Well, that fool, he was the greatest person I ever knew.”