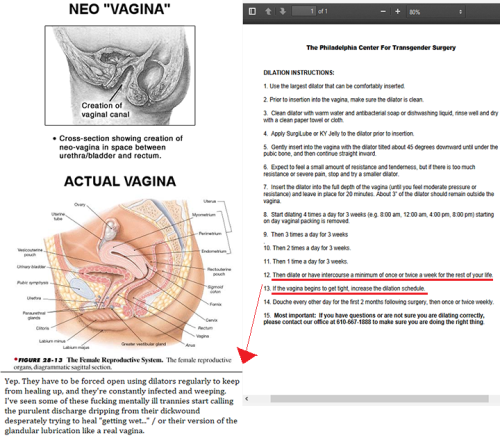 Have you wondered just what “gender reassignment” surgeons do to “create” a fake vagina for a severely mentally-ill man who imagines he’s really a she?

This video shows how.

In other words, the fake vagina is actually the man’s gouged-out penis that’s stuffed inside a surgically-contrived cavity or wound in the man’s pelvis.

Because the so-called “vagina” is actually a wound.

In a sane society, instead of getting paid mega-bucks, those surgeons would be arrested for medical malpractice — for cutting and dicing and outright mutilating otherwise healthy bodies.

But then 2017 America is not a sane society.

In America today, not only are sane people who refuse to submit to the “transgender” fiction condemned and vilified, taxpayers are compelled by government to subsidize these grotesque, body-mutilation surgeries via Medicare and in the military, and President Trump’s ending of Obama’s transgenders-in-military policy is met with sputtering outrage.

“Woe unto them that call evil good, and good evil; that put darkness for light, and light for darkness; that put bitter for sweet, and sweet for bitter!” –Isaiah 5:20.

We truly are living in an upside-down world.