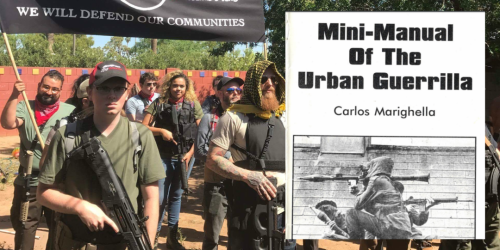 Redneck Revolt is a fast-growing Marxist organization that describes itself as a national network of “pro-worker, anti-racist” armed “community” militias, opposed to “white supremacy” and capitalism, and openly calling for “armed resistance” and “revolution”.

Founded in June 2016 in Kansas and Colorado, the organization claims to have more than 30 vetted branches all aimed at “working class liberation from the oppressive systems which dominate our lives”. Redneck Revolt recruits at gun shows and community events, advocates class war, contributes to the far left anarchist website It’s Going Down, and conducts armed anti-Trump demonstrations.

Redneck Revolt and other left-wing militants are praised by Mother Jones magazine and the UK newspaper, The Guardian.

“Redneck Revolt and other groups have pledged to resist right-wing extremists by any means necessary….

Redneck Revolt, a national network whose outreach has targeted right-wing militia members.
Redneck Revolt is just one among a handful of left-wing groups that have pledged to resist emboldened white supremacists and right-wing extremists through ‘direct action’ that sometimes goes beyond nonviolent protest—including picking up arms….
Redneck Revolt’s members can speak to their neighbors more easily than ivory-tower liberals, says Lucas Kelly, a member of the Phoenix chapter…. The group also runs firearms trainings. Last December, Kelly’s chapter sent members to a gun show, where they handed out posters tagged with the slogan ‘Fighting Nazis Is an American Tradition: Stop the Alt-Right.’”

Writing for The Guardian on July 11, 2017, Cecilia Saixue Watt extols Redneck Revolt as “the armed leftwing group that wants to stamp out fascism” and describes the group’s anti-Trump protests with signs such as “FUCK TRUMP!!!!”

“a nationwide organization of armed political activists from rural, working-class backgrounds who strive to reclaim the term ‘redneck’ and promote active anti-racism. It is not an exclusively white group, though it does take a special interest in the particular travails of the white poor. The organization’s principles are distinctly left-wing: against white supremacy, against capitalism and the nation-state, in support of the marginalized.”

As reported by Far Left Watch, “most alarming” are the propaganda and training manuals on “armed struggle” provided by Redneck Revolt on their website, including a 36-page Mini-Manual Of The Urban Guerrilla on how to conduct guerrilla warfare in U.S. cities, subdivided into sections on “sabotage”, “kidnapping”, “executions”, “armed propaganda”, and “terrorism”.

The Mini-Manual, containing a picture of Che Guevara, was written in 1969 by Carlos Marighella, one of the leaders of the Brazilian guerrilla organization National Liberation Action (NLA). Wikipedia describes Marighella as “a Marxist Brazilian writer, politician, guerilla fighter and terrorist,” who was an active member of the Brazilian Communist Party (Partido Comunista Brasileiro – PCB).

The Mini-Manual includes explicit instructions on how to conduct executions, kidnapping, sabotage, and terrorism (pp. 28-30).

H/t ZeroHedge and Will Shanley.