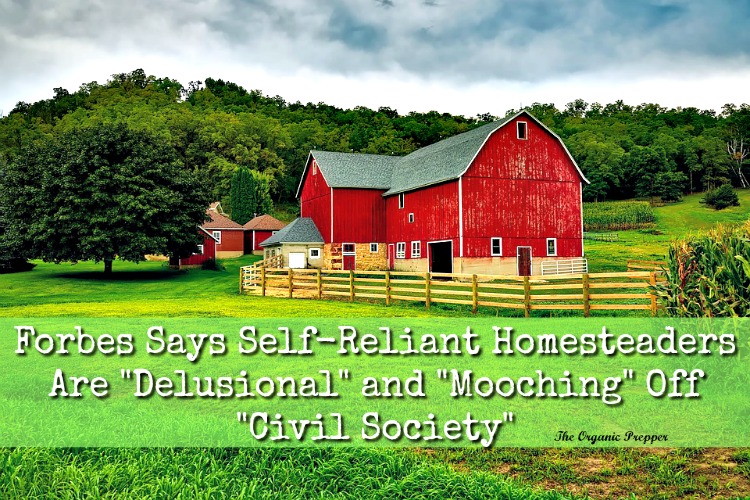 It’s always interesting reading when someone smug and sanctimonious writes a clueless diatribe about another group of people being smug and sanctimonious. So when I saw that an economist for Moody’s and Forbes had written an op-ed calling self-reliant homesteaders “delusional,” I knew I’d be in for some misinformed hilarity.

The article, entitled, “Dear Homesteaders, Self-Reliance Is a Delusion” was published a couple of days ago on the Forbes website. You’ll be forewarned that the article won’t be deep in the first paragraph, when the author presents his claim to knowledge about self-reliant living comes from the fact that he is “a big fan of shows about doomsday preppers, homesteaders, survivalists, generally people who live off the grid.”

And the well-informed opinion of this arbiter of self-reliance?

…there’s a central delusion in these shows that is never far from my mind when I’m watching these shows: off the grid people are not self-reliant, but instead are mooching off of the civil society, government, and safety net the rest of us contribute to…

The people in these shows often describe a very romantic vision of the lives they have chosen the ethos underlying it. They describe themselves as fully self-reliant, and criticize the rest of society as being dependent and lacking in this self-reliance. It is morally superior, the story goes, to provide for yourself, take care of your own needs, and often, be prepared to survive if society collapses.

First, let me segue a little bit and tell you about the author. According to his bio on Economy.com:

Adam Ozimek is an associate director and senior economist in the West Chester office of Moody’s Analytics. Adam covers state and regional economies, as well U.S. labor markets and demographics. Prior to joining Moody’s Analytics, Adam was Senior Economist and Director of Research for Econsult Solutions, an economics consulting company. He received his Ph.D. in economics from Temple University and his bachelor’s degree in economics from West Chester University.

So based on this, I’m going to guess that homesteading and off-grid living aren’t his jam. I mean, he might head down to the Westtown Amish Market there in Pennsylvania, but I’d be willing to place money on that being his closest brush with any real, live, self-reliant homesteaders.

His ill-conceived argument seems to be mostly focused on health care. He is baffled about what will happen if a homesteader becomes ill or gets injured.

” On Live Free Or Die, a man in his mid sixties named Colbert lives in the Georgia swamps alone….I always wonder what will happen if he slips and falls, and can no longer provide for himself. He’ll likely end up receiving hospital treatment paid for with Medicare, and perhaps end up in an assisted living center paid for by Medicare as well.”

“Another example from Live Free or Die is Tony and Amelia,  a couple who live on a simple, off-the-grid homestead in North Carolina. When I watch them I wonder what would happen if one became extremely sick, and simple, off-the-grid home medicine couldn’t treat them. Would they say “we’ve chosen our fate, and now we die by it”, or would they seek treatment in a hospital they couldn’t afford which would be covered by the hospital’s charity care or perhaps Medicaid?”

One thing that Dr. Ozimek is missing is the fact that most homesteaders are tax-paying citizens. Does he think that living on a homestead exempts one from property taxes? Does he suppose that their vehicles don’t have license plates or that their fuel is purchased without the requisite state gasoline tax? Or that maybe they have some special card that lets them buy things like feed without paying sales tax? Perhaps homesteading equipment like tractors and tools and off-grid appliances are likewise purchased without any gain to “society.”

As well, he’s under the assumption, based on his vast body of knowledge gleaned from watching TV, that self-reliant homesteaders don’t make any money or have any insurance. I know homesteaders who are retirees from other jobs who have a fine pension and excellent health insurance. I know others who make a good living with their homesteading endeavors. And there are still others who live simply after working for years to pay cash for their homestead, or families in which one spouse works a full-time job to support the homestead.

But, Ozimek, whose informed point of view comes from only the most extreme of the group featured on for-profit-and-ratings television shows, doesn’t understand that. He continues to espouse the superiority of the non-agrarian lifestyle:

If we all lived “self-reliant” lives like Tony often implores us, spending most of our time on basic agricultural subsistence, then modern hospitals couldn’t exist. It’s only because most of us choose to not live agrarian “self-reliant” lifestyles that this care would be available to Tony, Amelia, and perhaps someday, their children. And what if both of them become too injured to work the land anymore? Would they starve to death, or would they survive off of the social safety net our government provides, like food stamps?

In fairness to Tony, Amelia, and Colbert, perhaps they would refuse the modern medical care and modest safety net in the case of an accident or illness, and would simply choose to die. I don’t think most homesteaders would, but we don’t know.

Yeah, because homesteaders can’t do anything but homestead.

Ozimek thinks that someone with the extensive skills required to live off the grid would be completely unable to find employment and would have no option but to become a welfare recipient should their homesteading endeavor fall apart.

What he’s missing is that his cushy “civilized” lifestyle is completely reliant on the type of people he scorns. He forgets that someone, somewhere is growing his food. Someone, somewhere, is assuring that his energy reaches his home. Someone is ensuring that his plumbing works, someone is repairing his furnace if it breaks, and someone is transporting the goods he purchases to the store, where someone will sell him those goods.

But, that’s what happens when someone is only a consumer and not a producer. They think that producers are somehow less worthy, and that if they couldn’t produce what the consumers consume, they’d be totally out of options.

The cool thing about self-reliant homesteaders is that we aren’t one-trick ponies. We can produce all sorts of things and provide all kinds of services. It’s called “having skills.”

Since his entire argument is based on the tv programs he watches, the author doesn’t understand what self-reliance means to those of us who aren’t reality television stars.

But to someone who buys all of their food and other goods from the store and gets all of their medicine from the pharmacy, it can be difficult to understand the satisfaction that comes from evading those places.

Of course, if self-reliant homesteaders pass all of the Forbes columnist’s other tests, he can still dismiss their achievements by going full-blown statist.

Yet even if one refuses help and care, however, they still benefit from the modern civil society thanks to the private property protections, rule of law, and military that provide them with safety and security.

Many off-the-grid folks like to fantasize that their personal fire arms collection and self-defense skills are actually why they are safe. But how far would this take them in a society without the rule of law, an effective government, and law enforcement? The homesteader who is confident their security is in their own hands should go live off-the-grid in Syria and find out how far self-protection takes them.

And it’s not just police and a military that keep homesteaders safe. It’s also widespread prosperity. In the developed world, a basic education is available to all, and most people who want a job can find one. Living in a prosperous, modern economy means that homesteaders can take a good bit of their own safety from violence for granted and roving bandits are not likely to take their homes from them.

So, by the mere fact of our existence in this country, according to Ozimek, none of us are self-reliant. It boggles the mind that this fellow successfully wrote and defended a doctoral thesis.

This is how reliant people justify their reliance.

I guess what it boils down to is that this is what helps Ozimek and people like him justify living their lives without any practical skills. If things did go sideways in a long-term kind of way, who is going to be better off: a person who can claim a Ph.D. in economics or someone who can actually produce food?

The fact is, the less we require from society, the less power that society has over us. Our lifestyles give us some distance from the hustle and the bustle. We don’t have to make as much money because we don’t live in the consumer matrix that engulfs so much of society. We are content to live simply instead of hustling from one non-productive activity to another.

Most of us don’t eschew all the benefits of living in a modern society. It doesn’t have to be all or nothing. Having a corporate job doesn’t preclude growing your own tomatoes any more than having a herd of goats precludes having health insurance.

There is a joy in making a meal that came entirely from your own backyard that these people will never get to experience, and having spent many years in the corporate world, I can tell you which provides the most satisfaction for me.

In this society where nearly everyone is digitally connected 24 hours a day, it’s nice to step away from all that and break the addiction to constant stimulation. It’s nice to not always be trading the hours in your day for the things that someone else made while you were working on something that, if we’re being honest, is kind of pointless in the grand scheme of survival.

If Dr. Ozimek wants to talk about delusions and superiority, he could find all the inspiration he needs by taking a look in the mirror.